Fast radio bursts (FRBs) are one of the great astrophysical mysteries. They are brief, bright flashes of radio waves that last a few milliseconds. Despite happening frequently – thousands occur over the entire sky every day – only a couple dozen have ever been seen.

But we’ve found 20 more bursts, averaging one for every 14 days of observing, with the results published in Nature today.

There are two main reasons why astronomers like me are really excited by FRBs.

First, they represent a new, very unusual, unexpected phenomenon. The bursts come from other galaxies, meaning incredible amounts of energy are required to produce them – some bursts contain more energy than our Sun produces in decades.

Second, FRBs have the potential to be a new tool that we can use to understand the structure of matter in the universe.

The key property of the bursts that could turn them into a valuable tool is their dispersion: shorter (bluer) wavelength radio waves arrive at the telescope before the longer (redder) ones.

This dispersion is the result the radio waves passing through hot gas (plasma), which slows down the radio waves by an amount that depends on the wavelength. The amount of dispersion tells us how much matter the bursts have travelled through, and until now it has been unclear where that matter is.

An FRB’s journey to Earth.

A fast radio burst leaves a distant galaxy (see the video above), travelling to Earth over billions of years and occasionally passing through clouds of gas in its path. Each time a cloud of gas is encountered, the different wavelengths that make up a burst are slowed by different amounts.

Timing the arrival of the different wavelengths at a radio telescope tells us how much material the burst has travelled through on its way to Earth and allows astronomers to to detect “missing” matter located in the space between galaxies.

There are two places where this matter could be. It could be in the FRB host galaxy, in this case FRBs would be coming from relatively close galaxies.

The other, exciting possibility is that the dispersion is the result of matter in between galaxies. This matter, referred to as the cosmic web, is nearly impossible to study any other way. 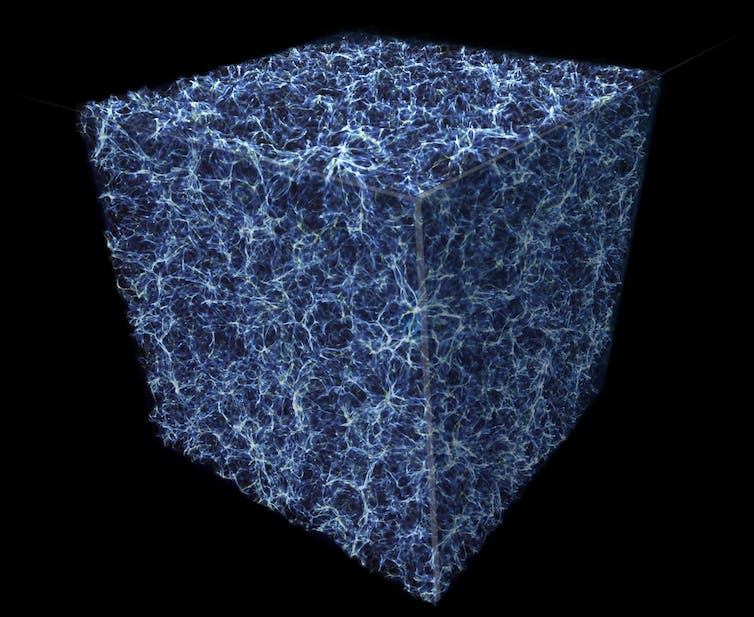 Cosmic web simulation. Galaxies and clusters of galaxies reside on filaments, which are separated by almost empty regions called voids. Surrounding the filaments is diffuse gas that can be probed by fast radio bursts. NASA, ESA, and E Hallman (University of Colorado, Boulder)

Figuring out where it resides is another outstanding problem in astronomy. In this case, the FRBs would be coming from more distant objects.

Our collaboration decided the first step to solve the FRB mystery was to find more of them, and find them quickly.

To do this we decided to go wide and simultaneously stare at as much sky as possible. We used the Australian Square Kilometre Array Pathfinder (ASKAP), a radio telescope in regional Western Australia that consists of 36, 12-metre dish antennas.

Each antenna is equipped with phased array feeds – radio cameras that would enable searches 36 times wider than could be seen with older technology.

We further widened the searches by pointing the antennas in different directions like a fly’s eye. While these searches would be less sensitive than those that found bursts previously, mostly with the 64-metre Parkes radio telescope in New South Wales, we were relatively confident bright ones existed in sufficient numbers that we should find more.

To conduct the searches, we used six to nine of the ASKAP antennas, while the rest were used for other observing projects. Our first discovery came after just over three days of observing, as mentioned earlier in The Conversation.

It turns out that we were a bit lucky to find the first one as soon as we did. I was responsible for scheduling the observing, which could run 24/7, and searching the data.

It was an exciting time, and I was very happy to be on the front line and be the first one to spot a new burst. Over the course of the next year, we found the 19 additional bursts reported. 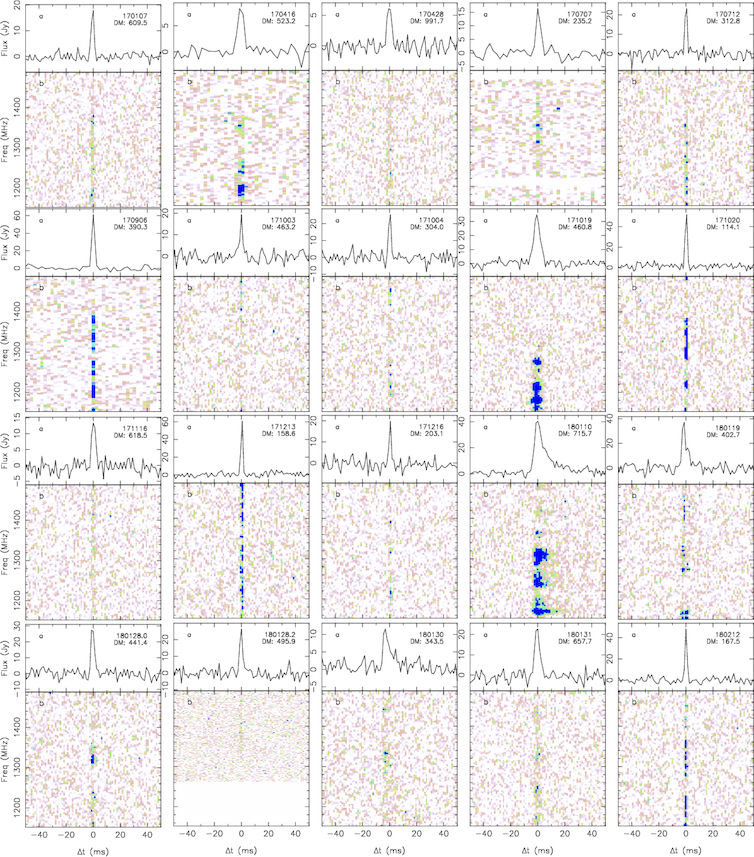 The ASKAP FRB sample. For each burst, the top panels show what the FRB signal looks like when averaged over all frequencies. The bottom panels show how the brightness of the burst changes with frequency. The bursts are vertical because they have been corrected for dispersion. Ryan Shannon and the CRAFT collaboration

Not the usual FRB

As the burst count started to rise, we noticed differences with the previously detected ones. The ASKAP bursts have less dispersion than the ones found at Parkes.

This, combined with the fact that the ASKAP bursts are much brighter, indicates that there is a correlation between burst brightness and dispersion. If all the dispersion was coming from within host galaxies, this would not be the case.

We were now able to confidently say that the bursts are experiencing the effects of the diffuse matter in the cosmic web. It also says that bursts are coming from vast distances – from galaxies half way across the universe.

A second key result of our survey is that none of the bursts repeated. As part of our searches, we observed the same regions of sky almost daily, and in total we had spent 12,000 hours (500 days) staring at the positions where we found FRBs.

This makes the bursts different than the best studied, known as FRB 121102 – aptly called “the repeater” – from which hundreds of pulses have been detected.

Are there two classes of FRBs? It can be scientifically fraught to subdivide phenomena such as FRBs into sub-classes when so few are known. But the differences between the repeater and the rest of the FRBs are starting to become too big to ignore.

The next step for our project is to commission a mode for ASKAP that can be used to localise bursts.

Instead of using the fly’s eye approach, we’ll point all of the antennas in the same direction, search for bursts in real time, and then make an image of the sky for the millisecond the FRB emission was passing by Earth.

We’ll be able tie bursts to host galaxies and accurately measure their distances. By combining the distances with the dispersions we’ll be able to start making a 3D map of the cosmic web.