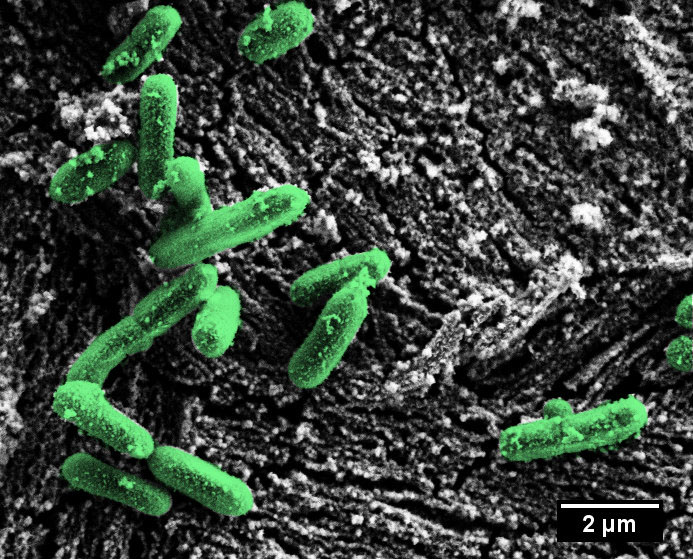 A biointerface is the region of contact between a biomolecule, cell, biological tissue or living organism or organic material considered living with another biomaterial or inorganic/organic material. The motivation for biointerface science stems from the urgent need to increase the understanding of interactions between biomolecules and surfaces. The behaviour of complex macromolecular systems at materials interfaces are important in the fields of biology, biotechnology, diagnostics, and medicine.

At Swinburne university, the study of the biointerface involve developing novel anti-fouling surfaces to control biofilm formation and understanding the interplay between adsorbing species and implantable surface performance.

Biocorrosion, also known as microbial corrosion and microbiologically-influenced corrosion (MIC), generally refers to the dramatically accelerated rates of corrosion that can be caused by microbes (bacteria, yeast, fungi, etc.) and which affects a wide range of materials and infrastructure. For example, MIC is common in marine environments (e.g. shipping, port infrastructure) and can greatly increase the cost and duration of maintenance procedures, and reduce the availability of marine assets. In a worst case scenario, MIC can degrade the structural integrity of marine assets with consequent risks to both the platform and loss of human life. Key example areas in which MIC has been found to be an issue are in the hulls, tanks and piping systems of maritime vessels. Overall corrosion has been estimated to cost the world economy ~3.5% of GDP, with ~20% of these costs likely to be attributable to MIC, which for Australia equates to ~$13 Billion for 2017 alone. For further information on the impact of corrosion: http://impact.nace.org/economic-impact.aspx

Research into MIC at Swinburne covers a range of topics from fundamental aspects right through to applied field studies. This includes: