A new rust treatment gets its sea legs

A new rust treatment gets its sea legs
Research Impact

A new rust treatment gets its sea legs

The cost of fixing the effects of corrosion on Royal Australian Navy vessels hit an estimated $516 million in 2015 - nearly 40% of the navy’s total maintenance budget. Associate Professor Scott Wade, from Swinburne’s Bioengineering Research Group, and his industry collaborators, think they can slash that figure with a dense coating designed to protect some of the expensive moving parts of naval vessels.

The team has created a high velocity oxygen fuel (HVOF) thermal spray coating, comprised of powdered metals and other compounds, such as tungsten carbide, nickel and cobalt chrome that are known for their durable and protective properties. The HVOF coating process involves using “a giant flamethrower” to create extremely high temperatures and speeds - roughly 2,000 degrees Celsius at 800 metres per second.

Both the composition and the spraying process are crucial. “The spray hits the surface and solidifies, creating an extremely well-adhered coating,” explains Wade. Optimising spray parameters such as temperature and velocity results in the dense coating layers that have few air gaps between the particles, making sea water less likely to enter and cause corrosion.

“Corrosion is a significant problem worldwide,” adds Wade, an applied physicist who has been looking at corrosion for more than 15 years. He started out developing optical-fibre based sensors to monitor corrosion in aircraft, and over the years has carried out corrosion research for big industry, as well as port and harbour authorities.

Marine environments are harsh, he notes. In addition to being exposed to the weather and rust-inducing salt, biofouling “occurs when you put anything in an immersed environment and a combination of microbes, plants, algae, and animals attach to the surface”. These marine hitchhikers increase drag, slowing vessels, increasing fuel consumption and breaking parts. They also release corrosive gases, such as hydrogen sulphide, or make the pH of underlying metal surfaces more acidic and prone to corrosion. Wade explains that the chemicals are all just “part of [biofouling species’] natural metabolism, by-products of them converting food to energy”. However, they’re not usually good for man-made structures. 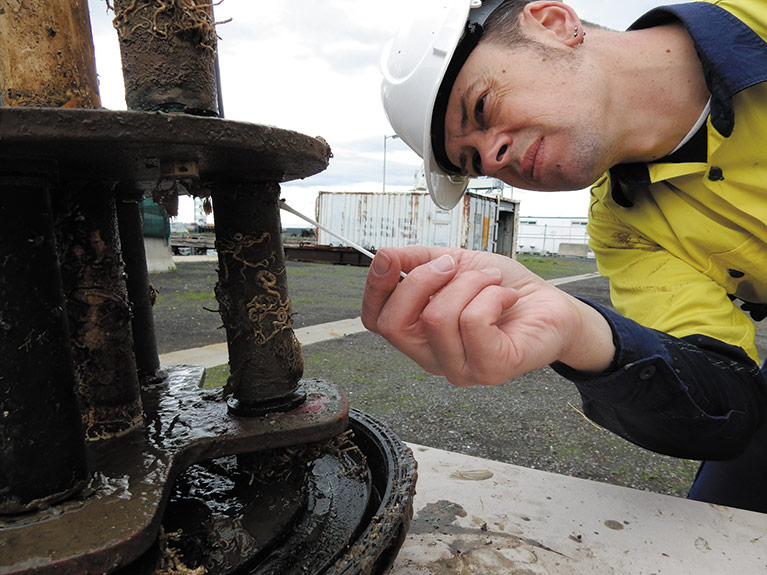 Every vessel in the navy’s nearly 50-strong fleet, ranging from surface warships to submarines, is vulnerable to corrosion or biofouling. So, five years ago, Wade and a team at Swinburne began working on better coatings with collaborators from the Defence Science and Technology Group (DST), Defence Materials Technology Centre (DMTC), the engineers, MacTaggart Scott Australia, and United Surface Technologies (UST). Because of long-standing ties with DST, DMTC, and UST, Wade says the collaboration happened organically. “We all just came together out of a mutual interest,” he says.

Anti-fouling paints, coatings, and surface treatments, must be non-toxic to the environment, adhere well, and be resistant to high-contact degradation, both chemical and mechanical, says Wade. The last criteria is especially key when it comes to hydraulics, the workhorses of a ship, where pressurised fluids are used to generate a large amount of power in order to carry out various tasks. “There are many critical hydraulic systems used in marine vessels, such as in hatches and doors, steering, stabilising, and propulsion systems,” he says. “If these systems undergo biofouling, they can easily be damaged or stuck, which renders them, and sometimes the ship, inoperable.”
MacTaggart Scott, the company that provides marine hydraulics to the Australian navy, has been grappling with biofouling and corrosion-related failure for years, says Wade. They have been working to overcome issues, especially in light of relatively new structures, such as landing helicopter docks on ships. “One of the problems with building new ships is a lack of knowledge about possible corrosion problems. So, the ships get built and then the problems come up, and companies like MacTaggart Scott need help to solve them.”

One difficulty for engineers is that removing biofouling creates a new set of problems. “They tried to clean off the fouling, but in doing so would damage the underlying protective coating, which accelerated corrosion,” says marine scientist Dr Richard Piola from the DST, a government-funded organisation for national security research and development. Piola has been working with Wade’s team for the last four years.

“So, it’s kind of damned if you do, damned if you don’t,” he says. The solution was clearly a better type of coating. Antifouling agents commonly used today, such as hard chrome plating and smooth paint coatings, which make it difficult for organisms to attach to surfaces or remain attached when the vessel is travelling at high speeds, just aren’t good enough when it comes to protecting hydraulic components “where you need hard, high-wear coatings”, says Wade. Ceramic coatings like aluminia-titania, for example, are good at withstanding wear and are generally corrosion resistant, but tend to be brittle and are easily removed when biofouling is scraped off surfaces. In addition, other coatings that contain copper, zinc or tributyltin can be toxic to all marine organisms, not just biofouling species.

The group have already verified their new HVOF against industry standards, using a mixture of hot water immersion and salt spray, among other testing methods.
In a series of long-term field trials carried out between 2015 and 2019 in Adelaide, Melbourne, and Cairns, which provided a range of environmental conditions and water temperatures, scientists immersed more than 100 HVOF-coated samples - including rods and full hydraulic actuator prototypes. “The findings were overwhelmingly positive,” says Wade. Control rods covered in conventional ceramic coatings accumulated significantly greater levels of biofouling compared to the HVOF coatings.

In October 2018, the technology was applied for the first time in a real setting. Safety rails aboard the main deck of HMAS Canberra, the Royal Australian Navy’s flagship, were sprayed with HVOF, while others were given the traditional electrolytic hard chrome (EHC) coating.

“More than nine months after installation, the HVOF coatings have shown significantly improved resistance, with virtually no corrosion at all, compared to EHC-coated components, which were badly corroded after only a few months,” says Wade. The trial continues, and the team hopes it will provide a good long-term assessment of the technology.

The researchers also want to see if HVOF coatings can be used on different components (such as propeller shafts) and other marine vessels (like submarines), or if it can help with other problems. MacTaggart Scott Australia and United Surface Technologies, are also in talks to commercialise the technology.

In October 2019, the collaboration won two national awards - the National Defence Innovation Award and the Innovation Award for Platforms and Propulsion - at Pacific 2019, an international exposition for the maritime and naval defence forces, run by Australian government agencies.

Wade says: “As a research-intensive academic, it’s not often you get to work on a project from initial blue-sky conception all the way through to developing a commercially viable product.” The self-professed ‘rust lover’ adds that despite his battle with it, “microbial corrosion is amazing: it involves chemistry, microbiology and metallurgy. I love working on problems that have a practical application, while also being able to look into the fundamental science at the same time.”