Have you noticed your Facebook feed looks different lately?

It’s a bit more “zen”, uncluttered and faster. Instagram-like story posts are displayed first, and a separate feed allows you to keep up with the latest activity in your groups.

Someone has assembled a ring of comfy chairs in your lounge room and invited the local mums and bubs group over for hot cocoa and biscuits. Even the hearts are squishier. 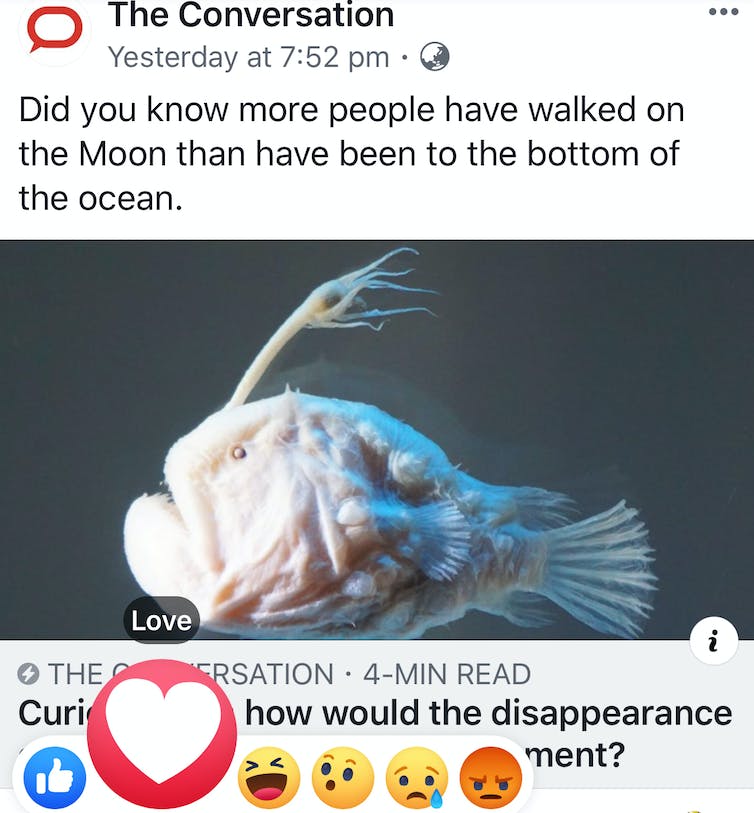 According to Facebook’s CEO Mark Zuckerberg, it’s “the biggest change to the app and website in the last five years”.

This cosmetic change could represent the first step in Facebook’s “privacy pivot” announced in March 2019. But we’re still waiting to hear exactly what will be happening with our data.

Facebook has been under immense pressure from both the Federal Trade Commission in the United States, and governments around the world in the wake of a string of privacy scandals (including Cambridge Analytica).

After live-streamed terrorism in New Zealand, Jacinda Ardern is leading a global charge for regulation and oversight. The recent Christchurch Call meeting resulted in tech companies and world leaders signing an agreement to eliminate terrorist and violent extremist content online.

Everyone is piling on Facebook, even Zuckerberg’s original platform co-founder Chris Hughes.

Hughes said “it’s time to break up Facebook” and “the government must hold Mark accountable”. He was referring to the huge power Zuckerberg holds through controlling the algorithms that keep Facebook – and more recently acquired platforms Instagram and Whatsapp – ticking over. Those algorithms functionalise Facebook’s vast body of user data.

Zuckerberg admits that changes must be made, saying in April:

I know we don’t exactly have the strongest reputation on privacy right now, to put it lightly.

Facebook’s business model is built on harvesting platform data about its users, crunching that to generate behavioural inferences like “divorced, male, no children, interested in weight loss”, and then selling this package to advertisers.

In its defence, it doesn’t sell identifiable data, and it has clamped down on developer access to its data.

That’s because developers are not the customer – nor are the users who are clicking on like buttons or buying yoga pants. Facebook’s customers are advertisers.

Facebook sells one product: a powerful capacity to personalise and target ads that is unparalleled in any other platform. This turned a profit of US$16 billion in the last quarter of 2018.

It seems reasonable to assume it’s going to do everything it can to protect its ability to keep collecting the raw material for that profit.

[…] there are still many open questions about what metadata we will retain and how it may be used. We’ve committed to consult safety and privacy experts, law enforcement, and governments on the best way forward. 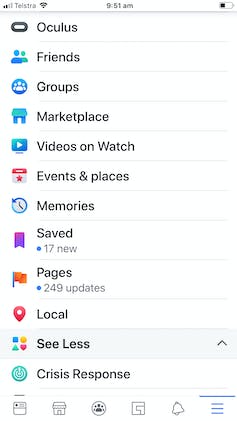 You can now easily navigate straight to Groups, Marketplace and Watch on Facebook. Screen shot June 4 2019

At a developer conference last month, Zuckerberg outlined his proposed changes: mainly, change the focus to communities and privacy, make messaging faster and encrypted, and transform the user experience.

The square logo is now a circle. There’s a lot of white space, and someone KonMari’d the title bar.

Shopping within Facebook is prioritised through the Marketplace feed, and you can watch shows and online videos in groups through the Watch function.

Facebook Messenger loads faster, the interface is cleaner and a dating service may soon be available in Australia.

What hasn’t changed is the core product: the capacity for Facebook to collect platform data and generate behavioural inferences for advertisers.

By Belinda Barnet, Senior Lecturer in Media and Communications, Swinburne University of Technology. This article is republished from The Conversation under a Creative Commons license. Read the original article.