Smart cities promise efficiency and resilience in urban design to combat climate change, population growth, transport congestion and other wicked problems. The processes that run a city may be abstracted into algorithms that feed on big data, their design optimised for efficiency, commuting, work and other purposes.

This is a positive development for urban spaces, but does this approach overlook other human needs?

While research centres and urban designers are installing sensors, trackers and cameras on every street corner, game designers and artists are using a cornucopia of technologies to bring back an old idea – playing on the street. I have developed one such game for Melbourne International Games Week.

Everyone knows what play is, but as adults we often forget how to play or trivialise its significance. Play is a particular way of being, a different way of seeing the world.

The idea of play as pointless fun is challenged by the designers of serious games who remind us that it is fundamental to learning. We play with possibilities, see how something plays out – this allows us to explore alternative realities and to see familiar situations in a new way.

Play also creates social bonds, connection and community through these shared experiences. Play activates cities and engages people. It appropriates and takes over urban space, changing what it means to people.

Playful citizens can then see their town or city in a new way, feeling a new sense of connection, and sensing new ways it could be.

Not entirely a new idea

While children used to play routinely in cities before the age of digital distraction, adult play in cities is not entirely a new idea. The emergence of the modern city in the 1900s led to changes in how people engaged with and experienced public space in the form of promenading and other social play.

Further reading: Waiting: rediscovering boredom in the age of the smartphone

Last century, the playground was invented as a site designed for play. During the 1960s, the Situationists deployed play in cities as a strategy for subversion. And in the 1970s the New Games movement developed outdoor play as a community-building process.

What is a playable city?

Play creates alternative ways of seeing the world. This involves not only changes in data, but changes in attitude and how we feel in cities. These are things that are harder to achieve with other design strategies in public spaces.

We all know what a game is – we are living in a time with the highest level of play literacy. Participation in games continues to rise, with 68% of Australians playing video games.

Play is often structured through technology. We may recognise that the city has rules, but those rules become changeable through an invitation to play. Games provide new rules of engagement.

Cities are in process, in flux. Although on the surface they are made of concrete, data, steel and glass, they are equally made of people and culture.

Playable cities appropriate smart cities infrastructure to engage people with their city and with one another. It’s a form of “hacking” urban space. Through a shared sense of community and ownership, visitors, residents and workers in playable cities may then become part of the conversation about urban design.

In this way, smart cities and playable cities may inform each other and provide a new creative platform for artists and designers. Developing encounters in a playable city blends disciplines such as urban design, public art and game development into a hybrid practice situated in urban space.

Technologies like augmented reality sit alongside live theatre, as players move between looking at the screen of their mobile to one another, observing the spaces of the city, or drifting through information architecture.

Further reading: With iPhone X, Apple is hoping to augment reality for the everyman

Invitations to be citizens of play

This approach recognises the multilayered nature of urban space, its complexity, possibilities and how these can be remapped into a playful experience. This happens through mobile phones, signs and ciphers hidden in laneways, large public screens and through the changes in the behaviour of players and the attitudes of those who watch them play. 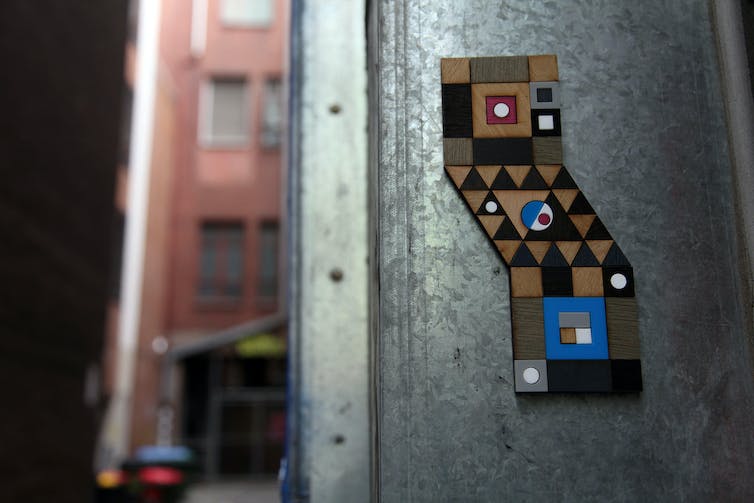 With signs and ciphers hidden in laneways, the physical and digital worlds come together in the playable city. Author provided

Cities have always been melting pots of possibility, places that we go to rediscover ourselves - some of their major contributions to the cultural economy are community, connection and creativity.

If that sounds too utopian as we reach peak popularity in dystopian fiction, then perhaps all this play is simply training for the apocalypse – zombie survival runs are a popular genre in street games.

Playable cities do not delineate sites of play but blend this activity with the daily operation of the city itself. Sometimes it is overt, where player behaviour challenges existing rules and conventions of public space and, as a result, transforms the meaning of the site in question. More often than not it is covert, play in secret.

In this way, play persists in cities despite mass surveillance and urban alienation. It’s emerging in opposition to these as a coping strategy that draws attention to the many tensions in cities today: connection and alienation, actual and virtual, digital and analogue, public and private, civic and corporate. Come and join the big game.

You can experience Melbourne as a playable city with Wayfinder Live 2017, a mixed-reality mobile game that explores Melbourne’s laneways and streets to unlock a hidden city. The author developed Wayfinder for Melbourne International Games Week, Asia Pacific’s largest digital games festival, from October 22-29.

Written by Troy Innocent, City of Melbourne Knowledge Fellow 2017-18, Senior Lecturer in Games and Interactivity, Swinburne University of Technology. This article was originally published on The Conversation. Read the original article.