The star of this year’s reality television show, The Bachelor Australia, is astrophysicist Dr Matt Agnew, but the nature of his job has left some contestants confused. Astrophysics is the study of everything in the universe, as astrophysicist, Dr Rebecca Allen and PhD Candidate, Renee Spiewak – both from Swinburne’s Centre for Astrophysics and Supercomputing - explain.

“An astrophysicist might study galaxies, planets, stars or other celestial objects such as black holes and asteroids,” says Ms Spiewak, whose PhD relates to pulsars, otherwise known as ‘dead’ stars.

“For as long as we have looked up in the night sky, we have always wondered what is out there, how does it work and what does it mean,” says Dr Allen.

“Astrophysicists seek the answer to these questions about our universe and help us understand our place in it.”

“That’s why astrophysics is something that is core to us a human beings because ultimately we are part of the universe, so we want to know more about our place in it.” 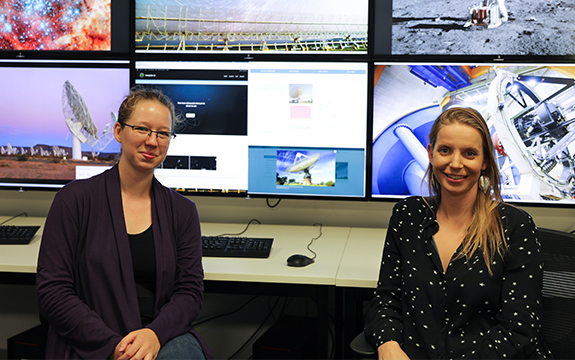 The Centre for Astrophysics and Supercomputing's Renee Spiewak and Dr Rebecca Allen.

How to become an astrophysicist

So, what does it take to have a career using the laws of physics to explain the birth, life and death of everything in our universe?

“The short answer is, to become an astrophysicist you have to work really hard,” says Dr Allen.

“You have to want to challenge yourself and you have to really enjoy learning and problem-solving.”

“To become an astrophysicist you have to get your credentials so you can prove to the scientific community that you understand what it is to make real science.”

“This involves a lot of studying,” says Ms Spiewak. “Typically, you start with a Bachelor’s degree in Astronomy, Physics, or even Engineering or another related field.”

“Then, you do a Master’s degree or go straight into a PhD in Astrophysics, like I am currently doing.”

The terms ‘astronomer’ and ‘astrophysicist’ are often used interchangeably. However, there is a difference between the two.

“They look at the night sky and collect data about objects in the universe.”

“Astrophysics includes astronomy, but it is a bit more than that,” says Ms Spiewak.

“Astrophysicists analyse this data and try to make sense of it using physics.”

“I’m an astrophysicist”…“Okay! I’m a Gemini”

Astrology relates to the movements and positions of the stars and planets, but it is not the same as astronomy or astrophysics.

“When we look up at the night sky we can often see patterns of stars, which are what we call constellations,” says Dr Allen.

“Sometimes, people try to attribute meaning to our lives based on the movement and positioning of the stars, but that’s not really science.”

“Very little of what happens in the universe actually affects us here on Earth,” says Ms Spiewak.

“However, it did affect how we came to be, so while the stars do not influence our lives, I do think in some ways us humans trying to take stars and make them ours is quite cool.”

There have been some important discoveries in astrophysics this year, which Swinburne has made a significant contribution to.

In June, Swinburne astrophysicists Dr Adam Deller and Dr Ryan Shannon were part of an Australian-led research team which, for the first time, determined the exact location of a powerful one-off burst of cosmic radio waves known as ‘fast radio bursts’.

Fast radio bursts last less than a millisecond, making it difficult to accurately determine where they come from. However, using the Australian Square Kilometre Array Pathfinder (ASKAP) radio telescope in the Western Australian outback, the team was able to pinpoint the location of a fast radio burst to a galaxy almost 4 billion light years away.

This month, Dr Deller was also part of a group of Australian researchers who discovered an improved way of measuring the universe’s expansion rate.

The team used gravitational waves, generated by a fiery star collision, to refine the measurement of what’s called the Hubble constant. The Hubble constant not only explains just how fast the galaxies are stretching, but could also help solve decades of disagreement about how old and how big the universe is.