Construction is one of the largest industries in the world economy – worth A$10 trillion globally (equivalent to 13% of GDP).

But construction has suffered for decades from remarkably poor productivity compared to other sectors. While agriculture and manufacturing have increased productivity 10-15 times since the 1950s, construction remains stuck at the same level as 80 years ago.

That’s because construction remains largely manual, while manufacturing and other industries have made significant progress in the use of digital, sensing and automation technologies.

We and other research groups see 3D-printed concrete as a possible solution to these problems. The technique will likely also give architects the freedom to inject more creativity into their designs for new structures.

Our modern civil infrastructure is almost entirely built with concrete. We use more than 20 billion tons of concrete per year. The only material we use more than that is water.

There are also difficulties in quality control at construction sites, high levels of waste and carbon emissions, cost blow-outs, and challenges in managing large worksites with a vanishing skilled workforce.

Disruptive technologies such as 3D concrete printing can offer solutions. 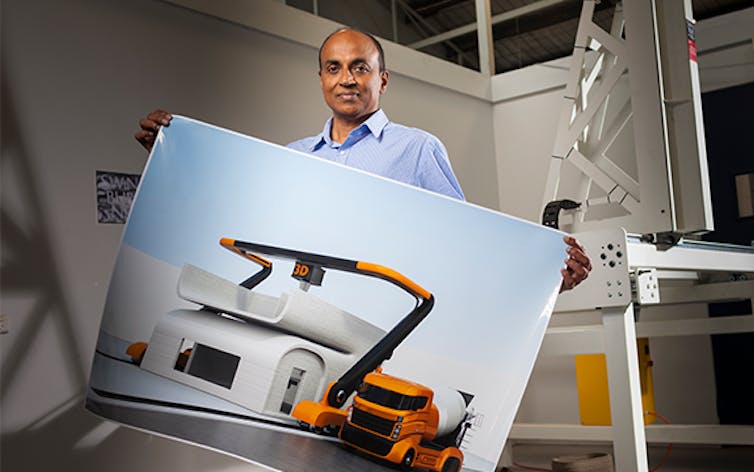 The benefits of 3D concrete printing

Conventional approaches to construction involve casting concrete into a mould (known as formwork). But additive construction combines digital technology and new insights from materials technology to allow free-form construction without the use of formwork.

Eliminating the cost of formwork is the major economic driver of 3D concrete printing. Built using materials such as timber, formwork accounts for about 60% of the total cost of concrete construction. It’s also a significant source of waste, given that it is discarded sooner or later. According to a 2011 study, the construction industry generates 80% of total worldwide waste.

Pouring concrete into formwork also limits the creativity of architects to build unique shapes, unless very high costs are paid for bespoke formwork. Free-form additive construction could enhance architectural expression. The cost of producing a structural component would not be tied to the shape, so construction could be freed from the rectangular designs that are so familiar in current building architecture.

What we could build

3D concrete printing is being explored for use in the construction of houses, bridges, buildings and even wind turbine towers.

This 3D-printed concrete house was built in 24 hours during a harsh Russian winter. It was the first such house to be built in a single location.

An 8-metre 3D-printed concrete bridge for cyclists was unveiled in the Netherlands last year. The bridge, which was printed by Eindhoven University of Technology, has more than 800 layers and took three months to print.

3D concrete printing has an advantage over conventional construction methods when it comes to building non-rectilinear shapes, such as curved shapes with intricate details.


Each block of this freestanding structure is printed using a special cement composite.

This field of research is still in its infancy.

The biggest hurdle in the development of concrete 3D printing is the concrete itself. Conventional concrete in its current form is not suitable for 3D printing, so new and innovative alternatives need to be developed.

Researchers are exploring various types of concrete. The concrete for 3D printing must not set when it’s inside the printer, but it needs to set and strengthen as soon after it is extruded as possible. This kind of concrete is called “set-on-demand”.

When it comes to actually printing the concrete, special printers are needed. Typically, the size of the printer needs to be larger than the component being printed. However, researchers are exploring printers or robots that can “climb” on parts of the concrete that are already set in order to print other sections. 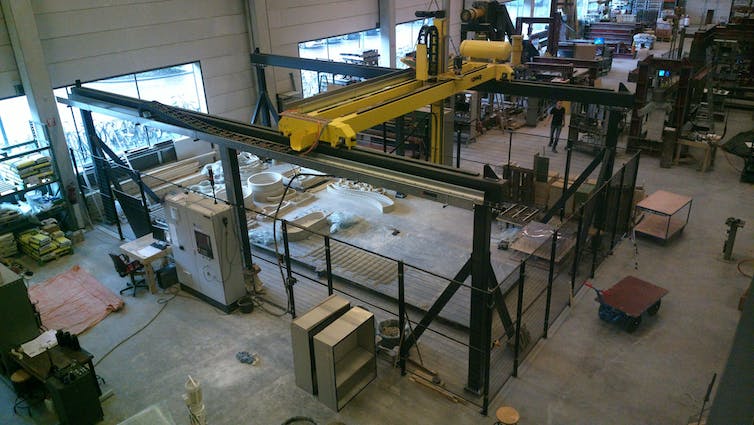 International researchers and industry experts will gather at the First International Conference on 3D Construction Printing at Swinburne University of Technology in Melbourne from November 25-28.

Written by Jay Sanjayan, Professor, Swinburne University of Technology. This article is republished from The Conversation under a Creative Commons license. Read the original article.