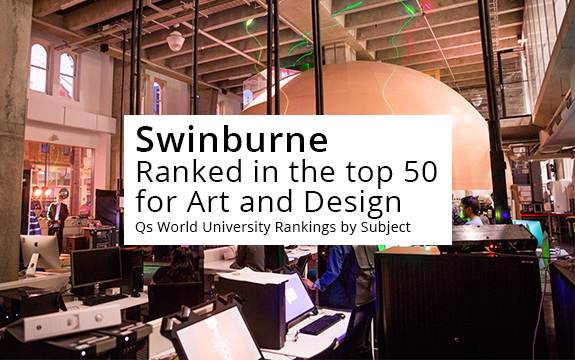 Ranked at equal number 40 for Art and Design, Swinburne has improved by more than ten places since 2017.

Swinburne’s School of Design has again been recognised as one of the best in the world by the QS World University Rankings by Subject.

Ranked at equal number 40 for Art and Design, Swinburne has improved by more than ten places since 2017.

Pro-Vice Chancellor of Swinburne’s Faculty of Health, Arts and Design, Professor Scott Thompson-Whiteside, says the university is proud of this result.

“Swinburne’s School of Design continues to be recognised for producing quality, career-ready graduates, high levels of industry engagement and international collaborations with some of the best design schools in the world,” says Professor Thompson-Whiteside.

“These rankings also reflect the strength of Swinburne’s design research and ability to integrate design with other disciplines across the university.

“Our undergraduate, postgraduate and research programs bring together students, industry and researchers to produce outcome-focussed projects, not only in Melbourne but internationally as well.”

Design continues to be an important part of Swinburne’s research activities. Recent highlights from Swinburne’s Art and Design area include:

Swinburne continues to improve its position across the ranked subject areas. It is now ranked in 10 subjects, compared with six in 2016.

Other notable Swinburne rankings in the QS World University Rankings by Subject include:

Swinburne has been recognised in two new subjects for the first time in 2018:

The QS subject rankings draw on a methodology similar to that used for the overall QS World University Rankings, with institutions scored for academic reputation, employer reputation and research impact.