The movement of people into cities has accelerated over the past 40 years. In 1999, 47% of people lived in cities, but by 2030 it’s expected to be 61%. Meanwhile, cities account for 70% of global greenhouse gas emissions. Since 2007, the Economist Intelligence Unit has reported that average liveability scores across 1240 cities declined year-on-year. The most recent report pointed to an overall deterioration in culture and environment scores, reflecting problems such as increasing air pollution. Fortunately, cities are “mobilising to take the lead in the battle against climate change, while at the same time ensuring they are liveable places for a fluid population,” says Professor Niki Frantzeskaki, Director of Swinburne’s Centre for Urban Transitions.

Frantzeskaki says that the importance of greenery in urban areas is becoming more apparent in efforts to make them more equitable, healthy and productive. She points out that street trees and parks intercept dust, toxins and noise. They also have cooling properties, create carbon sinks, buffer flooding, contribute to species conservation, increase biodiversity, and can be useful for waste management. Socially, they provide opportunities for healthy recreation and spaces that can help build resilient communities.

Creating more of this in cities, “can mean anything from creating green corridors of parks and cycleways linked in ways that help species to move across urban spaces, to building floating gardens that help filter water and support biodiversity”.

Social economist, Associate Professor Andi Nygaard, says that nature has long been seen as valuable in Australian cities. At the Centre for Urban Transitions, he’s compared property prices and green spaces in Melbourne over more than 150 years.

“We know that trees and vegetation are good for absorption of carbon, and evidence suggests it also has a beneficial impact on people’s wellbeing, on levels of stress and their ability to relax,” he explains.
He also stresses that Melbourne needs to work with its environment. “The western plains are not great at absorbing water, but if we are also putting houses on them and sealing the surface completely, we are restricting the ability of that water to penetrate. This means the ground will sustain an even lower level of biodiversity.”

Europe also recognises these natural values. Until recently, Frantzeskaki helped lead one of Europe’s most ambitious research programs aimed at creating more space for nature in cities. In 2016, while at Erasmus University Rotterdam in southern Holland, she helped found the Connecting Nature research project. This AUD$22 million (€14 million) program was funded by the European Commission’s Horizon 2020 Innovation Action Program and is a partnership of 31 organisations across 16 European countries, as well as Brazil, China, Korea and The Caucasus.

Among other initiatives, the project is creating a group of ‘front-runner’ cities that are working to restore natural values to cities, and foster peer-to-peer learning to deliver these large-scale solutions elsewhere. For example, the Polish city of Poznań created a corridor of urban gardens in public areas, such as schools and housing estates, connecting existing parks, green walls and rooftop gardens — all of which will help flora and fauna propagate more successfully. “Instead of having pockets of green, they introduced new green areas to connect all these different patches,” explains Frantzeskaki. Another Connecting Nature project created municipal ‘beaches’ for the community along Poznań’s Warta River.

Connecting Nature plans to use these projects as case studies to look at how networks can create change, and figure out what works, looking at everything from financing and digital resources to mustering community support for research. The group also recognises the need to identify the potential for introducing problems, such as exacerbating gentrification or providing habitat for disease vectors. In 2019, the Connecting Nature team was invited to speak at the United Nations about how various business models can underpin these projects and the process of translating research into practice.

Frantzeskaki, who moved to Swinburne in 2019, says that Australia is now a particularly exciting place to work, with four cities, Melbourne, Perth, Brisbane and Sydney, currently among the most rapidly growing in the Organisation for Economic Co-operation and Development (OECD). Because of this, she says, Australia has the opportunity to forge a new path, and for cities to develop unique ways of dealing with rapid growth to stay on top of liveability rankings.

The right responses could mean Australia is also better prepared for pending global change, she adds. “It’s also about taking into consideration that we are going to face big disruption in cities and the global economy, with automation, biotechnology, digital fabrication, virtual reality, for example. So how cities can embrace these changes and prepare for new urban economies is very important.”

Guiding the millions of people in a metropolis towards sustainable development isn’t easy, Frantzeskaki acknowledges. It’s a particular challenge in Melbourne, she says, for example, where the median cost of a house is now 7.1 times the median annual household income, an increase of more than 470% since 2001. “It’s hard to prioritise green space in a city that suffers from an increasing shortage of affordable housing,” she points out.

Researchers working on Swinburne’s ‘Greening the Urban Greyfields’ project are collaborating with communities, urban planners and local councils, a process called co-creation, to find ways to allow for green space alongside housing growth.

‘Greyfields’ refers to parts of middle suburbia where infill (altering existing, developed land to densify development) and subdivision are reducing green space and trees to make way for driveways and concrete. But to maximise infrastructure resources, such as schools and roads, the State Government of Victoria has set Melbourne a target of increasing housing on developed land by 70% by 2051.

The strategy faces problems on two fronts: it’s creating concrete greyfields, and Melbourne, like many other Australian capital cities, is also struggling to achieve its infill targets. The vast majority of development is either high or low density, rather than a sometimes desirable middle ground. From 2005 to 2016, greyfields accounted for 46% of infill projects, yet only amounted to a 19% net increase in dwellings. “A nostalgia exists for freestanding houses and backyard barbecues,” explains Dr Stephen Glackin, a Senior Research Fellow at the Centre for Urban Transitions.

One solution to improving infill, says Glackin, is to amalgamate smaller blocks of land into bigger lots that are sold to developers. “If you have more houses together you don’t need four driveways anymore, you only need one,” he explains. “You don’t need to have a division of land to get a tiny little garden, you can make decent-sized ones.” It can also mean sellers make more money than if they had sold their block individually. Generally, statutory regulations are the biggest bottleneck to innovative design, says Glackin, who, with his colleagues, has been working closely with the Maroondah City Council, 25 km east of Melbourne’s CBD, to find solutions.

The challenges — and there are many — include finding adjacent homeowners who are willing to amalgamate and sell, and ensuring any building on that amalgamated land serves the needs of the local community.

Recently, illegal tree removal due to building has also been a concern for the Council. In a few years, Maroondah will introduce statutory planning regulations for amalgamated blocks that favour community-minded developers. The council will also mandate more trees, an aim being incorporated into Maroondah’s housing strategy and is in the process of being introduced as a planning scheme amendment.

“We’ve done an incredible amount of community engagement, and we’re pleased with the responses,” says Dale Bristow, team leader of strategic planning and sustainability at Maroondah City Council. Getting the community, politicians, bureaucrats and property owners on board with changes to planning schemes and regulations hasn’t been easy, he says. But this support is key to prevent conflict, delays and negative feedback loops that block their plans.

“Planning control alone will not make this a successful project,” says Bristow. “We recognised that right from the outset, so we established a community advisory group to test the academic and planning ideas that we’re all coming up with.”

The right incentives for developers can also help with what’s called ‘precinct additionality’, says Glackin, where the right plans for developments can be leveraged to improve the whole local area. This can help win over reluctant neighbours.

Incentives for developers to engage in research consultation processes are being piloted in two precincts — Maroondah, and the City of Blacktown in Sydney. The hope is that they will create buildings that actually offer solutions. “You can amalgamate as much as you like, but if you don’t build the right stuff you don’t get the benefits,” says Glackin.

Glackin gives the example of a neglected park in the inner-city suburb of North Melbourne that was hardly used by the majority of local residents. He spent time talking with locals to understand the issues with the parkland, which included a sense that the space was not for general recreation. Then, as part of a research project collaboration with Monash University’s architecture school, Masters students were asked to develop ways to address this challenge that could also help overcome community resistance to development.

One solution was to face a new development towards the park, instead of away from it, making it a more natural place for the residents to spend time. “The residents thought this was really good idea,” he says. “The architects did five or six different designs, and locals went from being opposed, to deciding they were all good ideas for the area. 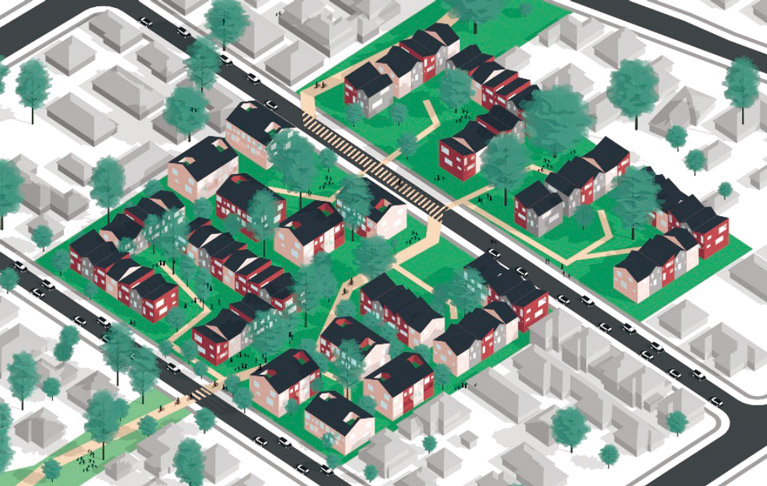 Above: The Greening the Greyfields project supports developments that are mid-rise and maximises land use for livability.

The incentives for developers are still under negotiation, but could include allowing for taller buildings — which could increase profits for developers — parking concessions, and faster preapprovals.

Frantzeskaki argues that a combination of rapid local urbanisation, and a changing global landscape, means that Australia’s urban sustainability experts will need to be both pragmatic and innovative: “We need to be more open to leap-frog, not to replicate the mistakes of other cities, and to rely on Australian innovation.”

Glackin agrees that pragmatism is vital. “It’s about getting it out of academia into something that follows a sort of business plan or set of steps that people can follow clearly.”

Swinburne researchers aren’t rushing in, he adds, pointing out that the Greening the Greyfield project first got off the ground in 2010. Nonetheless, he says the Centre for Urban Transitions is now preparing to have a bigger impact on Australian cities. “We have our playbooks, we have our design guides, we have our feasibility tools, and people are starting to get in touch, because we have something tangible.