Analysis for The Conversation by Dr James C. Murphy, Swinburne University of Technology.

As Australia’s longest serving prime minister, the career of Robert Menzies remains a model of political success in this country.

Despite this, much of Menzies’s legacy has failed to live long past his time in office, let alone into the 21st century. He was, for instance, firmly in favour of White Australia, obsessed with Australia’s British roots and idolised the monarchy. He also believed the Communist Party ought to be outlawed, and oversaw a highly protected, regulated economy. In many ways, Menzies was the last bastion of an old Australia we would hardly recognise today.

However, there are two notable exceptions – ways in which Menzies did manage to transform Australian political debate in a lasting way: firstly, through his construction of a middle-class political constituency he called “the forgotten people”; secondly, as the founder of the Liberal Party and Coalition. 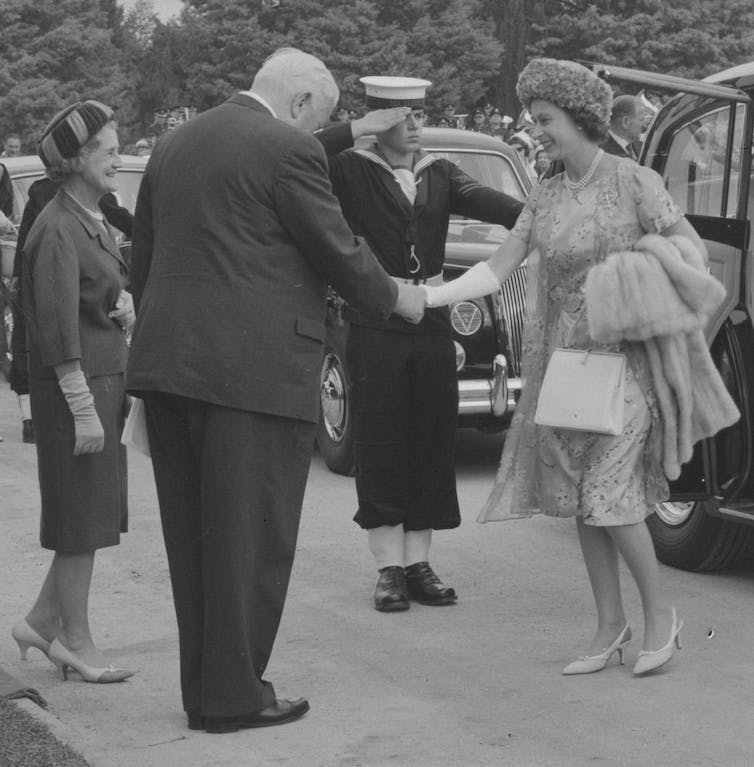 Menzies was a staunch supporter of the British Commonwealth, holding the monarchy in high regard. Wikimedia Commons

Rising through the ranks

Born in Jeparit, Victoria, in 1894, Menzies rapidly made his way into the elite of Melbourne society. After working as a barrister and later a youthful minister in two Victorian state governments, he was elected to the federal parliament with the United Australia Party in 1934.

Attorney-General Menzies then became prime minister after Joseph Lyons died in office in 1939, just as the second world war broke out.

His factional enemies in the UAP were not impressed by his wartime leadership and, after his closest allies were killed in a plane crash, Menzies was forced out of the leadership in 1941.

Within a year, Labor was in government, and the UAP was collapsing.

This was not the end of Menzies, though. In 1944, he led efforts to reunite various right-of-centre groups to form a new anti-Labor party — the Liberal Party of Australia. He then headed the party’s campaigns against the Labor government’s alleged “socialist” excesses, such as bank nationalisation and petrol rationing.

In 1949, he led the Liberals to a sweeping election victory. Though he had some electoral near misses, and part of his longevity was owed to a fortuitous split in the Labor party, Menzies remained Liberal leader and prime minister until his retirement in 1966.

In 1942, as he sought to resurrect his political career, Menzies gave one of Australia’s most famous political speeches, which envisaged a constituency he called “the forgotten people”:

But if we are to talk of classes, then the time has come to say something of the forgotten class - the middle class - those people who are constantly in danger of being ground between the upper and the nether millstones of the false class war; the middle class who, properly regarded, represent the backbone of this country.

These were middle-class, god-fearing citizens, neither rich enough to fend for themselves, nor poor enough to seek trade union representation, and thus lacking power. They would become Menzies’ core constituency, with the party tailoring its policies to helping them meet their modest aspirations for themselves and their families.

Where the UAP had been seen as tied to the upper class and big business, Menzies would seek to attach his party to this ignored middle class, a group more Australians could imagine themselves to be part of, even if they had never thought of themselves in those terms before.

This construct has remained at the centre of Liberal Party rhetoric, reincarnated as John Howard’s “battlers” and Scott Morrison’s “quiet Australians”.

Even Labor has, at times, sought to defer to this supposed “backbone of the nation”. In his first speech to the Press Club as Labor Leader, Anthony Albanese suggested the ALP had lost the 2019 federal election because, to many voters, it failed to be the party of aspiration; essentially, that they neglected Menzies’s forgotten people.

Of course, this is not to say there really is a quiet, unassuming, aspirational majority lurking out in the suburbs. Rather, Menzies’s forgotten people are a rhetorical construct that has grown a life of its own. Politicians believe in this constituency and defer to it, even if it is not, actually, a meaningful voting bloc.

Menzies was also the driving force in creating and holding together the Liberal Party — and indeed the long-term Liberal-National Coalition, an alliance that has historically shifted the focus of political debate.

Keeping liberals, conservatives and rural interests in one bloc has meant the battle for leadership in Australia became a contest between the Coalition and Labor. This was no easy feat. Indeed, until 1944, there had been numerous minor parties campaigning on the right of the political spectrum. Some were reluctant to join Menzies’s new party, given that it would be a “liberal”, rather than “conservative” party.

Free-traders and economic moderates frequently fell out over welfare and tarrifs; hard-line conservatives and social liberals had serious disagreements over censorship, multiculturalism and other social issues. However, Menzies managed to unite them under what Howard would later call the Liberal Party’s “broad church” by focusing on Labor’s “socialism” and the international threat of communism. This appeal similarly kept the Nationals as Coalition partners. Menzies said:

Consequently, the issues, problems and demands that divided the Coalition have not been fully discussed in the public arena, but rather suppressed within party room debates and compromises. This has, to an extent, enabled non-Labor alliances to dominate politics. More recently, the two-party system has begun to break down, with more and more voters availing themselves of minor parties and independents in order to place previously ignored issues on the political agenda.

Menzies’s legacy, then, is not so much his particular beliefs or policies, nor in the model of leadership he provides as Australia’s longest serving prime minister. Rather, his lasting contributions were the rhetorical and organisational structures he built. While the former have faded into obscurity, the notion of “the forgotten people” and the Liberal-National Coalition remain as important now as they were when Menzies retired from office in 1966.

Had he retired from public life at his low ebb in 1942, Australian politics might look very different today.