More than half of Australians over the age of 55 are open to downsizing, according to a new report based on a survey of 2,400 households. The main barrier to moving to a smaller home is a lack of housing that matches their needs and preferences. The rapid growth in the number of older Australians adds to the major challenge housing markets face in meeting their diverse housing needs.

Downsizing, or rightsizing, is considered an essential component of meeting the housing aspirations of older Australians. At the same time, downsizing creates housing opportunities for younger households by freeing up family homes.

The ageing population also creates fiscal challenges for government, in terms of delivering services to the home and providing residential care. Downsizing can enable older Australians to age well and age in place rather than potentially move prematurely into residential care.

The report released today by the Australian Housing and Urban Research Institute (AHURI), for which 2,400 households over 55 were surveyed, found 26% of such households had downsized. Another third had thought about it. Overall, the findings point to a strong appetite among older Australians to downsize their dwellings.

Why downsize? And what are the obstacles?

We know older Australians downsize in response to life events such as changes in health and relationship status, or children leaving the parental home. Lifestyle preferences and difficulties maintaining their garden or house also shape downsizing behaviour.

Barriers to downsizing include a lack of suitable housing and a lack of financial incentives. There are also emotional and physical barriers to moving. Financial factors, however, do not greatly impact the decision to move, nor does perceived financial well-being increase once they have downsized.

Where those who had downsized were dissatisfied, this was most commonly related to the new dwelling, particularly its size, and the neighbourhood.

Is it actually downsizing?

One of the policy rationales for downsizing is to reduce the underutilisation of dwellings. However, this is at odds with the attitude of many older Australians. They consider “spare” bedrooms necessary for use as permanent guest rooms (58%), studies (50%), or dedicated rooms for children or grandchildren (31%).

Space remains important to Australian downsizers. Over half of them move to a dwelling with three or more bedrooms. A third move to an apartment.

However, two-thirds of downsizers surveyed did move to a dwelling with fewer bedrooms. Three bedrooms was the preferred dwelling size for older Australians. Downsizing the garden was essential for most.

Downsizers appear mobile. While under a quarter downsized within their original neighbourhood, 42% moved to a neighbourhood completely new to them.

The survey finding of a lack of suitable housing options matching would-be downsizers’ preferences may explain why so few were able to downsize in their original neighbourhood.

If the local market does not have enough options available to meet the needs of older households, it is very difficult to downsize within an existing community. Moving to another desired location can also be problematic.

Meeting the needs of older Australians generally means an increase in medium-density housing. Developers are likely to require incentives to produce these medium-density products rather than potentially more profitable high-density development – although there is, of course, a downsizing market for well-located apartments. 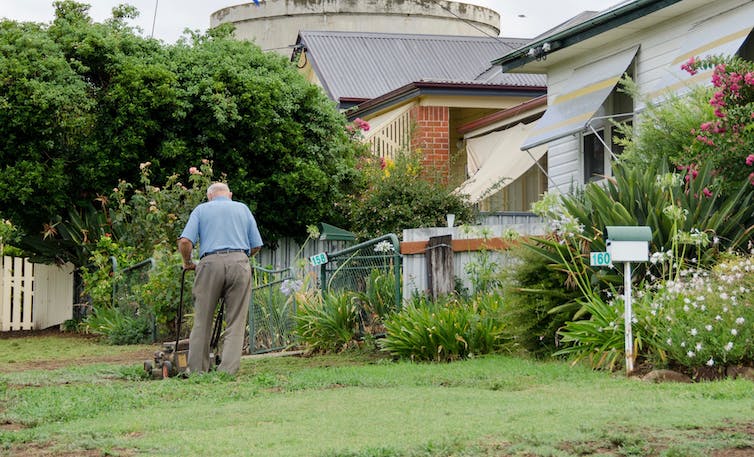 The retirement industry has begun responding to the aspirations of older Australians. It is developing larger dwellings and offering a growing range of options, from high-end to affordable — all of which are accessible and suitable for ageing in place.

Equity-rich older Australians may wish to build a new dwelling in which to downsize. But they are often unable to borrow for this unless they have considerable capital available.

To support this avenue, new development finance models could be created to allow older Australians to develop without first having to sell the primary home. This shift would allow more collaborative forms of development, such as a group of like-minded individuals developing a site as housing for a small community.

For those vulnerable private renters moving into retirement, more secure rental accommodation through the social housing sector and delivered privately is essential. The community housing sector has a key role to play.

The Australian housing landscape must shift towards a model of dwelling diversity with secure tenures – ownership and rental – in neighbourhoods where residents can walk easily to weekly services and recreation facilities, participate socially and be close to public transport options.

Such a landscape will provide effective downsizing options in which households can age well in the places that best meet their needs and aspirations.