What has the search for extraterrestrial life actually yielded and how does it work? – Rose, age 13.

I am lucky enough to be a professional “alien hunter” for the Breakthrough Listen project, which is the biggest search for extraterrestrial intelligence we humans have ever undertaken.

My role in the search is to use data from the Parkes radio telescope in Australia to look for signals from space that might have been be sent by intelligent extraterrestrial life.

The Breakthrough Listen program has been going for three years, and we have another seven years of searching to go. But people have been searching the skies for signs of intelligent life since the 1960s and to date we have found… zero aliens.

But don’t lose hope! The Universe is mind-bogglingly large, and with the latest technology, the search is only just starting to heat up.

There are three exciting ways we might detect life beyond Earth in the coming years.

Probes to planets and moons

You may have heard about the NASA missions to Mars – the latest is the Curiosity Rover, and it has special equipment that might detect simple life like microbes on the red planet’s surface. 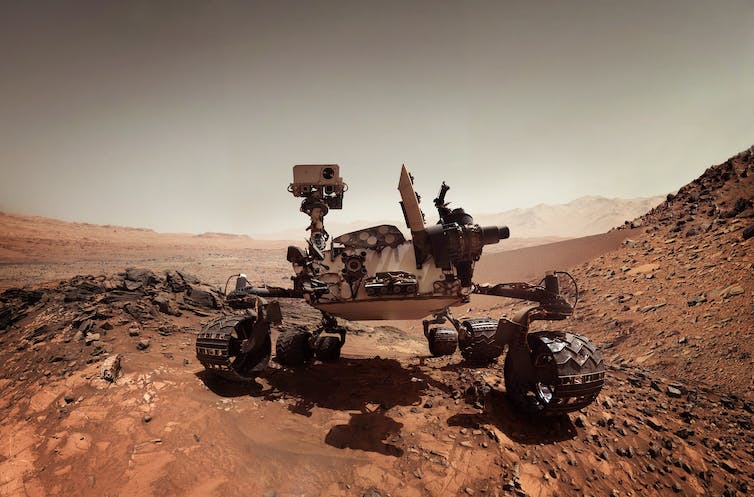 NASA has sent the Curiosity Rover to Mars to investigate the planet’s surface. Shutterstock

Curiosity recently uncovered an intriguing mystery: occasionally its sensors pick up methane gas in the atmosphere. Methane is produced here on Earth by animals (in particular, cows and sheep), so finding methane could point to there being some microbes in the soil.

That would be an amazing discovery, but it could still be something less interesting, like a chemical reaction between rocks. Another upcoming mission is called Dragonfly, which will venture to Saturn’s moon Titan (which, amazingly, has an atmosphere) and will fly around looking for signs of life.

NASA says its Dragonfly drone will fly around Saturn’s moon Titan looking for signs of life.

Studying the atmospheres of other star systems

The second way we might detect life is by looking closely at the atmospheres of planets in other star systems, which are called exoplanets.

Astronomers have detected lots of exoplanets, and recently found water in the atmosphere of one exoplanet, but we still can’t tell if there is life on the surface.

Excitingly, the next generation of optical telescopes will be able to detect gases in the atmospheres of nearby exoplanets. If we see that an exoplanet’s atmosphere has a mix of gases like Earth, that would be strong evidence that we are sharing the galaxy with other beings.

The search for extraterrestrial intelligence or ‘SETI’

The search for extraterrestrial intelligence, or “SETI” as it is known, is the third way scientists are looking for life. In SETI, we look for signals from space that look artificial or that don’t seem natural. Detecting an artificial signal would tell us that there was not only life, but life capable of producing advanced technology.

SETI could detect an artificial signal from much, much further away than the other two methods; the disadvantage is that intelligent life is almost certainly rarer. We just don’t know yet how rare, and that’s the reason we need to look.

The best explanation for why we haven’t found life beyond Earth yet is simply that we haven’t been looking hard and long enough, and our technology has not advanced enough. There are hundreds of billions of stars in the Milky Way alone, and there are more stars in the Universe than there are grains of sand here on Earth.

As SETI pioneer Jill Tarter is fond of saying:

You wouldn’t dip a glass in the ocean, come up with no fish inside and conclude, ‘No fish exist’.

The tide pools and coral reefs of the Universe may be filled with life, we just need to keep dipping our glasses into the darkness.

Hello, curious kids! Have you got a question you’d like an expert to answer? Ask an adult to send your question to curiouskids@theconversation.edu.au

By Dr Danny C Price, Astrophysicist, Swinburne University of Technology. This article is republished from The Conversation under a Creative Commons license. Read the original article.