In a multicultural country like Australia, it’s easy for migrants to keep their heritage culture alive. But our recent research that surveyed more than 300 migrants found those who adapt to Australian society, called “Australian acculturation”, have greater personal well-being than those who don’t.

Read more: How do we measure well-being?

We measured personal well-being using the Australian Unity Personal Well-being Index (PWI), which measures the level of a person’s satisfaction using a points system from 0 to 100. 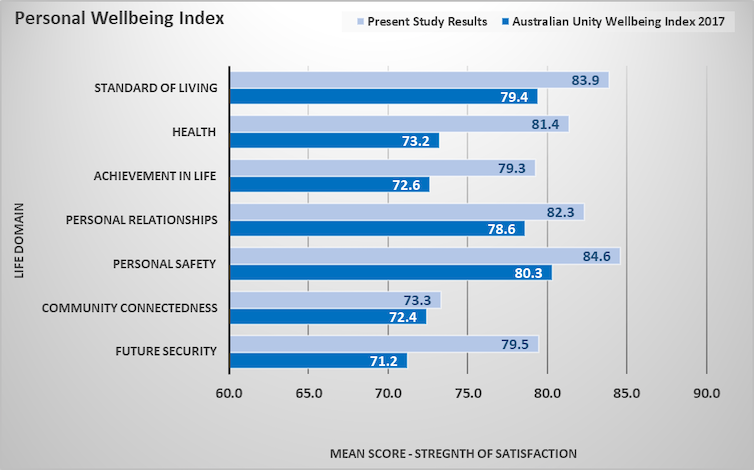 A chart from our study comparing the well-being of our sample of skilled migrants with the general population of Australia.

Given the present study involved skilled migrants, it’s possible that their higher education, skills and salaries may have contributed to higher levels of personal well-being, compared to the Australian population as a whole.

Read more: Migrants are healthier than the average Australian, so they can't be a burden on the health system

Community connectedness may be lower because:

Rather than acculturation, some skilled migrants will maintain their own culture, and add layers of cultural practices from their host country. For them, “biculturalism” – or being able to switch between host and heritage cultures – is more realistic.

Read more: Settling migrants in regional areas will need more than a visa to succeed

For example, an Indian family who moved to Melbourne will keep their culture alive through food, language and friendship circles, but might also go to the footy and support an AFL team.

Full acculturation, on the other hand, is when migrants abandon their heritage cultural practices and values when they adapt to the host culture.

For a first generation non-Western migrant, adapting to the Australian culture is even harder. Research has shown that acculturation into a Western country is unlikely for these people.

This is for a number of reasons, such as pride in their heritage culture, maintaining strong connections with relatives and friends, and the societies they move to allow them to maintain heritage cultural practices through multicultural policies.

Most people migrate when they’re young, so they’re able to contribute to the socioeconomic well-being of the host country by bringing in much needed skills, knowledge, technology and investment to Australia.

But in any case, migrants grow old in a culture that’s not heritage to them, so Australian acculturation is important to help combat social isolation in their old age.

In fact, a 2015 study found older people from culturally and linguistically diverse backgrounds are at a greater risk of depression than Anglo-Australians.

So if our skilled migrant sample, with the average age of 38, are low-scoring in the “community connectedness” domain, they could fall into a social isolation trap as they age.

By Asanka Gunasekara, Lecturer in Management, Swinburne University of Technology. This article is republished from The Conversation under a Creative Commons license. Read the original article.