As the ash settles upon the smouldering crenels of King’s Landing and a new ruler ascends to the throne, Game of Thrones fans around the world ask … what now?

For eight years, the sprawling epic of this HBO series has unfurled before our eyes. The show’s cultural relevance, its record-breaking global viewership, and the ways it captures the collective imagination are clear. Events in Australian federal politics have been compared to a Game of Thrones script. Even the sitting US President, for good or ill, communicates via GoT memes.

But beyond the final episode, which aired Monday, there is another world to explore. Thousands of fans have transformed the series into something else, creating a multimedia, participatory phenomenon that will endure.

Through memes, tweets, GIFs, videos, blogs, fan-fiction and commentary, shared via social media, these “transmedia” fans have formed communities that analyse and extend the show’s narrative. Pastiches that mash-up GoT with other popular culture references, such as Game of Thrones - 1995 Style, are just one example of the creative material fans produce.

Our research initially looked at online fan reactions to the episode adapting the “Red Wedding”, a bloody plot point from George RR Martin’s A Song of Ice and Fire novels. We are now exploring the community #FakeWesteros, which has existed on Twitter since the show’s inception.

In this community, fans live-tweet/role-play GoT episodes in character. Tweets (usually tongue-in-cheek), are spoken from the perspective of the character, and often include animated GIFs or memes sharing reactions to events. #FakeWesteros has a large following – the account @NiceQueenCersei alone currently has 58,000 followers. 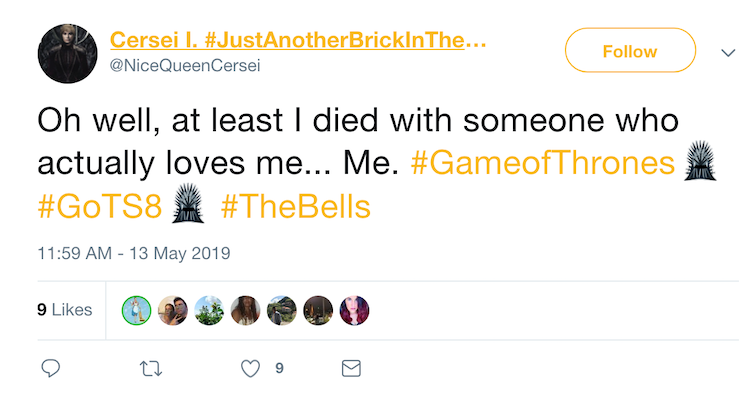 On the blogging and social network site Tumblr, meanwhile, fans have shared memes throughout the series’ run, while GIPHY (an online database of short animated clips known as GIFS) has approximately 1,200 GIFs under HBO’s verified @gameofthrones account. Many more user-created GIFs are tagged as #gameofthrones. 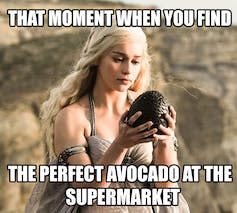 Thousands of hours of commentary have been recorded by fans in podcasts, discussing everything from who will finally ascend the Iron Throne to whether Tormund and Brienne will find love together (sorry Tormund!). Similar conversations are found on discussion site Reddit, where fan communities have debated everything, including whether the unlikeliest character might have been the prophesied Azhor Ahai (sorry Tyrion!).

YouTube is home to more fan-made content, including parodies like The Night King’s “(Arya) I Just Died in Your Arms Tonight”. Fans have also expressed their feelings about the show by filming and uploading “reaction videos”, recording their real time responses to the series’ most gut-wrenching moments.

And now, we face the end.

It is easy to forget that Game of Thrones is an adaptation of Martin’s novels and his series is incomplete. There is more story to tell beyond the end of the TV show. Martin has confirmed that he is writing another book, but given his track record (the most recent one was published in 2011), fans probably shouldn’t hold their breath.

HBO has confirmed at least one spin-off series, reportedly a prequel, is in the works. Even so, some fans are unwilling to let go: in reaction to the rushed storytelling of the final season, some have launched a petition (with more than one million signatures) to remake the last six episodes.

Meanwhile, others are already writing their own endings. Fans’ creations over the last eight years represent a massive amount of content. Currently, there are 927 GoT stories on FanFiction.net and 31,284 on fan fiction site Archive of Our Own.

One example re-writes “The Bells” (the penultimate episode in series eight) by imagining that Daenerys Targaryen controls her worst impulses and does not lay waste to King’s Landing – an outcome that would surely have altered the conclusion of the series.

Although the future may seem murky for GoT transmedia fandom, the fans themselves have no doubts. While their HBO namesakes are no more, two members of the #FakeWesteros community @iMissandei and @IronbornTheon made it clear this week that they remain devoted to the community and fandom.

As “IronbornTheon” put it, “I have realised that just because the show is going off the air, doesn’t mean the community is going anywhere.” 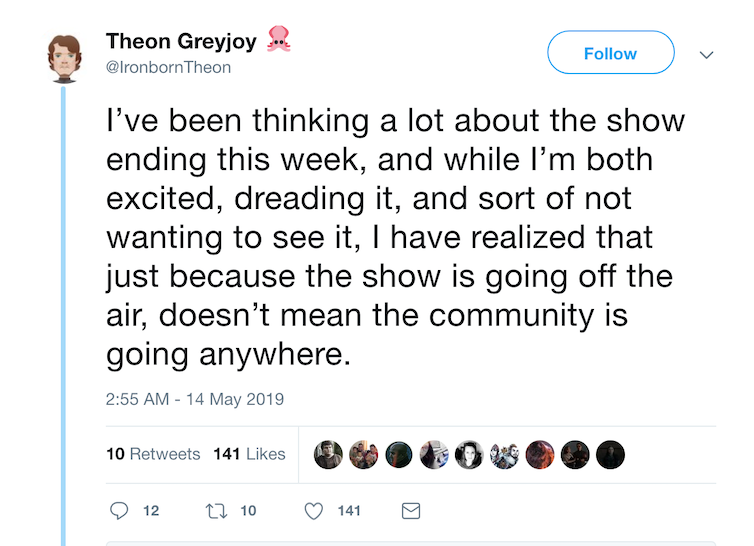 We look forward, then, to the next chapter of this story.