It’s often said that no matter who we are, “we all bleed red”. But although our blood may be the same colour, we’re as individual on the inside as we are on the surface. Just like our background determines the way we look, where we come from is one of the major factors that influences the make up of our blood.

About half of people living in Australia today were either born overseas, or have a parent born overseas. This increase in the diversity of our population leads to a corresponding diversity in the people who need medical treatment – and their blood types.

We need a broad mix of ethnicities in our donor pool to meet the needs of patients with rare blood types. Providing the right blood and blood products for an ethnically diverse population presents an evolving challenge for blood collection agencies around the world, including here in Australia.

Read more: Blood groups beyond A, B and O: what are they and do they matter?

People from diverse backgrounds tend to be underrepresented in donor populations. While Australians born overseas account for roughly one-third of the population, they account for only one in five blood donors.

This limited diversity in our pool of donors creates challenges in identifying blood matches for transfusion to patients with rare blood types.

The link between your blood group and where you come from

Blood types consist not only of the commonly recognised groups such as A, B and O, but also include more than 300 other variants. Each of these variants is a marker on the surface of our red blood cells, and is known as an “antigen”.

Our blood type is inherited from our parents. Like other inherited characteristics such as skin and hair colour, the frequency of blood types in a population shift in response to stresses in the environment (known as “selection pressure”).

For example, in parts of the world where malaria thrives, the proportion of the population with various blood types has altered over time to make people less prone to infection.

So this effect has more to do with where you and your ancestors lived than your ethnic group. One blood type, known as Duffy null, is much more frequent in Africans in Africa than in African-Americans, possibly because African Americans are no longer exposed to the malaria parasite.

In short, one reason we have different blood groups is to improve our chances of fighting disease.

Most transfusions of red cells are matched for the commonly recognised ABO and Rh blood groups (the Rh group is the one that gives you the “positive” or “negative” in your blood type).

If someone receives a transfusion of blood that doesn’t match their own type, their body may recognise the transfused blood as foreign, and develop antibodies to try and destroy the “invader”. Their body will keep making these antibodies, which can then interfere with future transfusions. 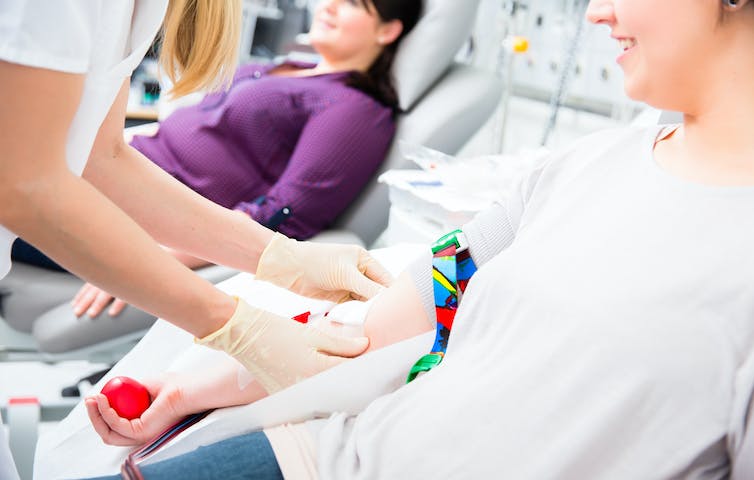 Most healthy people are eligible to donate blood.

Some patients need specially matched red cells for transfusion. This means on top of being matched by ABO and Rh type, the donor’s blood is matched to make sure it doesn’t contain blood group variants that aren’t present in the recipient’s blood. This is more difficult to achieve.

There are three groups of patients who need specially matched blood:

Patients who may need to have multiple transfusions throughout their life include those with disorders affecting the blood such as sickle cell anaemia, thalassemia major and myelodysplasia.

Which groups are most in need in Australia at the moment?

There are so many different blood group antigens, combinations of even the most common blood group types are found in only a small proportion of donors, making it difficult to provide blood fully matched for a particular patient.

In addition, as our patient population becomes more diverse, there is a greater need for blood types that are rare in a Caucasian population.

Blood centres in many countries have introduced a variety of campaigns to attract a broader donor group.

At the Red Cross Blood Service in Australia, we are interviewing donors from diverse backgrounds to learn more about their experiences in donating blood. Our goal is to build a donor panel that represents the diversity of the broader Australian community.

The benefits are not only for the patients and the health system – research suggests participating in blood donation facilitates social inclusion among migrant communities.