People experience philanthropy in Australia in a variety of ways, often without even realising it. It might be a new hospital wing that was constructed using funds from a generous donor, or an art exhibition made possible through the support of a group of philanthropic foundations.

Philanthropy played a key role supporting the Yes campaign in the 2017 marriage equality vote, and right now it’s funding advocacy to lift the rate of Newstart.

From time to time we hear about big pledges in the news. This week, for example, we learned that a pledge by Clive Palmer made in 2008 to donate A$100 million to Indigenous communities has turned out to be an empty one.

But philanthropy can still be surrounded by an aura of mystery. Here’s a picture of what it looks like in Australia, and why we have an opportunity to improve our giving culture.

How much do we give?

Total giving to Australian charities in 2016 was A$10.5 billion, according to data from the Australian Charities and Not-for-profits Commission. Most of that is on the smaller end of the scale. The bulk comes from monthly donations people make to a favourite charity, or one-off donations in response to a Christmas or disaster appeal.

About A$1.5 billion is what’s called “structured philanthropy”. This is philanthropy at the larger end of the scale, which tends to be planned and strategic, and generally involves using some sort of dedicated legal structure to facilitate it, such as a philanthropic foundation.

Some individuals, families or businesses decide to establish a separate legal structure for a variety of reasons. For large-scale giving, they may wish to build a solid governance structure around it in order to enhance its effectiveness. They may want to involve their children more closely in the management of their giving. Or they may also want to build a legacy that can continue to contribute to the community after their death.

So, when it comes to deciding what kind of structure to use, what are the options available in Australia?

One option is what’s called the “private ancillary fund” (PAF). A PAF enables a donor to put aside an amount of money in a trust to support charities over the long term. Donations into the PAF are tax deductible, and are invested to generate a return over time. Every year, 5% of the PAF’s assets must be distributed as grants to what are called “Item 1 deductible gift recipients”.

Since their introduction in 2001, PAFs have grown relatively steadily. There are around 1,650 of them, according to data from the Australian Taxation Office (ATO). Together they hold upwards of A$8 billion in assets, and distribute more than A$450 million in grants per year.

One alternative to a PAF is to establish what is commonly referred to as a “sub-fund”. They can be thought of as a form of “giving account” that sits within a larger public foundation. There are a range of providers with whom a donor can establish a sub-fund. These include community foundations, wealth managers and trustee companies.

Until recently, there has been no data on sub-funds in Australia, but my recent research at Swinburne University found there were at least 1,995 sub-funds in Australia. They hold A$1 billion in assets, and distributed nearly A$57 million in 2017-18 via some 6,000 grants. There are indications that sub-funds are growing strongly, and the next iteration of this research in 2020 will provide more conclusive data on this.

There is also the option to establish a charitable trust. These are different from PAFs or sub-funds because you don’t get a tax deduction for any donations you make into them. But you can generally structure them to give to a much wider range of charities and other organisations.

According to one estimate, there were 2,005 charitable trusts in 2016. They held assets of A$7.7 billion, and distributed A$507 million in grants. Many charitable trusts are set up through people’s wills, and only come into existence when a person dies. Because we don’t have estate taxes in Australia, the lack of a tax deduction isn’t a problem.

Could we give more?

There are some worrying trends in terms of our giving behaviour based on the latest data from the ATO. The proportion of taxpayers who claim a deduction for donating is in decline, although the average amount claimed is increasing. At the same time, 44% of taxpayers with a taxable income above A$1 million did not claim a single deduction for a donation to a “deductible gift recipient”. 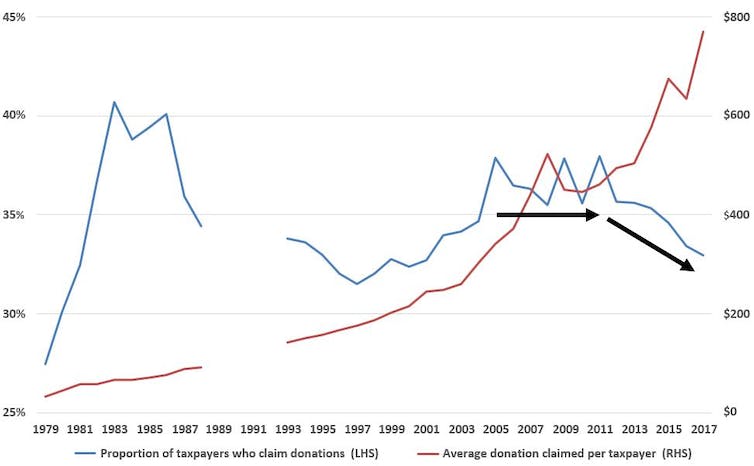 Australia is about to witness the largest intergenerational wealth transfer in our history, with estimates that in the next two decades A$2.4 trillion will pass from “baby boomers” to the next generation. But giving through bequests made in wills is currently low.

One study estimated that in 2012, only 7.6% of wills had a charitable bequest, and they accounted for only 2.7% of the total value of estates. So, although Australians should be proud of the giving we do, there is clearly room for improvement. We really should have tens of thousands of PAFs, sub-funds and charitable trusts in Australia, not just a few thousand.

What will ultimately drive the growth of giving, both large and small, is the culture of giving we foster in Australia. Part of the solution, particularly at the larger end of the scale, is to ensure we have the right incentives and structures in place to encourage it. But we also need to look at other ways to inspire more giving – growing our culture of giving is not something you can do overnight.

Written by Krystian Seibert, Industry Fellow, Centre for Social Impact, Swinburne University of Technology. This article is republished from The Conversation under a Creative Commons license. Read the original article.