When the New England Patriots face the Los Angeles Rams in the Super Bowl on Sunday night (US eastern time), they will be cheered on by about 75,000 fans in the stadium, more than 100 million television viewers across the United States, and an estimated 50 million more around the world.

An increasing number of Australians will be tuning into the United States’ biggest annual sporting event, too.

Why many will be taking time off work on Monday morning to watch tells us a lot about what is happening to sport in the 21st century, as a commoditised product in a globalised media entertainment complex.

That American football is even popular with Americans can often be a mystery to foreigners. It’s easy, for instance, for a diehard Australian Football League fan to dismiss it as helmeted hoopla.

Take game time. In the typical Aussie Rules game, lasting about 2.5 hours, there is about 80 minutes of play. The typical NFL game, by comparison, takes three hours but has less than 12 minutes of actual play.

What fills the time? For one thing, advertising. During this year’s Super Bowl you can expect to watch about 50 minutes of pure commercial breaks, with 30-second slots costing advertisers more than US$5 million.

So what makes American football increasingly attractive to people who have grown up playing and watching Aussie Rules, Rugby League, Rugby Union or the world game? Why is the number of Australians tuning into the Super Bowl expected to exceed the 390,000 who watched last year?

Some will simply enjoy the Super Bowl as a spectacular event. For others it is part of increasing engagement with both the NFL and other overseas sports.

A huge range of sports are being marketed to Australians through both global and local media channels.

Successfully marketing a “culturally alien” sport to a new audience is not simple. The division in Australia between the Aussie Rules and Rugby League states shows that carving out a niche can be a long and hard process. Nonetheless there are some critical characteristics for success.

Second, the sport “content” needs to be accessible, and leverage a range of connection points to engage media audiences, and socialise or connect networks of fans. Much of sports’ value is about sharing experiences with friends, colleagues and family. So high-profile, accessible and entertaining content is a valuable marketing tool.

The NFL scores high on both. 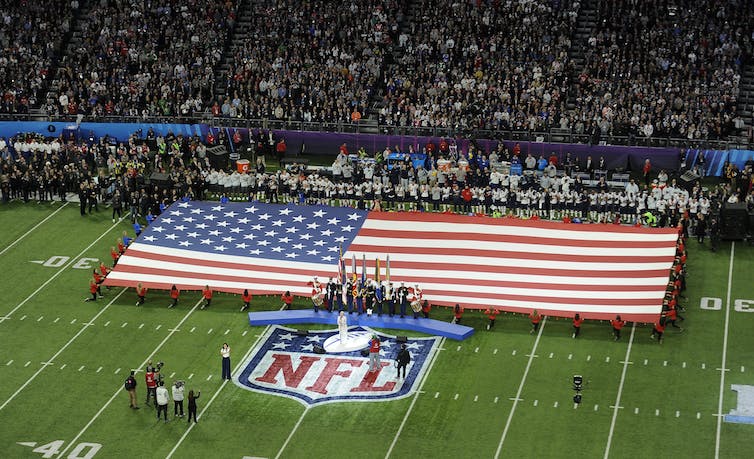 Most Australians know the game due to the familiarity of American culture through films and television. And now the NFL is widely broadcast in Australia. You can watch live games and replay packages on television channels, on the NFL’s own streaming platform or on social media and e-commerce sites.

The content is virtually 24/7, with the NFL at the top of the mega-sport league in supplying round-the-clock content.

This starts with live games themselves. The NFL first grasped the ratings logic of spreading out games for prime-time television audiences in the 1960s. The modern-day outcome is that an Australian fan can watch games from Friday to Tuesday from September through January.

Then there’s the highlights repackaging. Though there’s less than 15 minutes of actual action during an NFL game, that time is made up of 55-70 plays per team, each lasting an average of four seconds. What happens in a four-second play, however, can be dissected and analysed for far longer.

It might involve profiling the speed, power or athleticism of a particular player. Or doing a detailed breakdown of both the offensive strategy and the defensive response. There is also a growing market for analytics and statistics, given the growth of sports betting.

On all these fronts the NFL provides “engagement points”.

Acute levels of analysis fuel other content. Included here are panel shows, podcasts, reality shows and documentaries that profile and build awareness of athletes and teams from high school to professional levels. Much of this content is now available in Australia.

In short, the NFL leverages high visibility and a well-developed content strategy to engage fans in a variety of ways on and beyond game days; and it has more money to do it better than anyone else.

So should Australia’s existing sporting businesses be concerned about NFL?

For our most popular codes, like Aussie Rules and Rugby League, that answer is no.

Indeed, any sport that is already popular enough to have coverage on free-to-air television is unlikely to see interest in NFL impact its ratings or bottom line.

But for the sports at a lower level of popularity and revenue, without considerable free-to-air coverage or a strong digital footprint, the NFL juggernaut definitely presents a threat.

Of course, it is quite common for sports fans to follow different sports, including local and global leagues. But even the most dedicated sports fans have finite time, and so must prioritise their preferences.

In the British market the NFL has outlined a explicit strategic goal to be a second, third or fourth preference option among sports fans. To this extent, as consumers prioritise the watching and following of new (global) sports, this pushes other sports down the preference list, impacting their popularity and revenue potential.

In Australia, a much smaller market where the top end of the sports preference list is already crowded, that potentially makes the NFL a real game-changer.

Written by Adam Karg, Senior research fellow, Swinburne University of Technology. This article is republished from The Conversation under a Creative Commons license. Read the original article.