Playable cities connect people and place in creative ways. They appropriate urban environments and infrastructure and provide ways for citizens to participate in smart cities. While people may be aware of smart cities, these are perceived to be more about technology and corporate interests, rather than about people.

Play invites participation. And the playable city invites you to become part of the experience, part of the artwork. It shifts the boundary of where an artwork begins and ends in relation to our urban environment.

The 2018 Melbourne Art Trams program connects people with art, with trams first being painted in creative ways in 1978. But, for the first time, one tram makes art “playable”. 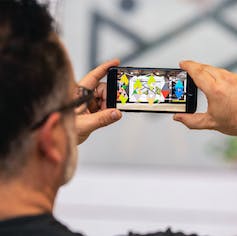 My 32.5-metre tram artwork plays a musical score via augmented reality. It takes something that is functional and everyday and turns it into a playable public artwork.

Public art is often decorative, but should also be provocative – challenging our perception and understanding of public space. Central to the playable city concept is the role of art and play in transformation and defamiliarisation – so that we our world in a new light.

The playable city happens in conversation with people and places that make the city – it is a social framework. Conversation is what playable cities bring to smart cities, broadening our perspective and imagining of what our city could be.

Trams have been part of Melbourne life since 1889, with the first art trams rolling out onto the tracks in 1978. In 2013, this unique public art program returned after a 20-year hiatus as part of the Melbourne International Arts Festival. It’s widely recognised as a sign of Melbourne’s playful attitude to public space.

The 2018 festival team embraced the concept of a playable art tram by providing a C2-class tram on Route 96. At 32.5 metres, it’s Melbourne’s longest tram.

Viewed through a smartphone camera, the tram is roughly five times as wide as the screen. This allows it to be scanned as it moves – somewhat like a musical score being read by a pianola. The speed of the tram generates different musical compositions when it’s stationary, accelerating, at full speed, slowing to a stop and so on.

The particular ways in which trams move through urban spaces is the main inspiration for the work. Making it playable is a way to visualise and sonify that movement.


Troy Innocent talks about the playable city and his playable tram.

If a tram can be playable, then what other parts of the city could we play? While play in cities is not a new idea, in the past two decades we have seen a rise of creative technologies that present new opportunities for artists and designers working in public space.

In 2012, the Watershed Pervasive Media Studio recognised this trend and founded the Playable City project – reacting against the technological bias of smart cities at the time. Originating in Bristol, the international network now includes eight cities around the world.

Through a series of commissions – including talking lamp posts and street lights that mirror your shadows – a methodology has been developed that talks across urban planners, artists, technologists, designers, academics, local government, architects, creative producers and beyond. Since the project started, smart cities have become more diverse and have started to learn from the conversations that the Playable City started – particularly around citizen participation and co-creation.

Melbourne as a playable city

As the Art Tram program demonstrates, Melbourne has always been a playable city. Quentin Stevens’s 2007 book, The Ludic City, features the urban landscape of Melbourne as a public playground – before the smartphone arrived and transformed public space.

The city has a long history of independent and experimental game development. Having recently completed a Melbourne Knowledge Fellowship researching playable cities overseas, it is clear what the city has to offer to this conversation and we hope to establish an urban play community in Melbourne.

Play that can reshape cities

Games and play have become increasingly embedded in daily life over the past two decades – they have become pervasive. I’m interested in games and play that are situated in unfamiliar contexts and locations, that cross over disciplines, that get us thinking and seeing the world in new ways.

As games and play become something that is not only about entertainment but also challenge and re-imagine our ways of being in the world, we will experience a wider range of creative expression and possibilities. Play can literally create alternative realities for us that are not separate from the world but reshape the world we already live in. Playable cities connect people and create opportunities for people to participate in the processes that shape the cities they live in.

Try it for yourself: download the Accelerando app (here or here) and go play a tram!

Written by Troy Innocent, City of Melbourne Knowledge Fellow 2017-18, Senior Lecturer in Games and Interactivity, Swinburne University of Technology. This article is republished from The Conversation under a Creative Commons license. Read the original article.