On my daily commute from Brunswick to Hawthorn, I often look out the train window and ask myself, “Where has Melbourne’s political graffiti gone?” Growing up in Sydney in the 1970s, political graffiti was part of my everyday urban landscape. Organised groups like Billboards Utilising Graffiti Against Unhealthy Promotions (BUGA UP) systematically sprayed billboards advertising alcohol, tobacco or anything with sexist content.

Their statements were witty, satirical and clearly left wing: “BEER KEEPS WORKERS IN THEIR PLACE” was emblazoned on an advertisement for the now almost obsolete KB lager; “CANCER KNOWS NO CLASS” adorned a billboard for Benson and Hedges cigarettes.

Our family remembers with fondness the response to the declaration from another graffitist, “GOD HATES HOMOS”, at the corner of Missenden and Parramatta roads in Camperdown. “BUT DOES HE LIKE TABOULI?” someone sprayed back.

The walls of public and private buildings still provide a canvas for political voices but in Melbourne, where I now live, there is less of this overtly political graffiti and it is more ephemeral. What little remains is up against stiff competition from taggers (who could be read as making an oblique statement against draconian graffiti regulation).

The legacy of political graffiti lives on through stick-ups, short-lived slogans and officially sanctioned political content. Stick ups are rogue poster campaigns drawing on the artistic tradition of poster art born in Paris in the 1850s. They resemble collage by 1920s Dadaists, Russian Constructivist posters or 1960s Pop Art but are more politically charged.

In recent times, stick ups have spoken out against issues such as Islamophobia, racism, police violence, environmental destruction and domestic violence. Others target individual politicians, like Peter Dutton, who became the object of “FAKEWIT” posters from early 2017. There is something sweetly ironic about how much these posters resemble Andy Warhol’s screen print portrait of Mao Tse-Tung. 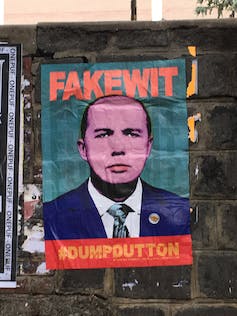 ‘Fakewit’ a poster of the #dumpdutton campaign, near Glenferrie Station. Author provided

Stick-ups are quick and easy to produce but as ephemeral as the promotional campaigns for concerts, bars and universities they compete with. Still, at least they are there.

Recently in Brunswick, graffiti advocating for Indigenous land rights and the slogan “MAKING BRUNSWICK WHITE AGAIN”, a comment about gentrification that played on the name of a real estate franchise, were gone in under 24 hours. Yet tags on the same wall were left there for weeks.

In another case I witnessed in Brunswick, an expression of protest sprayed on a mural of a woman’s face that covered the side of a chemist shop: “WOMEN ARE NOT ORNAMENTS”. These words were painted over in less than a week. Whoever covered them was apparently not bothered by the tags further along the street - they are still there.

In 2016, meanwhile, the graffiti artist Nost “capped” (ie sprayed graffiti over) a 30 year-old mural in Northcote painted by the artists Eve Glenn and Megan Evans, which celebrated local women. Feminists responded, in turn, by graffitiing over Nost’s work, writing “FUCK THE PATRIARCHY” and “NOST IS A DICKHEAD [LOVE] THE LADIES.

Nost was later charged with a range of offences including criminal damage, burglary, trespass, and theft and remanded in custody. However, while the feminist protests were quickly painted over, Nost’s tag remained on the Northcote mural.

The 21st Century landscape of graffiti

The everyday urban landscape of 21st century Melbourne has been largely taken over by tags and non-political graffiti. Overt political graffiti is quickly erased, while officially sanctioned pieces or work with little or no political content is celebrated.

One example is that of graffiti production houses like Everfresh Studios. Members of the Everfresh crew do a wide range of interesting (and sometimes politically engaged) work but their Instagram feed also depicts the kinds of idealised women with parted lips typical of the advertising that BUGA UP used to protest about.

Other wall space is taken up by the work of graffiti artists for hire who create corporate graffiti to promote brands and businesses. In the case of Fitzroy, graffiti "brands” much of the suburb as in the “Welcome to Sunny Fitzroy” piece that covers the entire side wall of the iconic Night Cat club on Johnston Street. The brand of the suburb and the brand of the graffiti artists merge into one and the same image. 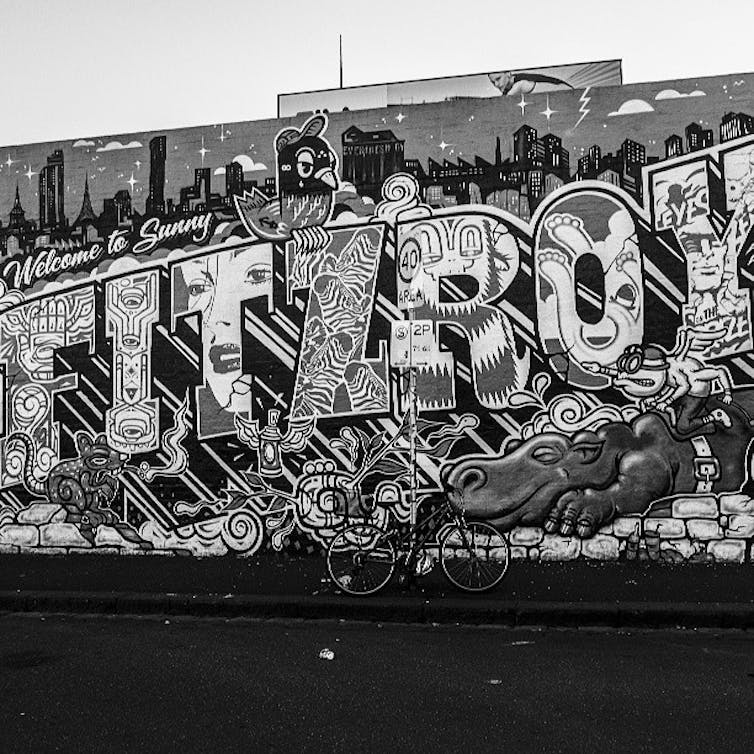 Graffiti is a paradox. Often criminalised with heavy penalties, it is also part and parcel of the hype of corporate promotional campaigns or as an urban stage set for wedding photos. All this leaves less space and visibility for spontaneous political expression and begs the question: has political conversation moved online?

Elsewhere in the world, politics has played out on the walls of Rome (in ancient, Fascist, and modern times), Israel, Egypt and other northern African and Middle Eastern nations during the Arab Spring.

Ironic or perverse as it may seem, the lack of political content in most of Melbourne’s graffiti means it adds up to a singular branding exercise. The city and its cultural image meld together - an image that appeals to those who like their culture free of politics.

Written by Flavia Marcello, Associate Professor of Design History, Swinburne University of Technology. This article was originally published on The Conversation. Read the original article.