Science is in Canberra this week, and yet we have no minister for science.

No science minister, on a background of Australia’s complex recent history of affiliating the science portfolio with a range of other ministries.

One interpretation is that successive federal governments struggle to see where science fits in our nation’s operations and future. Perhaps it remains unclear for politicians to see how best to link science with other activities, how to fund it, and how to successfully harness science for economic and other benefits.

Read more: Science Meets Parliament doesn't let the rest of us off the hook

We have a big-picture Science Statement, which is admirable, and roadmaps and reviews that have provided insights and ways forward. But we don’t have a coordinated, cross-portfolio investment plan - a plan to invest in the ultimate renewable resource.

Johnston said any such plan needs to be long-term, and to encompass education, research, translation and innovation, and research infrastructure.

If Australia is to build a whole-of-government plan for science, it will need a champion. Naturally that champion should be a federal minister for science.

Where does science belong?

This is the second period since 1931 that Australia has been without a science minister, the previous time being for 15 months during the Abbott government over 2013 and 2014.

Our history with science ministers has been a somewhat potted one. Since 1931, the science portfolio has been associated with a wide range of other portfolios, including industrial research, education, training, consumer affairs, technology, small business, customs, tourism, resources, innovation and skills.

In recent times, the Australian government has connected the science portfolio with industry, which is a reasonable place for science to sit given the government wants science to produce a return on investment for the country. The industry portfolio has generally included science since 1994, when the Keating government established the Department of Industry, Science and Technology. Since then, there have been 16 science ministers working with either industry or education, and more recently, with innovation.

There are a few ways to interpret this history. Perhaps successive governments have still not quite worked out where science should sit. Although there’s a level of understanding that science is crucial to Australia’s prosperity, and is fundamental to a wide range of portfolios, there appears to be no consistent, bi-partisan view of where science belongs.

The Australian Academy of Science, Science and Technology Australia, and the Australian Council of Deans of Science were all disappointed to see science removed from Cabinet.

These peak science bodies argue the lack of a science minister is at odds with the government’s National Innovation and Science Agenda (NISA), which described science and innovation playing a major role in Australia’s policy agenda. Remember the “ideas boom”? That was NISA.

The NISA report states that: “Innovation and science are critical for Australia to deliver new sources of growth, maintain high-wage jobs and seize the next wave of economic prosperity.”

Senator Cash has echoed these sentiments this week, recognising the importance of science in “fuelling our economy by creating new businesses and jobs to ensuring we are healthy and have the best quality of life”. She also pledged to make gender equity in STEM one of her priorities during her meetings with the Superstars of STEM - a group of high-achieving female scientists acting as role models for young women and girls, and working towards equal gender representation in the media in STEM. Cash’s support would hold a lot more weight if she were also the minister for science.

Australia has only had one female science minister, Julie Bishop, just over a decade ago.

With 200 scientists and technologists meeting with parliamentarians as part of Science Meets Parliament, the need for long-term funding for science will be a message heard loud and clear by serving members in Canberra this week.

While NISA saw an injection of funding into science and innovation, compared to other OECD countries Australia still fairs quite poorly.

Read more: Infographic: how much does Australia spend on science and research?

The 2015 OECD figures show that Australia spends 2.1% of its gross domestic spending on research and development, which puts it in the middle of the pack. 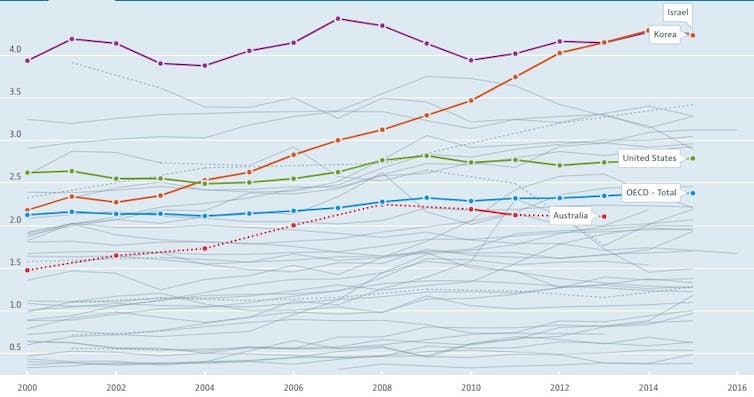 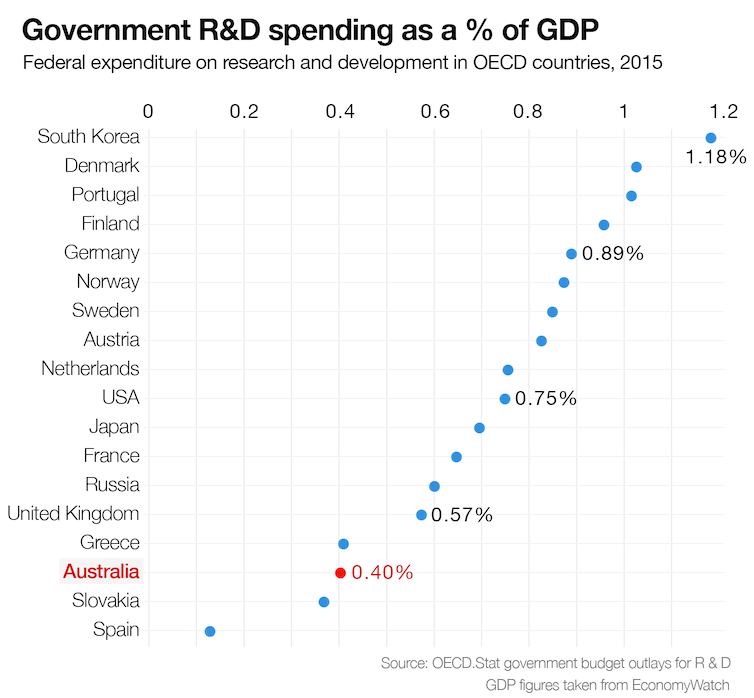 The two world leaders in terms of their gross spending on R&D are Israel and Korea, both currently sitting on about 4.2%. But their stories are different. Israel has maintained this high rate of investment in R&D for a sustained period, while Korea has been ramping up.

Korea also focuses heavily on basic research (the creation of new knowledge for its own sake without immediate applications) and is committed to education in science, technology, engineering and maths. Israel is known for its translational research. Both countries have a strategic and sustained approach to R&D investment.

Australia’s funding on R&D, on the other hand, has decreased and plateaued since its high of 2.3% in 2008.

Science and innovation clearly do go hand in hand, and fundamental research is a vital first step towards translational research, which provides the government with the return on investment it seeks. And we need more young people studying STEM to help drive the economic development that science and technology drive.

Which brings us back to Emma Johnston’s call to action, a whole-of-government plan to invest in science. I agree with Johnston’s statement,

Australia needs a powerful and secure Minister for Science to rise above the short-termism and instability.