Filicide, the killing of a child by their parent or caregiver, is estimated to account for 18 to 25% of family homicide cases in Australia. Filicide often involves multiple victims and has a devastating effect on both families and communities. Despite this, comparatively little is known about it.

In Australia, estimates suggest that 25 children are killed every year by a parent or caregiver. Children aged less than one year are at greatest risk.

Because of differences in jurisdictions around reporting and legislation, child deaths are recorded and analysed individually by states and territories. National publications that analyse police data are limited, and only report aggregate data.

This broad approach precludes any in-depth analysis of risk factors and circumstances around individual cases, resulting in a somewhat piecemeal understanding of child-abuse-related fatalities.

Understanding filicide is particularly difficult because it is uncommon. However, given the impact it has on communities, it is necessary to examine some converging risk factors to understand where individual and situational factors combine to increase the risk.

Understanding filicide has generally focused on motive, perpetrator gender, or the biological relationship with the victim.

Combining these factors may develop a more nuanced perspective of filicide. This is particularly important given the diversity of families in contemporary Australia. Separation, divorce and other complex living arrangements for children have broadened the concept of families, making a more detailed approach warranted.

Further reading: How we live now: Australian families at a glance

Our research aimed to identify similarities and differences between cases of filicide according to victim-perpetrator relationship.

We identified five main victim-perpetrator relationships at the time of the incident. There were too few cases involving a de facto female, separated mother, and single father to include in our analysis. 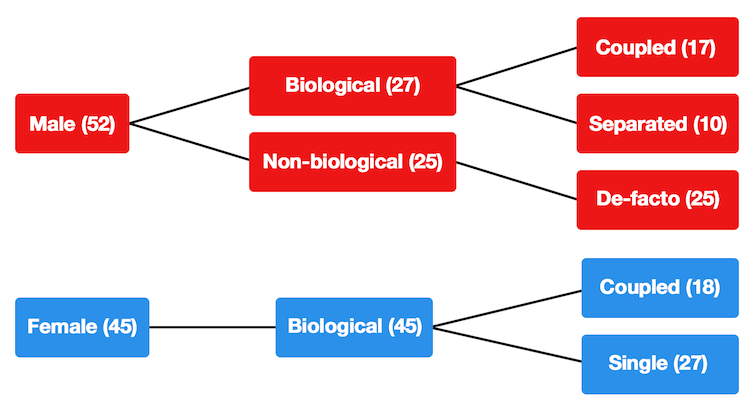 However, substance abuse was not a distinguishing factor for any perpetrator, gender or relationship.

Where there were multiple child victims, they were more likely to have been administered sedatives before death.

Prior to the filicide incident, separated fathers were often described as loving, whereas coupled fathers were more likely to have had a history of intimate partner violence.

In contrast, de facto fathers were more likely to have abused the child in the events leading up to the fatal incident. However, they were least likely to commit suicide at the time of the incident.

In terms of the cause of death, violent deaths (resulting in head/spinal injuries or multiple abdominal injuries) were more common for victims of male perpetrators. This was particularly the case with de facto males. Female perpetrators most commonly killed by asphyxiation.

Applying this research to prevent filicide

Because it is uncommon, and the perpetrator is often unknown to services prior to the event, predicting filicide is almost impossible. Preventing filicide, however, may be possible in some cases.

Filicide crimes are highly variable and like all classification systems, there are limitations. However, the more likely that research identifies patterns that have an application for practice, the greater the opportunity for prevention.

Given that filicide involves parent or caregiver perpetrators, understanding the various contexts in which it occurs is one way to raise awareness of children at risk of serious abuse. This is particularly important in child protection, but equally so in community corrections, primary health care, and maternal and child health settings.

An improved understanding of the circumstances in which filicide occurs may contribute to its prevention by improving the ability of practitioners to identify high-risk cases. This would be aided by the systematic collection and analysis of information across all Australian jurisdictions.