We’ve picked all the low hanging fruit when it comes to new ideas, and the world is set for more parsimonious times. This is the idea put forward in a recent research paper by Nicholas Bloom, John Van Reenen and their co-authors.

This message should be taken seriously but not simplistically.

First, let’s consider the assertion that productivity growth has been declining. In the paper, the data presented is on “total factor productivity” growth. This is a rather convoluted measure of goods and services produced per worker.

Economists tend not to use simple measures (such as GDP per worker) to illustrate productivity, as this would also count other inputs into the production process (such as factories). Accordingly, they subtract these assets from output to get a measure of output per worker in a complicated statistical procedure. This measure is called total factor productivity.

But really this elaborate measure is making two wrongs equal a right. Measures of assets are based on archaic accounting standards which are incomplete.

It is not surprising therefore to get estimates of total factor productivity that throw up strange results such as unexplained falls in productivity. As a measure of long-run output per worker, this measure is too massaged to be convincing.

A clearer measure is the amount of goods and services available to householders per hour worked.

Below I have estimated this ratio for the largest 21 OECD countries combined, since 1952. It reveals a flat trend rate of growth in productivity of about 2.6% per annum. Although this understates true productivity because indexes of price aren’t very good at representing changes in product quality (think of how much better computers have gotten over time). 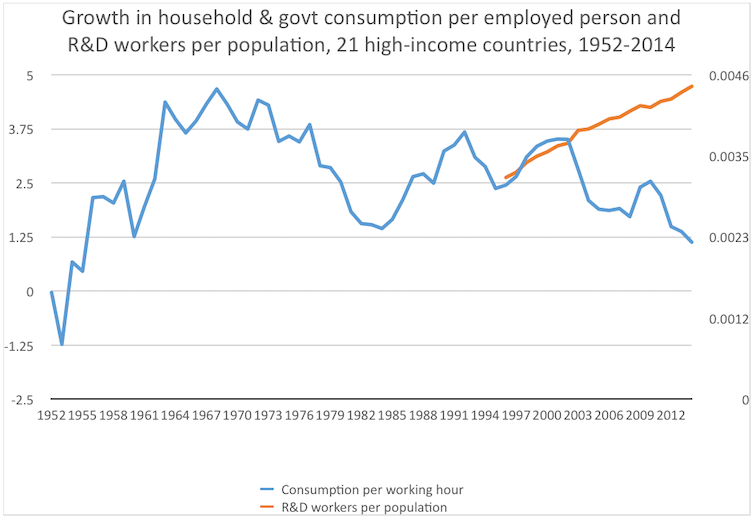 There has been a steady increase in the number of researchers since 1996. But in the past 30+ years, there has been consistent empirical evidence that higher research and development causes firms, industries and countries to experience faster rates of growth.

Without more consideration, it is a big stretch to go from lower than expected growth in per capita output to “we are running out of ideas”.

There may be other limits on growth

What if, the bottleneck – if we want to call it that – to faster growth is not the generation of new ideas (only some of which comes from research and development workers in any case), but from the ability to successfully translate those ideas into reality?

We know that there tends to be many more ideas than are actually implemented. However, many ideas that are technically feasible are not cost effective; are out-competed by better ideas or simply are not invested in.

There is a saying that for every $1 spent on research, you need to spend $10 on development and $100 on translation.

The issue may not be that spending on research and development is becoming less productive, but that the economy is missing important complementary investments into research translation and change management.

Alternatively, it may be lack of risk-loving investors.

Most productivity gains are from catch-up to the frontier

We know that most productivity gains come from new-to-the-firm innovation – laggard firms catching up to those pushing the envelope. A policy focus at this end is needed.

It’s not easy to know what ideas will continue and transform economies and what ones will peter out. Recent examples of scientific progress, including genetic engineering, artificial intelligence, 3-D printing, augmented reality and robotics, may have enormous economic impact.

They may be the transformations we need to manufacture all our material needs with only 2% of our workforce, to cure or prevent diseases, to provide carbon-free energy, or mitigate political events that destroy lives and livelihoods. It is a bit trite to say our forebears invented electricity, the steam engine and the internet – what did we invent last week?

For a more optimist view of the future read Joel Mokyr.

Written by Beth Webster, Director, Centre for Transformative Innovation, Swinburne University of Technology. This article was originally published on The Conversation. Read the original article.