Vital Signs is a report that gathers good-quality data about a city from reputable sources to provide a snapshot of its community. Vital Signs identifies things to celebrate and things to improve.

I first saw Toronto’s 2006 Vital Signs through my earlier advisory work for community foundations around Australia. I was hugely impressed and could see the value of an independent set of data to check a community’s health and wellbeing.

When I was appointed CEO of the Lord Mayor’s Charitable Foundation, essentially Melbourne’s own community foundation, producing Vital Signs was a potential opportunity.

Community foundations provide grants for charitable purposes and often work collaboratively, using their knowledge and networks to help make a difference. The Vital Signs report provides us with up-to-date data on which to base decisions about our granting priorities.

Most importantly, the reports are intended to assist other foundations, leaders of not-for-profit organisations and policymakers working on the various issues.

So, what did we find in Greater Melbourne Vital Signs 2017?

What can we celebrate about our city?

Overall, education is a strength: 95% of children in Victoria attend preschool. And 82% of young people finish Year 12 (compared with 55% 50 years ago).

Also, 87% of children are in good health.

An impressive 95% of residents participate in or attend arts and cultural events.

What are Melbourne’s biggest challenges?

Homelessness and the lack of affordable housing remain big challenges for Melbourne. The median price of housing across Greater Melbourne has increased by 19% in the last five years. A person living on income support payments can afford only 0.7% of private rental properties.

The number of older women “couch surfing” has increased 83% since 2012. Of the people using homeless services, more than half are under 25.

Despite much higher school completion rates than 50 years ago, youth unemployment is too high at 13.5% of young people (aged 15-24 years). Only one-third of graduates seeking full-time employment were able to find a job within four months. Underemployment of young people is even more significant at 18%; the highest since records began.

Our foodbowl, which has a wonderful capacity to grow 82% of the city’s vegetables and 41% of our total food needs, needs to be protected and drought-proofed – 40% of our waterways are under stress.

Another concern is the report that one in five people (20%) reported experiencing discrimination based on skin colour, ethnic origin or religion. This is up from 15% in 2015. This is particularly concerning given that 34% of our population was born outside Australia and nearly 1.5 million people speak a language other than English at home.

Our greenhouse gas emissions are around four times the global average. However, rooftop solar is rapidly increasing – although we sit at 14% residential uptake compared with Queensland at 29%, Western Australia at 23.1% and South Australia at 28.8%. We need to reduce our waste, which is increasing, although 44% is recycled or recovered.

Which challenges should philanthropy target?

Philanthropy occupies a unique place in the Melbourne community. Foundations can take a long-term view, outside of election and annual meeting cycles. We can support innovative responses, sometimes testing and proving new services and programs before government can fund them or a social enterprise model can become sustainable.

Overall, we are a well-educated, arts-oriented city. We are doing well conserving water and improving air quality.

However, we must tackle the lack of affordable housing, reduce youth unemployment, protect our waterways and our food bowl, and actively support social inclusion. And more people need to be more active.

Many of these challenges can be reduced if we take a proactive approach as a community, collaborating across sectors. We will continue to work with our partners on:

Guided by the evidence

Many foundations around the world are increasingly using evidence to inform their granting and other programs.

Community foundations like the Lord Mayor’s Charitable Foundation are a hub for charitable giving and granting in a particular community. They are focused on the key issues facing our communities and also on growing philanthropy. 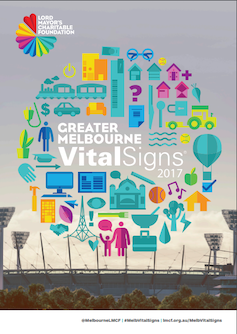 Our Greater Melbourne Vital Signs 2017 report is designed around some general population information about the greater Melbourne community and the impact areas around which the foundation’s grants program is organised: education and employment; healthy and cohesive communities; homelessness and affordable housing; and environment and sustainability.

We bring diverse players together to a safe, independent space to think creatively about community challenges and new solutions.

Our first Melbourne Vital Signs was produced in 2014 with academic research and advice from Community Indicators Victoria at the University of Melbourne.

The advisory committee members are listed on the back cover of the full report and we are very appreciative of their advice and commitment. A full list of research sources, 97 in all, is included in the report.

Written by Catherine Brown, PhD Candidate, Faculty of Business & Law, Centre for Social Impact, Swinburne University of Technology. This article was originally published on The Conversation. Read the original article.