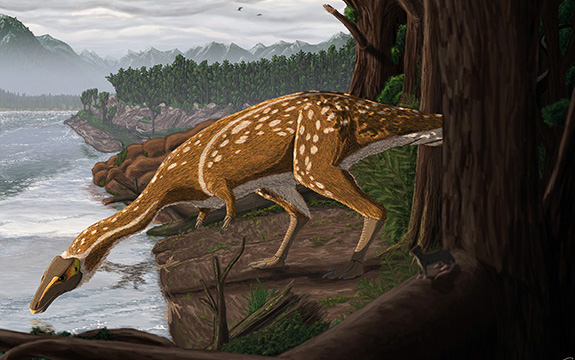 An artist’s impression of what an elaphrosaur may have looked like. Credit: Ruairidh Duncan.

A chance discovery by a volunteer dinosaur digger has unearthed an unusual toothless dinosaur, known as an elaphrosaur, that roamed Australia 110 million years ago.

In early 2015, Dinosaur Dreaming volunteer Jessica Parker found a strange and delicate bone during the annual dig at the Cretaceous-aged fossil site known as Eric the Red West, near Cape Otway in Victoria.

The five centimetre long bone was identified at the Melbourne Museum as a vertebra. It was thought to be from a flying reptile called a pterosaur, albeit one quite different from the Ferrodraco lentoni, discovered in Queensland. When Swinburne palaeontologists Dr Stephen Poropat and PhD candidate Adele Pentland attempted to work out what type of pterosaur it was, they hit a snag.

“Pterosaur neck vertebrae are very distinctive”, says Ms Pentland. “In all known pterosaurs, the body of the vertebra has a socket at the head end, and a ball or condyle at the body end. This vertebra had sockets at both ends, so it could not have been from a pterosaur.”

“We soon realised that the neck bone we were studying was from a theropod: a meat-eating dinosaur, related to Tyrannosaurus rex, Velociraptor, and modern birds,” says Dr Poropat. “The only catch – this ‘meat-eating dinosaur’ probably didn’t eat meat!”

The new Victorian fossil is an excellent match for vertebrae from a strange group of theropods called elaphrosaurs or ‘light-footed lizards’.

And it’s a dinosaur out of time. Most of its known relatives — like Elaphrosaurus from Tanzania, and Limusaurus from China — lived near the end of the Jurassic Period, around 160–145 million years ago.

By contrast, the new Victorian elaphrosaur dates to almost 40 million years later, from the Early Cretaceous Period and is one of only two Cretaceous elaphrosaurs ever found. At around two metres long, it was also rather small for an elaphrosaur.

The dinosaur graveyard at the Eric the Red West site awaits further exploration. Proposed digs this year have been postponed twice because of the bushfire season and the COVID-19 pandemic.

Palaeontologists hope to be able to return safely to Cape Otway to unearth more fossils soon.

The paper describing the new Victorian elaphrosaur, is available at https://www.sciencedirect.com/science/article/abs/pii/S1342937X20301234, It was published in Gondwana Research.