Space lawyer and scientist, Kim Ellis, has been accepted into the highly competitive and prestigious PoSSUM NASA training program at the Embry-Riddle Aeronautical University in Florida in the United States, commencing in April 2020.

Kim is a Senior Lecturer in Space Research and Law at the Centre for Astrophysics and Supercomputing at Swinburne.

Project PoSSUM is a non-profit research and education program researching Earth’s mesosphere and communicating the critical role that it plays towards understanding our global climate.

Its Scientist-Astronaut Program prepares candidates for suborbital human space flight to build unprecedented models of this region of our atmosphere through tomographic imaging and in-situ sampling of noctilucent clouds, tenuous cloud-like phenomena in the upper atmosphere of Earth.

After graduation, Kim will be eligible to conduct aviation and/or spaceflight missions for the NASA 501 astronautics research and education program.

Kim’s pathway to the NASA program has taken a few twists.

“My plan was to go to university and be a veterinary scientist, but I didn’t get quite enough marks for that,” she says.

Instead, she studied science part-time, specialising in chemistry, while working at the mining company BHP as a trainee industrial chemist.

After five years at BHP, Kim moved on to Rio Tinto where she worked in a mineral sample analysis lab for three years before returning to BHP in their uranium technology team.

With the closure of BHP’s Newcastle site in the late 1990s, Kim was made redundant. A subsequent conversation with a recruitment consultant about her plans for the future motivated her to follow her dreams to connect with what she really loved... space!

After taking a career break to have and raise her two children, Kim went on to study law. During this time she founded her company International Earth and Space Technology Pty Ltd, which delivers specialty space and STEM education consultancy services around the world, including at the International Space University in France. 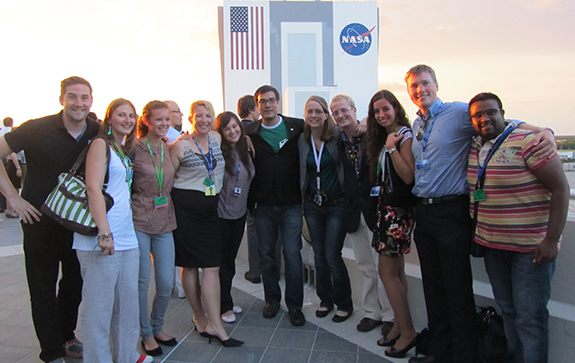 Kim (fourth from left) with the teaching assistants she supervised at the NASA Kennedy Space Center.

In 2012 she received an Australian Endeavour Award from the Australian Government, which enabled her to participate in an international cooperation project in the US and work at the International Space University at the Kennedy Space Center.

Throughout her career Kim says she has had many role models. Her strongest role model was her mother who instilled in her the idea that education gives you freedom. Another was her social science teacher, who helped her to develop self-confidence and to believe in herself.

She is excited to be participating in the PoSSUM project.

“I am looking forward to being able to use this training as an inspirational platform for other Australian women – no matter their age – to pursue STEM fields,” Kim says.

“If you love what you do, it doesn’t feel like work.”

Kim’s participation in the PoSSUM program has been made possible thanks to the generous support of Swinburne’s Alumni community.