Light could replace invasive techniques to measure brain temperature, eliminating the need to place a thermometer in the brain when treating a range of neurological disorders.

Researchers from Swinburne have teamed up with Universidad Autónoma de Madrid in Spain and Stanford University in the United States to develop a technique for measuring sub-degree brain temperature changes using near-infrared light.

Knowing the temperature of the brain is often essential for disease diagnosis. Heating specific areas can also be useful in treating the symptoms of neurological disorders such as Parkinson’s disease and chronic pain.

However, existing techniques for measuring brain temperature are either not very sensitive or require direct contact, which necessitates making a hole in the skull and risks damaging the organ.

Scientists, led by Swinburne Postdoctoral Research Fellow, Dr Blanca del Rosal Rabes, have developed a technique that uses thermosensitive nanoparticles to measure brain temperature through the skin and the skull.

The nanoparticles emit near-infrared light which, unlike visible light, can penetrate biological tissue. This enabled the researchers to monitor brain temperature in real-time in a mouse model of coma, showing that the dramatic decrease in brain activity was accompanied by a reduction in brain temperature.

“It’s a very cool discovery,” says Dr del Rosal Rabes. “If it can scale up to humans, the approach could make diagnosis of brain injury and neurological trauma much, much easier.”

This research has been published in the journal Advanced Functional Materials. 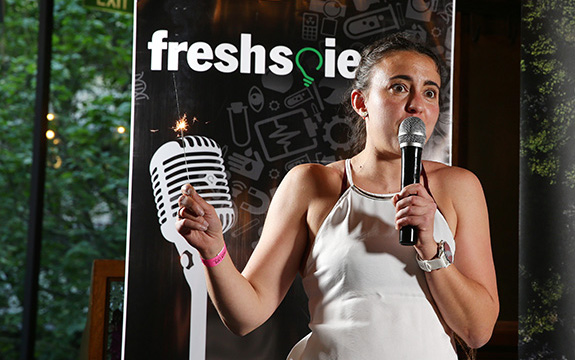 She has also received the J G Russell award from the Australian Academy of Science, worth $7000. This award is aimed at financially helping talented younger researchers. It recognises the costs involved in experimental research, and can be used towards the cost of equipment, maintenance, and travel.