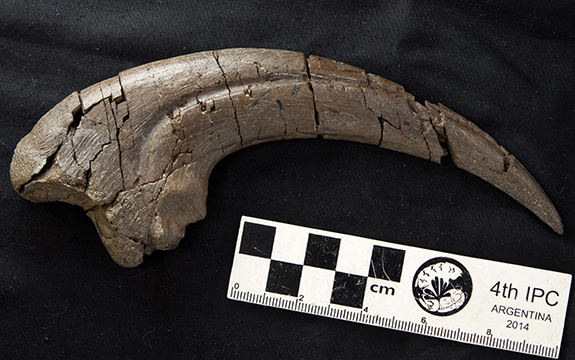 Swinburne and Museums Victoria have announced the discovery of several theropod bones, including a 20 centimetre long hand claw, from the Otway Coast of Victoria.

The bones were found in the Eumeralla Formation, a geological deposit that is approximately 107 million years old.

Fossils of theropods – the group of dinosaurs that includes such famous predators as Tyrannosaurus and Velociraptor, as well as modern birds – are relatively rare in Australia. The new Victorian specimens were discovered at a site known as ‘Eric the Red West’ on the Otway Coast between 2011 and 2017, by volunteers working on Dinosaur Dreaming team’s annual digs.

These digs are held each February and are coordinated by husband and wife paleontologists, Swinburne’s Professor Patricia Vickers-Rich and Dr Thomas Rich from Museums Victoria.

Previously, the Eric the Red West site had produced the skeleton of Diluvicursor pickeringi, a unique species of ornithopod dinosaur that was described and named in 2018.

The new theropod fossils were found isolated rather than as part of a skeleton. This is because they were carried some distance from where the theropods died by ancient, deep, fast-flowing rivers. These rivers snaked through the then-narrow rift valley (now Bass Strait) that opened as Australia and Tasmania separated during the Early Cretaceous period, more than 110 million years ago.

Many of the theropod bones found at the Eric the Red West site are from a group of theropods called megaraptorids. Intriguingly, they look almost identical to those of the Australian megaraptorid theropod Australovenator wintonensis from western Queensland.

Australovenator lived around ten million years after – and thousands of kilometres further north than – the Victorian megaraptorid. This suggests that megaraptorid theropods roamed over a large part of Australia and for a long period of time.

The research on the new Victorian theropod remains was led by Swinburne’s Dr Stephen Poropat as part of a postdoctoral research fellowship in vertebrate palaeontology.

According to Dr Poropat, who has conducted research on Australian dinosaurs for several years, the presence of megaraptorid theropods in Victoria that are nearly indistinguishable from Australovenator – but older than it by around ten million years – is unusual.

“The similarities between the Victorian megaraptorid remains and Australovenator are striking,” Dr Poropat says.

“If we had found these theropod bones in Queensland, we would probably have called them Australovenator wintonensis. But they’re from Victoria, which prompts the question: ‘Could one dinosaur species exist for more than ten million years, across eastern Australia?’ Maybe.” Australovenator lived in Queensland around 95 million years ago, alongside several species of long-necked sauropod dinosaur (like Diamantinasaurus matildae and Savannasaurus elliottorum). However, the 107 million year-old rocks of western Victoria that produced the new theropod bones have not yielded a single scrap of sauropod bone.

“This is important, because it tells us that Australian megaraptorid theropods weren’t entirely dependent on sauropods for food,” says Dr Poropat.

So were megaraptorid theropods relying on another food source in Victoria?

“Adult sauropods were many times heavier than adult megaraptorids, so attacking them would have been dangerous. What we do know is that another group of plant-eating dinosaurs – the ornithopods – were abundant in Victoria (based on bones) and in central Queensland (based on footprints).

“Although ornithopods might have been ideal meals for megaraptorids in both regions, Queensland’s megaraptorids had another food choice – sauropod steaks! Whether they were fresh or on rotting carcasses, they would have been a pretty tempting item to have on the menu!” 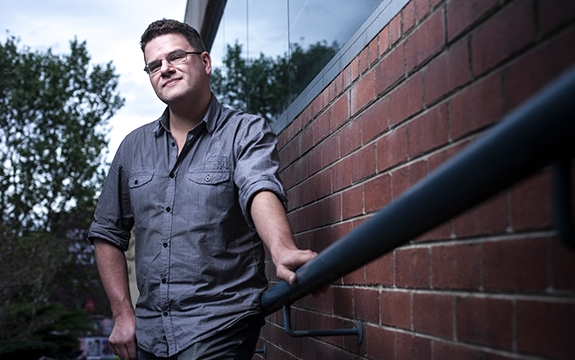 The new theropod bones are held at Melbourne Museum. Another field trip to the Eric the Red West site is planned for November 2019. Dr Poropat hopes that more megaraptorid bones might yet be found there.

The scientific paper describing the new fossils was published on Thursday 10 October in the Journal of Vertebrate Paleontology.