From monologue to dialogue: towards playable cities 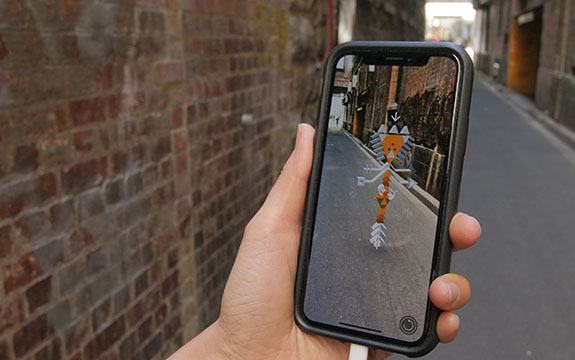 Playing “64 Ways of Being” in the Melbourne Laneways.

A cityscape is made of stubborn material: concrete, steel, granite, tarmac. It is not malleable or modifiable without enormous financial and political resources. It is a monologue often performed by extremely wealthy and powerful entities. A consequence is such spaces can often feel oppressive and conformist, quashing any impulse for creativity or expression.

In contrast, play is a dialogue, an exchange between things, whether they take the form of people, ideas, or an environment. Within this dialogue lays a capacity for change, for (re)creation, for offering new perceptions of a world. Such experiences have measurably positive impacts upon people’s physical and mental health.

Play’s natural companions are open spaces in which folk can come together, filled with rich objects generative of novel experiences. This is the traditional role of parks, sports fields, and playgrounds, historically taking up acres of land within a community. Yet within the city, space is measured and costed by the foot, not the acre. The desire for capital trumps the need for play within such domains.

We thus find ourselves confronted with a fundamental design problem: how can we provide play when the space, literally and figuratively, does not afford it? How do we open up the city for dialogue? We have to get smart with play.

ARG! The problem of screens

Augmented-Reality Games (ARG) such as Pokemon Go are successful in bringing people out to play. Their very design requires movement across different physical locations. Suddenly, we have players eager to explore the cityscape. We should, however, think through how these experiences interact with our cities.

Such games pay no attention to the idiosyncrasies of a city, its particular layout, landmarks, traffic systems, sectors and businesses. Nor do they acknowledge the player’s immediate environment, taking account of common walkways, gathering areas, fashionable spots, or hidden treasures such as Melbourne’s graffiti-strewn laneways.

Instead of bringing the cityscape into the experience, games such as Pokemon Go simply project their game onto the city. As game artist Troy Innocent told ACMI:

Pokémon Go is a recent example of creative technology that brought play into cities across the globe. However, while players can achieve their steps-per-day goals playing Pokémon Go, it doesn’t make the city itself playable. Instead, the game rebrands the city.  Unfolding mostly on screen, it misses an opportunity to connect people and place."

In a way similar to the design of the city, such ARGs are a monologue, forcing the player to stare at the screen and listen to the designer as they demand the player go here or there, ignorant of the unique experiences each city affords. As Innocent remarks, in a truly playful experience, “localism and context are everything”

Any playful design offers a new mode of perceiving immediate space. In phenomenology, we call this the founding of a ‘world’, such as the world of sport or the world of Pokemon, where new structures of meaning emerge and take hold of experience. The most poignant designs don’t simply steamroll over the immediate context, but actively attend to it, generating novelty within the constraints of the present environment.

A great example is Hello Lamp Post based in Austin, Texas. The game works specifically with Austin’s unique cityscape to surprise and delight people. As a person notices a code stuck to a lamp post, fire hydrant, post box or anything else, they simply text a phone number with the code and “Hello [object]!”

They receive a playful response from the object with further questions. The person literally enters into a dialogue with their immediate space, seeing it in a whole new light. As technologies such as 5G become more readily available, the possibilities for this kind of interaction can grow increasingly rich.

Another interesting piece is Shadowing, a project which debuted in Bristol, UK, in 2014. Using simple technology installed into street lamps, recordings are made and replayed of people passing under the lights, so the current person walking by can interact with the previous shadow, leaving their own expression for the next person’s discovery.

To make our cities truly playable, we need to work with the distinctive environments of each cityscape. The storied undergrounds of London provide the opportunity for an utterly different design to the laneways of Melbourne; the baroque architecture of Paris encourages an approach distinct from the art deco prominent in, for example, American cities like Miami.

Using the technologies available to us within any smart city, we can change our cities’ monologues into dialogues; we can open up spaces previously closed to us; and hopefully, encourage new ways of perceiving, feeling, and expressing ourselves.