Village Cinemas and Swinburne seek next generation of filmmakers 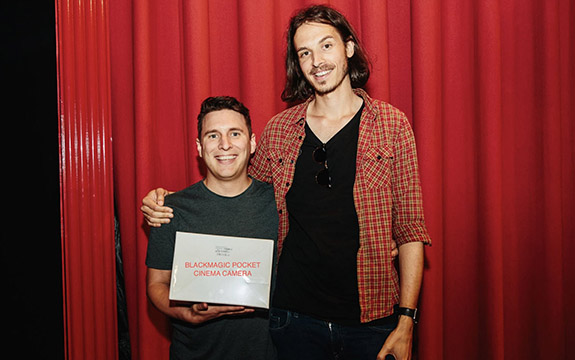 In partnership with Swinburne University of Technology, Village Cinemas is asking emerging filmmakers to produce a short film inspired by this year’s theme, ‘Excess’.

In the 2018 competition, Swinburne Film and Television alumni Luke Goodall and Marc Gallagher came second with their film Choose Your Own Adventure.  They have gone on to carve successful careers in the industry.

Mr Goodall says the pair decided to enter Unscene because they felt their work complemented the theme of the 2018 competition, 'Choices'.

"We had been talking about digital choices and how much they rule our modern lives. We were also in the middle of production on a Black Mirror parody series called Antisocial, so we thought it would be funny to write a short film about a 'choose your own adventure'-style movie – like the old Goosebumps gamebooks" says Mr Goodall.

Antisocial - Choose Your Own Adventure from Luke Goodall on Vimeo.

Luke Goodall and Marc Gallagher’s film is a riff on ‘choose your own adventure’-style novels.

He says the experience of seeing their work on the big screen at the Unscene awards night was just one highlight of taking part.

"It was awesome to see our work up there on the big screen with so many other great films and filmmakers, and to come home with a prize and recognition from the festival was just unreal. We got to take home a brand new Blackmagic camera and some cold hard cash, which really set us up nicely this year and has been a good motivator to keep making more stuff."

Since placing in the competition, Mr Goodall and Mr Gallagher say they've had a great year.

"Our series Antisocial went off. It’s had millions of views and attracted national press, and we've since had interest from a few networks about branching into TV and doing something bigger.

"It's competitions like this that give you a great excuse to get some mates together to make something that can really kick start your career. We'd recommend this festival to anyone, regardless of experience."

“The emerging talent and high calibre of work truly impresses every year. The creativity, and the level of eagerness and production, just goes to show how much talent is at our doorstep,” says Mr Robin.

Each short film will be publicly voted on through the Unscene website, then judged by industry experts. The winner will be announced at gala event held at Village Rivoli in December.

The winner will receive a cash prize of $10,000 and gear including an URSA Mini Pro digital film camera from Blackmagic Design, one of the world’s leading innovators and manufacturers of creative video technology. The total prize pool for first place is valued at $22,144.

Through the partnership with Swinburne, Village Cinemas aims to grow the festival and expand the opportunities for applicants.

Swinburne Professor of Communication Design, Simone Taffe, is excited to see what filmmakers will create for this year’s festival.

“Swinburne continues to encourage students to take hold of the opportunity and inspire audiences with their creativity. The festival is something all aspiring filmmakers should enter. It highlights their work on the big screen and gives them valuable industry experience for their future careers. It also gives students the chance to make connections and networks through Village. This is a priceless experience for all film students,” says Professor Taffe.

The Unscene partnership builds on Swinburne and Village Cinema’s existing relationship, which has resulted in a number of projects, including:

Village Cinemas is seeking short films up to five minutes in length that are original, inventive and captivating. Any aspiring filmmaker - amateur or student - over the age of 18 can apply.

Entries opened on Saturday 1 June, and close Wednesday 16 October 2019.  The awards gala event will be held at Village Rivoli on 5 December 5.