Swinburne takes ‘Digital School in a Van’ to Pakistan 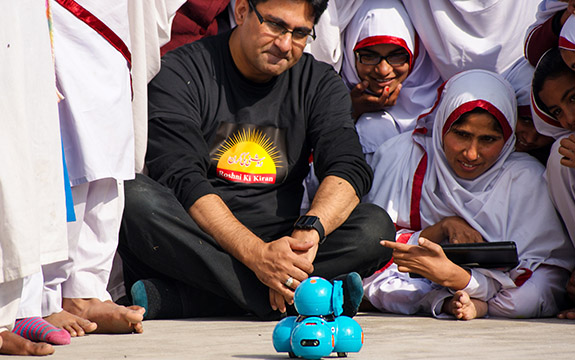 Dr Ahmed travelled to Pakistan in January 2019 to educate locals in how to use digital technology.

Thousands of underprivileged children from the heart of Pakistan have been introduced to digital technology, thanks to an initiative by Swinburne’s Dr Ashir Ahmed and a team of volunteer collaborators, including his 11-year-old son Bilal.

Digital School in a Van is part of a research project into digital literacy coordinated by Dr Ahmed, who is a lecturer with Swinburne’s Department of Media and Communication.

Dr Ahmed travelled to Pakistan in January 2019 to educate locals in how to use digital technology. Armed with laptops and computers, iPads, a printer and a projector - Dr Ahmed educated locals in using the internet, Microsoft Word and other essential software. He supported his work using training tools written in local Urdu.

The project is jointly funded and supported by Swinburne, Tayyiba Education Trust Fund, Digi Do Good Mob and Roshani Welfare Society, and boosted by money collected by Dr Ahmed’s own children.

“This was a proof of concept mission,” says Dr Ahmed.

“We used a Social Impact Navigation Tool which will help us track the results of our efforts. We want to see beyond the feel-good aspects of being the first people to put a computer in the hands of these children and understand the impact of digital literacy on their lives.

“As an expatriate Pakistani living in Australia for the last 13 years, it was very important to me and the team that we were not arrogant about the opportunity we were hoping to bring. We first formed a cross-gender and inter-generational advice team of volunteers - and their recommendations were incredibly valuable.”

Dr Ahmed says that having a PhD in Information Systems meant he was not expecting to introduce digital literacy with a paintbrush and paper.

"But that’s what the advice was in order to break down barriers. Another gem of an idea was to use really young people, such as my son Bilal, as a bridge,” he says.

“My wife and I decided to pay for Bilal to join me on this trip for him, as an Aussie kid, to gain some insight into his ancestral home. Amazingly, he and two other young Pakistani Australian volunteers, 10 year-old Najim and his 17-year-old brother Subhan Wahid, were the stars of the show.” 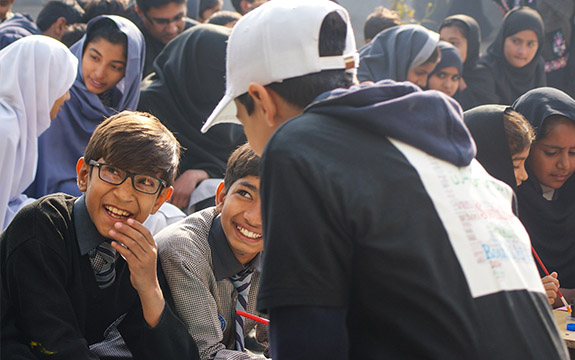 Local students in Pakistan learnt how to use the internet and essential software skills.

“After building confidence in our team with the local students, much to their amazement and delight, Bilal demonstrated how his toy robot ‘Dash’ was controlled by an iPad. Suddenly the students were excited and all wanted to have a go.

“Quickly, and this was our experience in all four of the schools we visited, once we handed out iPads, laptops and other digital technologies, the school children were amazingly fast at learning how to operate a computer - it was almost intuitive.”

Dr Ahmed says that there were parental concerns around digital literacy.

“The older generation feared computers were simply the next ‘evil’ after mobile phones,” he says.

To combat this perspective, the group also took advice on demonstrating the power for good these tools can deliver by showing them apps that improve understanding of the Quran, for example - and printed out family trees, complete with photographs, which delighted the elders.

“Perhaps the most amazing school was an orphanage in the middle of the fields 50 kilometres from Lahore. I have never seen a cleaner or happier education facility, or experienced such enthusiastic learners. I was particularly humbled to see a profoundly disabled girl with eyes gleaming as she grasped the power of the device in her hand for the first time and considered briefly the possibility digital literacy represented for her.”

As a parting gift to each school, and as a way of reminding the students the team would be back, Dr Ahmed and his team planted a tree and asked the pupils to keep it alive until their return.

After a week-long tour by the ‘Digital School in a Van’, the laptops and other computing devices used were set up in a Laboratory at Roshani’s Pakpattan office and the local schools are being invited to come and use them, with data being recorded.

This information and other data collected will be used by the team to develop an academic paper, which is expected to be complete by mid-2019. 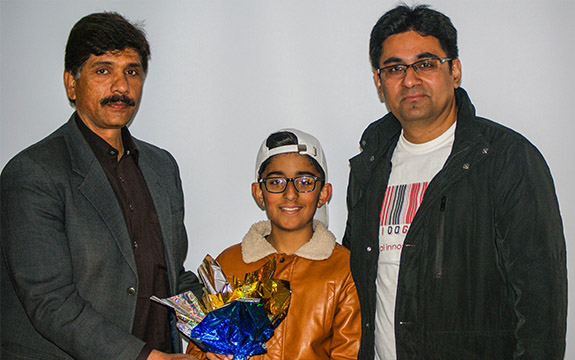 Dr Ahmed (right) was accompanied by his son Bilal (centre) who helped to raise money for the project with his siblings.

The ‘Digital School In a Van’ initiative was also greatly encouraged and supported by Swinburne’s Dr Jason Sargent, Director of the Information Systems for Social Impact Research Group at Swinburne’s Business School.

Bilal Ahmed said he and his siblings raised $64.30 collecting coins by going without treats in the lead up to the trip. The money was stored in an old baby formula can of his sister’s and was used to buy pens and markers given to school students in Pakistan.