The Victorian Government has launched a new campaign at Swinburne University of Technology to make Victoria the home of the new Australian Space Agency.

"Our state is ready to support the growth of the Australian space industry that operates on a global scale and beyond," says Associate Professor Alan Duffy. More than 9000 kilometres from the observatory, Swinburne astronomers have been able to control the Keck telescopes with a direct video link to the telescopes since 2009 from an on-campus control room.

Using the WM Keck Observatory’s cutting-edge instrumentation, Swinburne astronomers have produced landmark discoveries about the Universe such as: 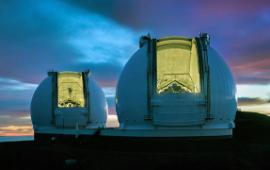 State Industry Minister Ben Carroll says Victoria is the ideal home for the new agency and its advanced manufacturing and data science sectors, with more than one-in-five Australian space-related science and technology companies based here.

“Victoria has generations of manufacturing experience and major companies willing to invest. This makes us the perfect home for the Australian Space Agency,” says Minister Carroll.