Rendering of the Korean War Memorial for Quarry Park, Footscray.

Researchers and designers from Swinburne’s Centre for Design Innovation have designed a memorial for Korean War veterans. The memorial is a place to commemorate and remember the fallen and publicly recognise Australia’s involvement.

Located in Quarry Park, Footscray, in the City of Maribyrnong the memorial site is west of Melbourne’s CBD. Construction of the memorial has begun with completion due at the end of 2018.

The Melbourne Korean War Memorial Committee is steering the project. The project is also supported by the Government of the Republic of Korea, Victorian State Government, Korean Veteran’s Association of Australia and Maribyrnong City Council. 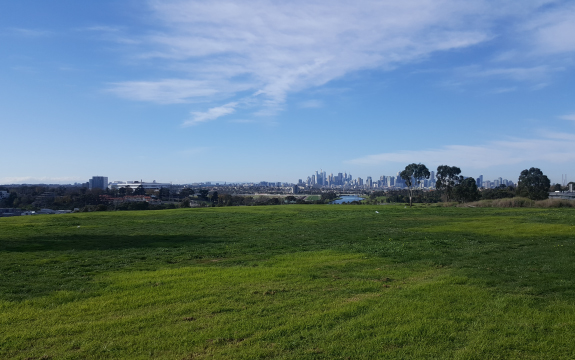 ‌View of the memorial site in Footscray with view of Melbourne CBD.

“The memorial design was derived from the strong bond between South Korea and Australia. It recognises the significant contribution Australian forces made to driving enemy forces out of southern Korea. A path bridges and blends the South Korean and Australian elements of the design,” explains Mat Lewis, Industrial Designer and Project Lead, Swinburne Centre for Design Innovation.

“A winding pathway links to the Taegukgi from the Korean National flag. Perforated panels feature key images and information about the war. The pathway ramps from both ends, reaching a slight elevation in the centre of the memorial. From the centre, visitors can take advantage of the spectacular view of the Melbourne city skyline,” Mr Lewis says.

Plan view of the memorial design with bridge and winding pathway.

The notion of South Korea rising from the ashes since the war, inspired the pillar-styled perforated aluminium panels. They represent progress and development. The panels are placed along the pathway that flows through and integrates with the Quarry Park site. Emotive images of Australian soldiers are perforated into the panels. They represent aspects of Australian involvement in the war, with imagery from both countries. The exterior panels of the memorial, feature national flowers, wattle for Australia and the hibiscus for Korea. Korean stone pavers in the pathway meet bluestone pavers commonly found in Australia.

‌External view of panels at the Korean War Memorial.

Perforated images of Australian soldiers on the central-exterior of the memorial depict them from behind. The soldiers look as though they are looking towards the memorial and Melbourne.

“Visitors can enter at either end of the memorial. The wide path provides space to step back and get the full effect of the perforated images. Garden beds allow for subtle greenery beside the memorial and provide spaces for wreath laying,” explains Mr Lewis. 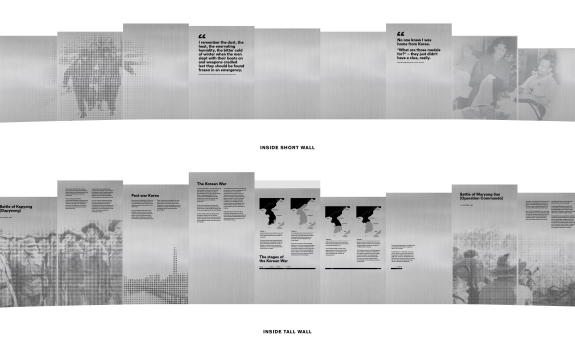 ‌Internal view of perforated panels at the memorial.

The shallow ramped path and panel heights allow wheelchair bound visitors access to take in the view of the city skyline.

“The design is contemporary whilst still being respectful. It’s something you can engage with. You walk amongst it. You pay your respects and gain a greater understanding of the impact of war,” says Mr Lewis.