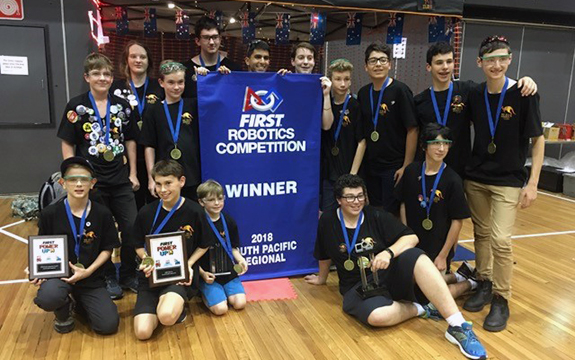 XLR8 won the FIRST® Robotics Competition from a field of 42 teams, including several international teams, at the South Pacific regional championship in Sydney on 16-18 March 2018.

A Swinburne-sponsored team of secondary school students from across Melbourne, called XLR8, has won the South Pacific regional championship of the FIRST® Robotics Competition.

The team also took out the Rookie Inspiration Award for their outstanding success in advancing respect and appreciation for engineering and engineers within their school and community.

Another Swinburne-sponsored team, the all-girl RoboCats, made it to the semi-finals and won the Imagery Award for their dedication to art and illustration. This award celebrates attractiveness in engineering and outstanding visual aesthetic integration of machine and team appearance. 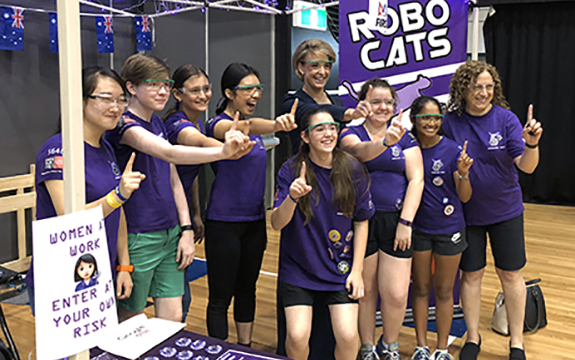 Guided by industry and university mentors and parents, each team built, programmed and tested a 50kg+ robot to participate in this year's challenge, POWERUP.

Their robots were required to participate in an arcade-themed game in which they had to pick up and deliver game cubes to various structures on a basketball court sized field.

The competition theme changes every year, and teams are not permitted to use any robot part they built prior to the game being released  so they have to start building a new robot every year.

Adding to the challenge, teams have to complete building their robots mid-February, giving them about six weeks to brainstorm, design, prototype, build, program and learn to drive their robot.

“The ability to solve a problem within six weeks, build and develop a fully functional industrial robot and the opportunities to engage with STEM in a real-life context has been embraced by the students,” says Deputy Chair of Swinburne’s Department of Education, Associate Professor Therese Keane who has championed this program at Swinburne.

As the South Pacific regional champions, XLR8 have been invited to compete at the FIRST® Robotics Competition World Championships to be held in Houston in April 2018.

XLR8 is supported by Swinburne, Rockwell Automation and BAE Systems.