Australia on its own when managing foreign influence on Australian soil 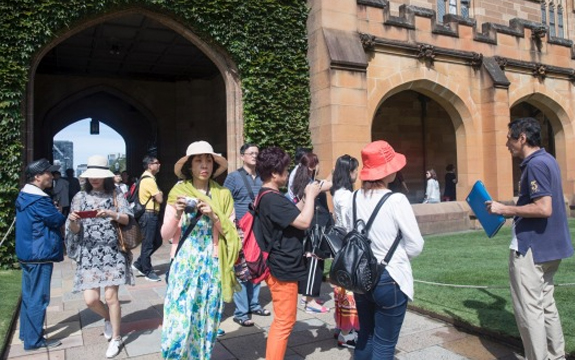 A tour guide with Chinese visitors at Sydney University. One in four university students in Australia is now Chinese.

People in China who follow Chinese-language sites in Australia were startled by the warnings that started flashing on their screens. "All Chinese students in Australia are warned to be on the alert for possible threats to their safety," China's embassy and consulates cautioned in an official alert on December 20. "Attacks and insults targeting Chinese students have been taking place around Australia."

PRC-funded Chinese-language websites and radio stations in Australia, including Melbourne's 3CW, repeated the warning between music breaks, in endless loops, along with a recital of phone numbers for presumably distressed students eager to contact their local consulates and parents.

In February, the central Ministry of Education issued an almost identical message under the ominous title "2018 Warning No. 1 for Study Abroad". Ostensibly, the target audience was students. "All Chinese students studying abroad in Australia should be vigilant, strengthen risk prevention, and pay attention to their personal protection", it warned.

In both cases, the target audience was not students in Australia but parents in China. The warnings were designed to alarm parents and in turn frighten Australian educators, who are keen to win parents' custom, to the point of pressuring the Australian government to back down on issues that had nothing to do with education.

Popular Chinese-language digital news services including Queensland Today (pictured) and Melbourne Today carried stories about the children of students who had come to study committing suicide in despair when they found they could not fit in.

We know this from the sequence of events. The initial warning followed a strongly worded statement from the Chinese embassy on December 6, condemning Australian media for "repeatedly fabricating news stories about the so-called Chinese influence and infiltration in Australia", making "unjustifiable accusations against the Chinese government" and "unscrupulously vilifying Chinese students as well as the Chinese community in Australia with racial prejudice".

And in January, China's consular officials in Melbourne began reaching out to local contacts complaining they were being overwhelmed with inquiries from concerned parents in China seeking reassurance that their children were safe after hearing reports of physical attacks and racial abuse. One contact told me the consulate urged her to convey the parents' messages of concern to Australian authorities. The intent appears to have been to prompt the government to suppress "anti-Chinese racism" in Australia, with the implied threat that students would stop coming if the government did not change its tune.

Think about it. There were no plausible reports of attacks in Melbourne, no insults out of the ordinary, no race riots. Australia was packing up for Christmas. How could parents be so deeply concerned if there were no serious grounds for concern?

Welcome to the topsy-turvy world of Chinese agitprop, an art form long perfected in China, now playing around Australia, with implications for national prosperity and security.

China is a mercantilist state, or what The Economist colourfully calls ''a great mercantilist dragon'' that ''punishes foreign businesses for the actions of their home governments''. AP

Hugh White's Without America  in Quarterly Essay late last year goes some way to explaining what this is all about. According to White, China has emerged the winner in the strategic contest between it and the United States for regional supremacy. Australia has to start learning to live without America and in a very real sense with China.

The willingness White showed in his earlier work to accede to China's demands in view of its expanding role as a regional actor is less apparent in Without America. There is probably little point proposing to make this or that concession to China when Beijing is prepared to take whatever you are prepared to concede without bothering to ask. White sensibly shifts from asking what should be conceded to China, whatever the cost, to asking what it is that Australia and other countries should not concede to China at any price. He calls on Australians to be "a little more thick-skinned" in responding to political pressure from Beijing and to resist "more insidious forms of Chinese pressure and influence" even if this costs the country dearly in exports.

This brings us close to where we are now sitting in the national debate on China's influence operations.

Australians are asking themselves whether they are prepared to yield to the incremental challenges the government of China presents to their sovereignty, prosperity, cohesion and security, and what balance they are willing to strike between their economic interests and their capacity for self-determination and sense of self-worth.

It is a tough ask. And it is sobering to think that even if White were wrong about China's strategic triumph, it would make little difference on these questions. What matters here and now is not whether China wins or loses in strategic competition with America but whether Australian dependence on Chinese markets inhibits Australia's willingness or capacity to defend its sovereignty and integrity on its own account. Australians are on their own when it comes to managing foreign influence operations on Australian soil.

Dependence on Chinese markets may not compel Australians to overlook Chinese government interference operations but it does ask them to weigh the cost of any action to put an end to them. The greater its economic dependence, the more vulnerable Australia becomes to China's political and strategic leverage, and the more likely China will try to use that leverage for strategic advantage.

Education is a case in point. Beijing is making its irritation felt in many ways, including postponing or cancelling visits by business and government delegations in several industries and targeting particular industry sectors for retaliation. It sees a vulnerable pressure point in Australia's relative dependence on the Chinese market for education exports. Education leaders are rapidly discovering that China is not an ordinary market economy.

China is a mercantilist state, or what The Economist colourfully calls "a great mercantilist dragon" that "punishes foreign businesses for the actions of their home governments'. Beijing has the capacity to impose heavy costs on Australian businesses in every sector, small and large, in every region in Australia, should it decide to try to compel the Australian government to comply with its wishes.

As Australia's largest service export, and third-largest export overall, international education is clearly a point of vulnerability. Beijing is leveraging its market power to pressure Australian universities and firms to plead with their home government to submit to Chinese government demands on foreign and security policy. Phil Honeywood, CEO of International Education Association of Australia, read the trend correctly when he told The Australian: "It is unfortunate that certain Chinese interests are using education to potentially punish Australia for foreign security concerns that are unrelated."

Australian educators don't need to offend the government of China to feel its wrath. For the same reason no amount of effort by educators to assuage Beijing is likely to temper its approach. Vice-chancellors can try as they like to reassure Chinese parents that Australia is a safe and welcoming place for students but they cannot change community and government approaches to China's influence operations in Australia. This is what Beijing wants from them.

In other sectors business leaders are trying to close down the national conversation, or at least feign trying. Andrew Forrest of Fortescue Metals told an Australia China Business Council dinner on March 1 that the  Australian debate about China "fuels distrust, paranoia and loss of respect'', and "has to stop". University vice-chancellors can do many things but they cannot follow Forrest in calling for to an end to public debate on matters of national interest without calling their credibility as educators into question.

If anything, Beijing's attempt to intimidate Australia's higher education sector suggests the national debate on Beijing's influence operations has not gone quite far enough. To date it has focused on donations towards political parties, funding for university centres, targeted investment in critical infrastructure and community media, control over community organisations, and so on, on the assumption that the underlying purpose is to buy or win influence of one kind or another.

What if the Chinese Communist Party is not trying to influence anyone, but simply signalling its intent and warning of the consequences of failure to comply? That is how the party works in China. Is this what it has been doing in Australia all along?

The official consular warnings broadcast over and again on Chinese community radio in December and repeated in February by the Ministry of Education were not influence operations. They were warnings akin to tsunami alerts, in this case signalling a wave of retribution that could overwhelm Australia's education sector if governments and communities fail to comply with Beijing's wishes on other matters. These are acts of intimidation.

The methods employed on this occasion also raise further concerns. The consular warning that went out over Chinese government-owned community media in Australia were supplemented on local social media platforms tied to Beijing. Popular Chinese-language digital news services including Queensland Today and Melbourne Today carried stories about the children of students who had come to study committing suicide in despair when they found they could not fit in to Australian society, and about duty-free stores in Australia singling out tourists from China to diddle them. At the very time the embassy and consulates started issuing warnings, Australian service industries were coming in for a hiding on Chinese-language community media and local social media platforms tied to Beijing, here in Australia, for consumption by local readers and many in China.

The combination of official warnings and popular bad-news stories on Australia's Beijing-friendly media offers a timely reminder of the tools the Chinese government can deploy to launch a Chinese consumer boycott of Australian education, or do harm to Australian social cohesion, should it wish to do so. It does not need to lift a finger in China. Chinese authorities need only signal to their Australia-based consular services and PRC-friendly media platforms in Australia that it is game on, and it could well be game over for those affected, in this case Australian universities and regional communities dependent on international education for their wellbeing.

Hosting Communist Party agitprop operations in our backyard offers a foretaste of life with China. Beijing has the capacity and the intent to target social media readers and online audiences in China from within its Australia-based media operations for strategic purposes.

It will need to be careful. Australian export industries are certainly vulnerable to concerted efforts by Beijing to mobilise its capacity in Australia and China to influence Chinese consumer choices. These efforts could also backfire. If parents chose to ignore orchestrated Education Ministry and consular warnings about "anti-Chinese racism" in Australia, and boycott Beijing's education boycott, there could be no clearer indication of popular middle-class resistance to the excessive agitprop and authoritarian mercantilism that mark Xi Jinping's term in office.

Whoever wins the grand strategic game in our region, Australia counts for very little in anyone else's strategy. We are on our own. The first lesson on living with China in a world without America is that China is all about China and not at all about us.

Written by Professor John Fitzgerald, Swinburne University of Technology. This article was originally published in the Australian Financial Review. Read the original article.