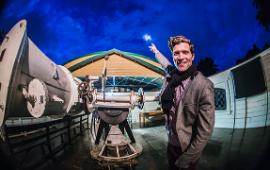 Swinburne Associate Professor Alan Duffy has been appointed Lead Scientist at Australia’s Science Channel, in addition to his existing role at Swinburne.

Australia’s Science Channel CEO Bradley Abraham says the Lead Scientist role was developed as part of a new structure for the organisation.

“We searched nationally for the right person to act as a national presence for Australia’s Science Channel, promoting the organisation and acting as a leading scientist for the team,” Mr Abraham says.

“Alan brings with him an outstanding scientific credential with solid research and teaching base. The quality of Alan’s communications and his ability to explain even the most complex science was a stand-out.

“We look forward to welcoming Alan to the team.”

“Crucially for me in this joint appointment was ensuring I had the resources to continue my astronomy research and physics lectures at Swinburne."

Associate Professor Duffy says he is excited to work with Australia’s Science Channel and share his passion for science with the widest audience possible.

“Australia, and the world, faces significant challenges ahead but it will be more science and technology not less that will see us through. That’s why it’s so critical we continue to explain and share the latest breakthroughs by Australia’s researchers and inspire the next generation into STEM.

“At Australia’s Science Channel we can ensure the best and most inspiring science stories are fed directly into classrooms around the nation, and further shared around the world,” Associate Professor Duffy says.

“Crucially for me in this joint appointment was ensuring I had the resources to continue my astronomy research and physics lectures at Swinburne.

“The scientific insights from Swinburne, combined with the national reach of Australia’s Science Channel, will be an exciting opportunity for both organisations.”

Australia's Science Channel is operated and developed by The Royal Institution of Australia.