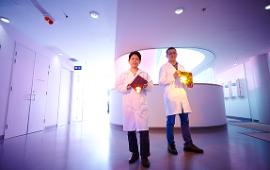 The BEST supercapacitor has an improved ability to quickly charge and discharge energy, and it can store signiﬁcant power for longer.

The technology could, according to one investor, make chemical batteries a thing of the past.

“The battery is very thin, it’s carbon based and it’s environmentally friendly,” Professor Jia says. “We ﬁled a patent on the technology last year.”

The technology is on the brink of becoming a commercial prototype.

Investment in its development will soon be under way through Graphene Solutions, a joint venture between graphite miner First Graphite Resources (FGR) and Melbourne electronics company Kremford Pty Ltd.

The seeds of the BEST project were sown in 2015, with a $375,000 Australian Research Council Discovery Project grant for direct laser printing of thin ﬁlms of activated graphene oxide. Graphene material is very porous, which gives it a hugely increased surface area on which to store electrical charge. The project aims to create a supercapacitor that could more efficiently collect, store and discharge the energy collected by solar cells.

“Our centre has a history of making very good solar cells,” Dr Lin says. “But there’s a challenge in storing the energy generated from them. Sunshine changes all the time, depending on the weather, and that makes the current and voltage unstable. That’s no good for batteries.”

Existing batteries generally can’t store all the energy that a solar cell generates, so a proportion is wasted. The batteries have to be extremely large to store sufficient energy, and they can be damaged by ﬂuctuations in the amount of sunlight being converted. They also have a limited lifetime, reduced by a cycle of charging during the daytime and discharging at night.

Chemical batteries, invented more than 200 years ago, are toxic to the environment. The chemicals degrade as they are used, producing spent, un-rechargeable batteries as waste products. Modern uses require batteries that charge and discharge quickly, too.

The BEST supercapacitor has an improved ability to quickly charge and discharge energy, and it can store signiﬁcant power for longer. It’s safer than current battery technology, as it is able to function without overheating or resulting in explosions or ﬁres. The porous graphene surface stores charged atoms (ions) and moves them from one electrode to another.

“In this process, no ions are being generated or being killed,” Dr Lin says. “They are maintained by charge and discharge, and are just moved around. Moving ions doesn’t degrade the supercapacitor, so it can charge millions of times, in theory. Usually, a supercapacitor can work for at least 10,000 life-cycles.”

That “in theory” is important. The efficacy of graphene oxide has been proven in the laboratory.

Making a commercial prototype is the next step.

Kieran Harford, of Kremford Pty Ltd, thinks that step is very close. “We’re pretty sure we can handmake a prototype within eight weeks,” Mr Harford says. “But we need to be able to make it commercially.”

On completion of the project, Kremford will own 40 per cent of Graphene Solutions; FGR will own the other 60 per cent.

“Warwick Grigor of Far East Capital has just raised $3.5 million for FGR, $2 million of which is earmarked for this project,” Mr Harford says. “We’ll be working with Baohua to make the prototype over a two-year period.”

FGR issued a media release in March advising that due diligence on the BEST battery project had been completed on the science and facilities. Licence and co-operation agreements were signed at the end of May.

Kremford’s electronics expertise will be key to the project. “Kremford has some ideas how to automate the process. It’s early days yet, but we believe we can set up world-class manufacturing plants in Australia rather than off shore,” Mr Harford says.

Further investment will be needed a few years down the track, but Mr Harford says battery and storage device businesses, or electronics and related industries, will be keen to get on board.

“A lot of people in the market are trying to do what we’re doing. What’s given us the advantage is Professor Jia and Dr Lin’s innovations. If it comes out the way we’re planning, we could get rid of chemical batteries from the environment. It’s phenomenal.”