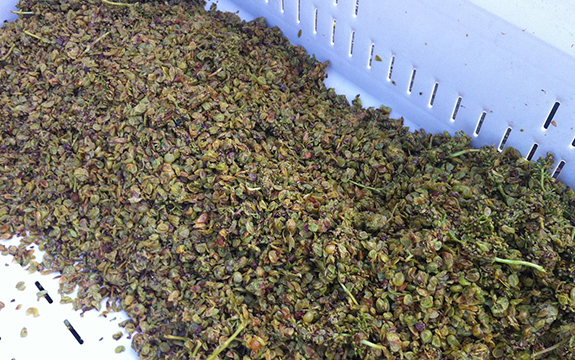 Pomace left over from grapes after pressing

Ways to recycle the vast amount of plant waste produced by the wine industry are under investigation by chemistry and biotechnology researchers at Swinburne.

Grape pomace is the skins, pulp, seeds and stems remaining after the fruit has been pressed for juice. While pomace contains tartaric acid, a common additive used to balance the acidity of the wine, it is of limited nutrient value. It is also too hard for animals to digest so can’t be used as feed, and degrades too slowly to be useful as compost. Given the size of Australia’s wine industry, a lot of plant waste ends up in landfill.

Swinburne researchers, led by Professor Enzo Palombo, chair of the department of chemistry and biotechnology, are collaborating with the CSIRO to find a solution and have developed a technique for converting the waste into compounds with potential value as biofuels or medicines.

Four fungi are used in the process — Trichoderma harzianum, Aspergillus niger, Penicillium chrysogenum and Penicillium citrinum. A 30-minute heat-activated pre-treatment breaks down the biomolecules. Then, a bioreactor containing the fungal blend takes up to three weeks to break down the biomass.

The breakdown produces alcohols, acids and simple sugars with industrial and medicinal applications. Among the extracts is tartaric acid, which can be reused in the winemaking process.

“We have demonstrated this technique in the laboratory, but it can be scaled up to an industrial level,” says Palombo.

“Our newer modified process involves a simplified and rapid extraction method that can be performed on-site, thus recycling the waste directly back into the winemaking process,” he says.

Since tartaric acid is one of the biggest costs to winemakers, its effective extraction for reuse reduces their costs significantly. The residual post-process biomass has reduced toxicity and can be safely composted or used as animal feed.

Southern Estate Wines will be working with Swinburne on further research to better understand the fungal-based conversion process, which the group hopes will result in sustainable, efficient, novel and economical methods of grape pomace degradation and bioconversion.

Swinburne will extend this work to other agricultural industries. There’s already interest in applying the new method to treating large amounts of toxic citrus waste and creating innovative ways to reduce and recycle wastewater.

The agricultural, food, paper, textile and related industries produce abundant plant-based waste. But because not all biomass waste is easily biodegradable for compost or suitable for biofuels or animal feed, biodegradation is a key research focus.

Sustainability Science
Turning wine industry waste into premium products
Reducing our carbon footprint in a 100 per cent renewable electricity deal
Global database for water-use efficiency compiled from tree-ring data
Students in China heed their government’s warnings against studying in Australia – less than half plan to come back
Curious Kids: what does the Sun’s core look like?
Vale Dr Jean McLeod
Environment and Sustainability
Science