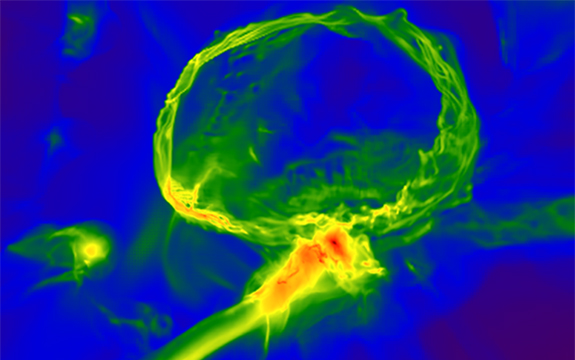 Image: A simulation of the first stars in the Universe, showing how the gas cloud might have become enriched with heavy elements.

Researchers from Australia and the USA have discovered a distant, ancient cloud of gas that may contain the signature of the very first stars that formed in the Universe.

The gas cloud has an extremely small percentage of heavy elements, such as carbon, oxygen and iron – less than one thousandth the fraction observed in the Sun.

It is many billions of light years away from Earth, and is observed as it was just 1.8 billion years after the Big Bang. The observations were made by the Very Large Telescope in Chile.

“Heavy elements weren't manufactured during the Big Bang, they were made later by stars,” says lead researcher, Dr Neil Crighton, from Swinburne University of Technology’s Centre for Astrophysics and Supercomputing.

“The first stars were made from completely pristine gas, and astronomers think they formed quite differently from stars today.”

The researchers say that soon after forming, these first stars – also known as Population III stars – exploded in powerful supernovae, spreading their heavy elements into surrounding pristine clouds of gas. Those clouds then carry a chemical record of the first stars and their deaths, and this record can be read like a fingerprint.

“Previous gas clouds found by astronomers show a higher enrichment level of heavy elements, so they were probably polluted by more recent generations of stars, obscuring any signature from the first stars,” Dr Crighton says.

“This is the first cloud to show the tiny heavy element fraction expected for a cloud enriched only by the first stars,” co-author Swinburne’s Professor Michael Murphy says.

The researchers hope to find more of these systems, where they can measure the ratios of several different kinds of elements.

“We can measure the ratio of two elements in this cloud - carbon and silicon. But the value of that ratio doesn't conclusively show that it was enriched by the first stars; later enrichment by older generations of stars is also possible,” another co-author, Professor John O’Meara from Saint Michael’s College in Vermont, USA, says.

“By finding new clouds where we can detect more elements, we will be able to test for the unique pattern of abundances we expect for enrichment by the first stars.”

The research was undertaken by Dr Neil Crighton and Professor Michael Murphy from Swinburne University of Technology in Melbourne, Australia, and Associate Professor John O’Meara from Saint Michael’s College in Colchester, Vermont, USA.

Professor O'Meara will present the results at the American Astronomical Society meeting on 8 January 2016.

The paper will be published in the Monthly Notices of the Royal Astronomical Society Letters on 13 Jan 2016, and is available as a pre-print at http://arxiv.org/pdf/1512.00477v1.

The image above shows one of the first stars exploding, producing an expanding shell of gas (top) which enriches a nearby cloud, embedded inside a larger gas filament (centre).  The image scale is 3,000 light years across, and the colourmap represents gas density, with red indicating higher density. Image credit: Britton Smith, John Wise, Brian O'Shea, Michael Norman, and Sadegh Khochfar