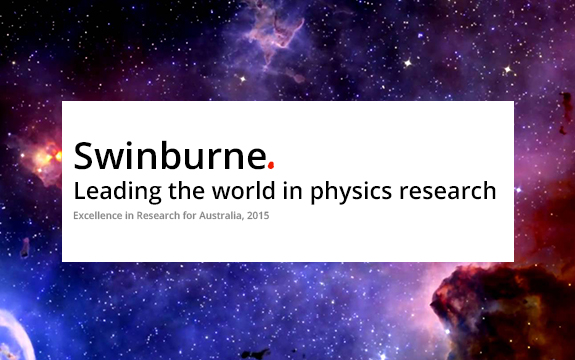 Swinburne's ranked in the top 100 in the field of Physics, by the prestigious Academic Ranking of World Universities.

This demonstrates an excellent return on research investment for both infrastructure and people in science at Swinburne.

Swinburne’s reputation for high impact research in physics is confirmed in the Excellence in Research for Australia (ERA) 2015 ratings.

Swinburne was awarded an ERA 5 rating, the highest possible ranking of ‘well above world standard’, in the following areas of physics:

“It is fantastic to see science at Swinburne recognised for its excellence in research in today’s ERA 2015 rankings,” says Swinburne Dean of Science, Professor Sarah Maddison.

“This demonstrates an excellent return on research investment for both infrastructure and people in science at Swinburne. Our outstanding researchers are working on both fundamental and applied research problems that drive technology and innovation needed for economic growth.”

Earlier this year Swinburne’s Professor Matthew Bailes was awarded a prestigious Australian Laureate Fellowship, by the federal government to transform the Molonglo Radio telescope, located near Canberra, into a machine that will attempt to count the number of atoms in the Universe. Professor Bailes’ team is a world leader in advanced radio astronomy instrumentation.

The recognition of Swinburne’s rapid rise in ERA 2015 adds to Swinburne’s significant achievements this year: