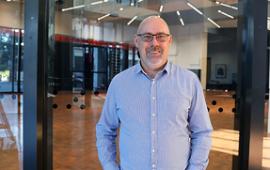 Swinburne Centre for Human Psychopharmacology PhD candidate, Greg Kennedy, has been recognised for his contribution to the advancement of Alzheimer’s Disease research.

Swinburne PhD candidate Greg Kennedy is the recipient of the 2018 Alzheimer Award, presented by the Journal of Alzheimer’s Disease (JAD).

The award recognises Mr Kennedy and colleagues' examination of potential pathways via which exercise may maintain or improve cognitive functioning, in the context of the aging brain.

Each year, JAD's Associate Editors select an article from the previous year's volumes that has had a significant impact on the advancement of Alzheimer’s Disease research.

Mr Kennedy was presented with the Alzheimer Medal, a bronze medal with the likeness of Alois Alzheimer at a ceremony in Chicago on 22 July.

"I would like to acknowledge my amazing co-authors and co-investigators, whose hard work, guidance and dedication have helped shed light on the promising link between exercise and the tempering of cognitive decline,” Mr Kennedy says.

“I would also like to thank the JAD editorial team for selecting our paper from among the hundreds of excellent articles published by the journal in 2017.”

The search for interventions to slow cognitive decline

Mr Kennedy and colleagues examined pathways via which exercise may maintain or improve cognitive functioning during senescence – the process by which cells irreversibly stop dividing and enter a state of permanent growth arrest without undergoing cell death.

"A greater understanding of these mechanisms and their relationships with exercise and cognition may provide potential biomarkers for investigating the effectiveness of different exercise regimes on cognitive outcomes," Mr Kennedy says.

To this end, he and his colleagues have implemented the Lifestyle Intervention in Independent Living Aged Care (LIILAC) study, a clinical trial of exercise and dietary interventions on cognition in people residing in independent living accommodation communities.

“Because severe cognitive decline and dementia are the primary reasons for moving from independent living to an aged care facility, it is important to see what lifestyle interventions can be implemented that have the potential to slow this decline,” Mr Kennedy says.

“This would have significant social and economic benefits for both the individual and society as a whole.”

Editor-in-Chief of the JAD, Dr George Perry, says he and the Associate Editors are delighted to formally recognise this exceptional work.

“This study, and future research in the area, will help to elucidate the complexity of the interactions involved in exercise-based amelioration of age-related cognitive decline and contribute to the evidence base for the potential use of exercise as an effective intervention strategy.”

Mr Kennedy’s paper “How Does Exercise Reduce the Rate of Age-Associated Cognitive Decline? A Review of Potential Mechanisms” (2017) is freely available to read, download, and share.