What happens next for journalists when they leave newsrooms 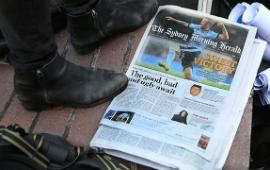 With every round of redundancies, significant questions arise around the long-term viability of news media in Australia

The planned 125 editorial job redundancies at Fairfax Media is a huge blow to those working within some of Australia’s most established newsrooms, to their readers, and to the capacity of established media to operate as a site of public engagement.

The proposed cuts prompted a seven-day strike by staff at the Sydney Morning Herald, The Age, and the Australian Financial Review, which between them face a reduction of 25% of all editorial staff. The announcement of these redundancies is just the latest in a protracted series of job cuts in Australian newsrooms since 2012.

But what comes next for those whose who will be leaving?

Our New Beats research team has been following the experiences of 225 news workers whose positions were made redundant between 2012 and 2014 to see how their post-redundancy careers evolved. Findings from our annual surveys of this group point to some common concerns – including how redundancy affects health, income, and the gaining of new skills.

Redundancy is frequently a traumatic experience, even for those who go voluntarily. As one journo told us:

It was voluntary, but in the same way as getting on a lifeboat from the Titanic also would be voluntary.

Some reported loss of professional identity and self-esteem, while others said their health had suffered.

A lack of transparency and poor management of the process has added to the stress. There were horror tales of journalists who had spent decades in a newsroom being told to pack up and leave immediately.

Union intervention and advocacy has secured fairer outcomes and decent payouts. But there is lingering anger that redundancy has become the least-worst option: that journalistic expertise and experience seem to have become disposable assets in converging digital newsrooms.

While the negative impacts cannot be downplayed, many of the participants in our research have rebuilt their careers and lives since redundancy. When we asked about wellbeing in 2014, the responses were downcast. But by 2015, at least some were more upbeat – characterised by responses like this:

Redundancy was a hard time, but things have looked on the up since then. My job is much more secure than it ever was in a newspaper.

In 2016, those responses were mostly positive again. As one respondent put it:

I feel better and work is more satisfying but I am financially worse off and less stable.

The “happier but poorer” refrain is a common theme. Findings from our 2014 survey, when some participants had left their jobs in the previous 12 months, revealed a substantial drop in income – even for those who were working full time. And reduced earnings were more pronounced for those in full-time journalism roles than for those who had moved into other professions.

However, subsequent survey responses have noted some income and employment recovery.

In the past two surveys, a majority of respondents said they had earned more in the current year than in the previous one. Of the 123 who completed the survey conducted in late 2016, only one said they were looking for work. Eleven were retired and two were “taking a break” – leaving 109 in work.

Nevertheless, the extent of this recovery should not be overstated. Many have moved from full-time work to “precarious” or insecure work, including contract and freelance roles, although 70% of respondents working in this way said that they did this by choice for flexibility.

Most still work in journalism, or a combination of journalism and other work.

While a smaller proportion of our cohort, some have found employment in non-journalism roles that draw heavily on their journalism skills. These include media advisers for politicians, public relations and other communication roles, and as university lecturers.

Of these, many commented that their skill set – in particular critical thinking, research and high-level communication skills – were valued outside journalism. Several respondents now in PR noted that their new roles, long stigmatised by many journalists as “the dark side”, had provided both solid income and job satisfaction. One commented:

My career change has rounded out my professional identity and added another string to my bow. There may be a perception among journalists that I’ve “sold out” and given away my credibility. That was my perception of PR before I joined the profession!

What the job cuts mean

The total number of jobs lost through redundancy from the Australian journalism workforce is difficult to calculate. Many positions disappear without announcement – especially from smaller news outlets.

Two years ago it was estimated that 2,500 roles had disappeared during or since 2012. If so, it now seems that 3,000 is a conservative estimate, given recent deep cuts in the staffing of regional newspapers, and last month’s announcements of a restructure at News Corp.

Our own attempt to keep track of redundancies on the timeline shown below is regularly updated. Please advise us of details of any job losses we have missed.

Whatever the actual figure, the extent of the latest cuts raises questions about whether those who leave, voluntarily or not, will have comparable post-redundancy experiences.

While freelancing has been an important part of work portfolios in recent years, the slashing of casual and contributor budgets at Fairfax Media points to a reduction in even this form of precarious work. This is significant because some of our respondents had already noted the low rates they were offered for work.

And with every round of redundancies, important questions arise around the long-term viability of mainstream news media in Australia. Those who remain in newsrooms still have to produce news with a much-reduced workforce, in a context in which management is using ongoing redundancies to reduce costs.