Listening like a life depends on it
Research Impact

The trouble, as Richard Osborne sees it, is that too often initiatives designed to address diseases fail, because they overlook one crucial factor: real people. The usual pattern, says the professor of health sciences at Swinburne, is that funding agencies finance studies in good faith, and scientists develop treatments that work in the lab and in clinical trials. But problems emerge when you try to tell people which vaccinations to take, what exercises to perform, which hygiene practices to employ, what to eat, what bad habits to avoid, and so on. It could be that the right people don’t hear the advice, or choose to ignore calls to change. He’s aware that his public criticisms of traditional health programs may annoy. “This is blasphemy,” he points out. But if the public doesn’t engage with health interventions, these are sometimes brought to an abrupt end. “Every year we spend billions of dollars on failed programs that come and go,” says Osborne. “That’s a waste of taxpayers’ money.”

Osborne argues that it’s usually the most vulnerable who slip through the system; those living in poverty, minorities who don’t speak the prevailing language, or disabled people, for example. So, he has pioneered a method for canvassing ordinary people about their health needs — one that involves them in designing solutions using questionnaires, workshops, feedback and evaluation.

His ‘Ophelia (OPtimise HEalth LIteracy and Access) process’ has been taken up by the World Health Organisation (WHO) through the National Health Literacy Demonstration Projects (NHLDP), part of a global strategy tackling lifestyle-driven diseases, one of the world’s leading causes of death. The NHLDPs are designed to demonstrate how to go about addressing health literacy, with the hope that the solutions can later be scaled up. Osborne’s basic advice: “Listen to people like your life depends on it.”

Osborne grew up on a small dairy farm in North Central Victoria. He didn’t realise it at the time, but he was severely dyslexic and as a result, he hated school. Nonetheless he was inspired to study science by a family friend and scientist, who kept asking him probing questions about nature. “I always knew I wanted to help people, and science would be a good way,” he says.

It was his doctorate, which he earned in 1991, that would transform his thinking. His thesis looked at factors in breast cancer survival, a complex tangle of genetics, psychology, and behaviour. During post-doctoral work he surveyed patients, and was struck by how bad the standardised questionnaire was. Women were routinely confused and Osborne admitted that even he couldn’t understand some questions. Many used medical jargon. Others bundled multiple vague ideas together; a typical question might ask: “How confident are you that you can keep the emotional distress caused by your disease from interfering with the things you want to do?” Since the women weren’t clear about what they were answering, such surveys yielded little. “Asking such vulnerable people questions they couldn’t understand seemed cruel, unethical, and immoral,” says Osborne.

Thinking back to his childhood schooling struggles, Osborne vowed to ask straight out: “What would help you?” People immediately opened up and offered meaningful and honest answers. Since then, Osborne has developed the Ophelia process, a structure through which researchers and participants jointly design health solutions. The explicit aim of Ophelia is to listen to those who are usually ignored, due to race, gender, poverty, disability, or other issues. “Health education programs en masse mainly catered for worried white people, Mr and Mrs Average, not the disempowered,” says Osborne. 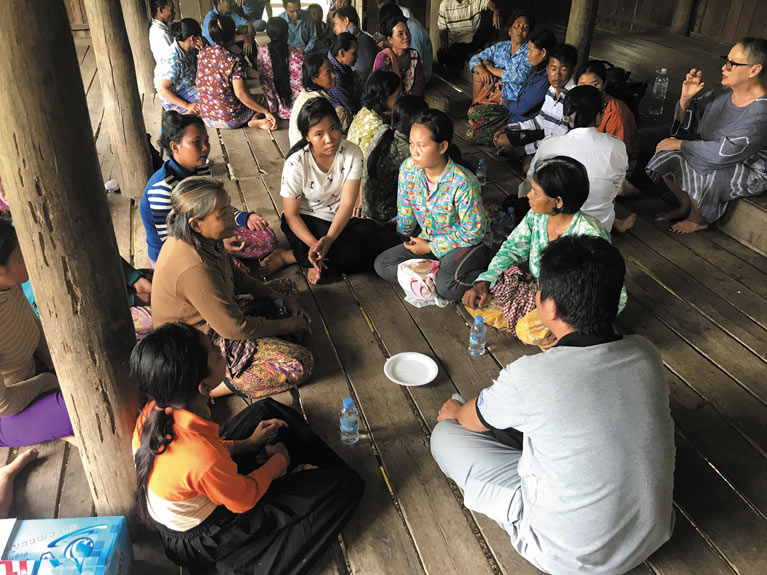 Above: In Cambodia, the government has had a tough time promoting good hygiene practices despite outbreaks of swine and avian flu in rural areas. The outcome of work by the Cambodian Ministry of Health with the OPtimise HEalth LIteracy and Access (Ophelia) process has been to give information to respected village elders and vets, and to set up regular village meetings in which farmers share knowledge.

The Ophelia process begins with one-on-one interviews with people about their needs. These are followed up with workshops, bringing those people, and often their carers, doctors and sometimes relevant government representatives, together in groups for brainstorming. Ideas are gathered and the participants group them as they see fit. Discussion leaders then organise the ideas using concept-mapping software, which allows participants to visualise the options and how they may be connected. This could involve helping healthcare practitioners or local authorities find solutions aimed at them, while categorising advice for community groups separately.

Participants can react emotionally. Osborne recounts a man suffering from back pain who drove three hours to attend a workshop in Melbourne and cried during the session. “He felt that this was the first time his experiences and opinions had been taken seriously,” says Osborne. Diversity is a strength of these working groups. Osborne recalls one held in the north of England that brought a young Muslim woman together with an ex-army officer, to drum up ideas for dealing with pain management for chronic diseases. “They were so inspired and wanted to be actively involved in implementing the solution, that they actually became angry that they hadn’t been asked already,” he says.

Ophelia’s most resounding success to date has been to encourage more women from minority groups in Victoria, Australia, to attend routine mammogram scans. Staff at BreastScreen Victoria (BSV) had noticed that indigenous, Arabic-speaking, and Italian-speaking women tended to ignore letters calling them in. A major issue was that the entire program was in English, says Mel Davis, BSV’s health promotion manager. Through a series of workshops, women from these communities generated almost 250 possible solutions. One that was implemented involved hiring bilingual staff to call women directly; as a result, screening attendance went up tenfold. Just having that personal touch and giving women the chance to talk through their worries made a huge difference, says Davis. “When someone makes that extra effort to reach out, you feel that you, your health and your well-being are considered important.” BSV has expanded the program to include Mandarin and Greek, and is sharing the strategy with other states in Australia.

Women from the Aboriginal community also described their unease about being undressed during the screenings. So the women identified a strategy that had proven successful in New Zealand: inviting artists from the indigenous community to create a traditional shawl for draping over the participant. Women welcomed the move, telling staff they felt “comfortable”, “secure”, “beautiful” and “proud of who I am”.

Ophelia’s philosophy is backed by the WHO, which now funds Osborne to run masterclasses around the world. In Egypt, for example, his group and a team at Ain Shams University in Cairo are supporting a large fishing community, which lives and works on a polluted lake (see box, at left). Swinburne has licensed its Health Literacy Questionnaire (HLQ) to help build health literacy profiles for groups within the com-munity to help identify and target relevant solutions.

Osborne has another Australian government-supported project underway in Cambodia. Many families in poor rural areas live very closely with animals, sometimes eating an animal that gets sick. This is where major global health threats, such as swine flu, can start. Chhea Chhordaphea, a medical doctor and researcher working for the Cambodian Ministry of Health, says that the government has had a tough time promoting good hygiene practices because farmers either distrust or forget information. The key has been to feed information to respected village elders and vets, and to set up regular village meetings in which farmers share knowledge. “This is the way to keep knowledge alive, instead of being quickly forgotten,” says Chhordaphea.

Osborne’s plans for the future involve sharing Ophelia more widely, by creating videos and online manuals. He was excited to join Swinburne, in March 2019, because it is an “uber technology university with global reach,” and is thus the ideal place to work on digitalising the process. If Ophelia is cloud-based, it could be useful everywhere, says Osborne, from the “hill tribe, to Manhattan”. It will also save organisations from repeating the mistakes that Ophelia seeks to eradicate. It’s not just a case of saving them from re-inventing the wheel, says Osborne, laughing, but preventing them from “re-inventing the flat tyre”.