Alumnus Nick Kozakis (centre) is the director behind the video for hit song, ‘Dance Monkey’.

When Nick Kozakis agreed to direct the music video for ‘Dance Monkey’ by Australian singer-songwriter Tones and I, he had no idea it would be one of the most popular, if not the most popular, song of the year.

Since its release in May 2019, ‘Dance Monkey’ has reached number one in 30 countries, including the United Kingdom, Germany, Switzerland, Belgium, Norway, The Netherlands, New Zealand and, of course, Australia - where it has spent a record-breaking 22 weeks and counting at number one in the ARIA Singles Chart. The song is also steadily climbing the US Billboard Hot 100 Chart and is a favourite to top the 2019 Triple J Hottest 100 on 25 January.

Nick admits his involvement in the music video, which has more than 480 million views on YouTube and was nominated for the ARIA Award for Best Video, was purely by chance.

“Tones’ manager, Jackson Walkden-Brown, needed to get the music video out quickly and WOWFX, the makeup team we often work with and who transformed Tones’ into an elderly man for the video, linked us up,” says Nick.

“It was always Tones’ vision to dress up as an elderly man and cause trouble with her friends on a golf course, but we were able to develop the concept further.”

Despite a short turnaround and only one day to shoot, Nick says making the music video was a great experience.

“We worked with an incredible team, not to mention the awesome energy of Tones, who lifted everyone’s spirit on the day,” he says.

Nick has since worked on a second music video with Tones and I for ‘Never Seen the Rain’. 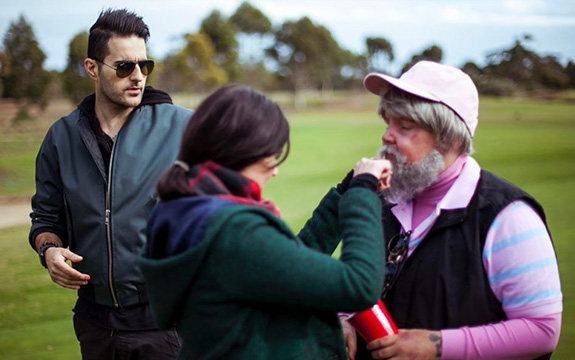 ‌Nick came to direct the music video after he was connected with Tones and I's manager by the same makeup team who transformed Tones and I into an eldery man.

The road to filmmaking

Nick always loved film, but becoming a filmmaker seemed impossible to him.

He started as a graphic designer, but his desire to make films would not disappear, and he decided to return to study.

Nick has worked on a variety of projects, from music videos to commercials, and long-form content for broadcast and online. ‌Nick runs his own production company and has worked on a variety of projects.

Aside from ‘Dance Monkey’, the project he is most proud of is his first, feature-length film, Plague.

“The film was more of an experiment to see how far we could go,” says Nick. “Never did we expect that it would screen in the Marché du Film at the Cannes Film Festival.”

“It was even more exciting when it landed on Netflix in the US.”

He recently directed the pilot for a new series, Interface, which has been greenlighted for production early this year. He is also working on another series, Help, and two feature films, including one based on a harrowing true story.

“Balancing it all will be an exciting challenge and I can’t wait to get started,” says Nick.

Reflecting on his journey, Nick’s advice to other aspiring filmmakers is simple: never give up.

“I know it’s a cliché, but I’ve had so many setbacks, and while I’ve often entertained the idea of quitting, I’ve always pushed through,” he says.

“There were better filmmakers than me while studying who did not get the work they wanted, so they pivoted to a completely unrelated field, whereas I persisted and the opportunities presented themselves.”

“If I quit, I would probably be stuck in a different job forever questioning if I made the right choice.”

“So, never give up – what you want is often just around the corner.”