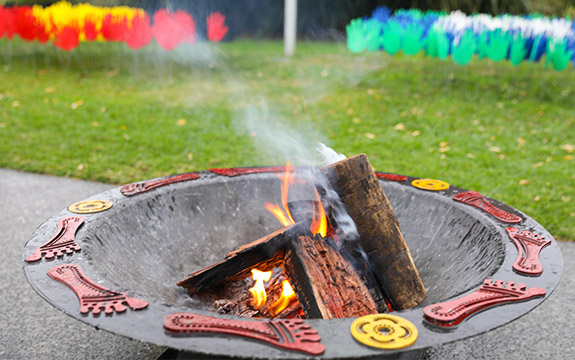 Swinburne joins thousands of Australians – individuals, communities and organisations – who are calling for Aboriginal and Torres Strait Islanders to be heard at the highest levels.

Swinburne University of Technology today stands united with 13 of Australia’s leading organisations in declaring its support for the Uluru Statement from the Heart.

Swinburne joins thousands of Australians – individuals, communities and organisations – who have joined the call for Aboriginal and Torres Strait Islanders to be heard at the highest levels.

The Uluru Statement from the Heart supports First Nations peoples to have a voice in federal parliament, paving the way for reconciliation and understanding between Indigenous and non-Indigenous Australians.

Swinburne Vice-Chancellor and President, Professor Linda Kristjanson AO, says the university has a responsibility to support Indigenous leaders and communities.

“Swinburne is committed to the reconciliation process and supports Aboriginal and Torres Strait Islander peoples in their call for an Indigenous voice in federal parliament,” says Professor Kristjanson.

“We support First Nations peoples’ rights and for their unique experience and knowledge to be reflected in policies and programs that govern and determine their futures.

“As a university, we are driven to pursue innovation, seek understanding and share knowledge with others. We are humbled by this responsibility and the impact we have on students’ lives – Indigenous and non-Indigenous alike.

We are shaping the future together. We are stronger together. And we stand with Australia’s Indigenous community.”

Collective response to the Uluru Statement from the Heart

We represent 14 diverse organisations across a range of sectors including, academia, aviation, construction, energy, engineering, insurance, legal, professional services, sport and resources. Collectively we educate, employ and provide services to people across all of Australia. Together, we make this response to the Uluru Statement from the Heart:

Thank you for your invitation to walk with you in a movement of all Australian people for a better future.

We recognise the Uluru Statement from the Heart as an historic mandate to create a fuller expression of Australia’s nationhood.

We hear your call for a Makarrata Commission to supervise a process of agreement-making between governments and First Nations and truth-telling about our history.

In a spirit of reconciliation, we look forward to working with and supporting you, as a matter of national priority, to develop and enact specific proposals in relation to Voice, Treaty and Truth."

With an elevate Reconciliation Action Plan (RAP) now well entrenched, Swinburne is proud to have worked with Reconciliation Australia and other organisations in consultation with Aboriginal and Torres Strait Islander leaders.

“Swinburne is committed to reconciliation, including the acknowledgement of history, the recognition of Aboriginal and Torres Strait Islander rights, such as self-determination, and the provision of reparative justice.

About reconciliation at Swinburne

The university has implemented a number of measures to support reconciliation both within the organisation and in the broader community, and in 2018 established the Moondani Toombadool Centre as a central body of knowledge and support on Indigenous matters.