Forged by the sun 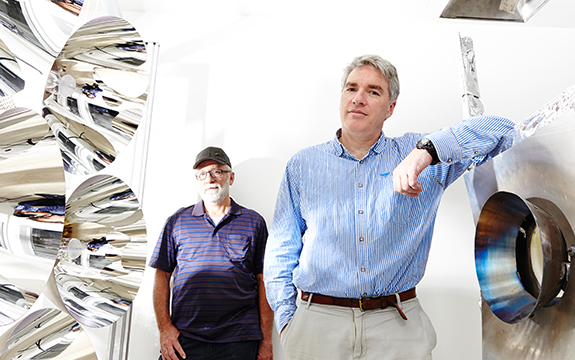 Geoffrey Brooks and Ben Ekman foresee a day when Australian iron ore mined in Western Australia will be processed using the sun’s rays, benefiting the Australian environment and the economy.

The sun’s energy may soon be used to cut the cost and boost the sustainability of global iron processing, thanks to breakthrough engineering work at Swinburne.

Researchers around the world have been trying to engineer a way to use solar power to smelt iron ore for more than 30 years but a commercially viable method has been elusive.

By incorporating two important changes to the conventional approaches to solar smelting, Swinburne metallurgical engineers Professor Geoff Brooks and Dr Ben Ekman have created an early-stage model that is sparking industry interest and may cut the carbon footprint in iron production by up to 30 per cent.

“We see the potential to dramatically lower the carbon usage,” says Brooks. Firstly, the Swinburne team designed a very simple cylindrical reactor to increase efficiency. They plan to use a hybrid power system so that it can function using conventional power when required, ensuring iron-ore processing can continue 24 hours a day.

“Our two major realisations have been the importance of simple effective geometry and the importance of developing a hybrid,” says Brooks. The researchers have recently been able to create iron and prove the concept using a novel solar simulator developed by Ekman (see box). The lab model shows that solar thermal energy is ideal to generate heat of between 1,000 and 1,500 degrees Celsius, required to produce iron from iron ore.

Ekman says commercial heliostats, or mirrored devices, could be used to reflect sunlight directly into the furnace. He says the result would be a furnace that is up to 80 per cent energy efficient. That’s a significant improvement on using steam to generate electricity, which is 10–15 per cent energy efficient. He estimates that 2,000–3,000 mirrors arrayed over 70,000 square metres would be sufficient for a 10 megawatt solar powered reactor.

The conventional blast furnace process for making iron requires up to 450 kilograms of carbon for every tonne of ore being processed — generating around two tonnes of CO2 emissions. As much as 50 per cent of that carbon is used to provide the energy for the reaction, and this figure would be slashed by using solar energy.

In 2015, Ekman and Brooks began working with South Australian company, Cartwheel Resources, to develop a larger model and further refine its practical application. Cartwheel chief executive, Rudy Gomez, has a background in mining and mineral processing and is drawn to the project by his desire to foster sustainable energy initiatives

Gomez, Brooks and Ekman foresee a day when Australian iron ore mined in Western Australia will be processed using the sun’s rays, benefiting the Australian environment and the economy.