Surviving a crisis: what Virgin Australia staff can learn from ex-Ansett workers The experience of ex-Ansett staff after the airline's collapse in 2001 may offer clues on how Virgin Australia employees can cope with the COVID-19 economic crisis they find themselves in today.

As the COVID-19 economic crisis crimps travel and hurts airlines worldwide, Virgin Australia has been placed under external administrators. The Queensland government has put a $200m bid on it (a move derided by several federal ministers) but what’s clear is this is a period of enormous uncertainty for Virgin’s 10,000-strong Australian workforce.

It must feel like déjà vu for former Ansett Airline employees – especially those who went on to work at Virgin Australia (some of whom may still be there now). But the experience of ex-Ansett staff may offer clues on how Virgin employees can cope.

I (Helena Steel) interviewed former Ansett Airlines employees ten years after the airline’s collapse in 2001 (shortly after the September 11 Twin Towers attacks), to see what career changes they had made and what lessons they had learnt.

What I discovered was a workforce much more resilient than expected - and that was often due to the efforts of the ex-employees themselves. 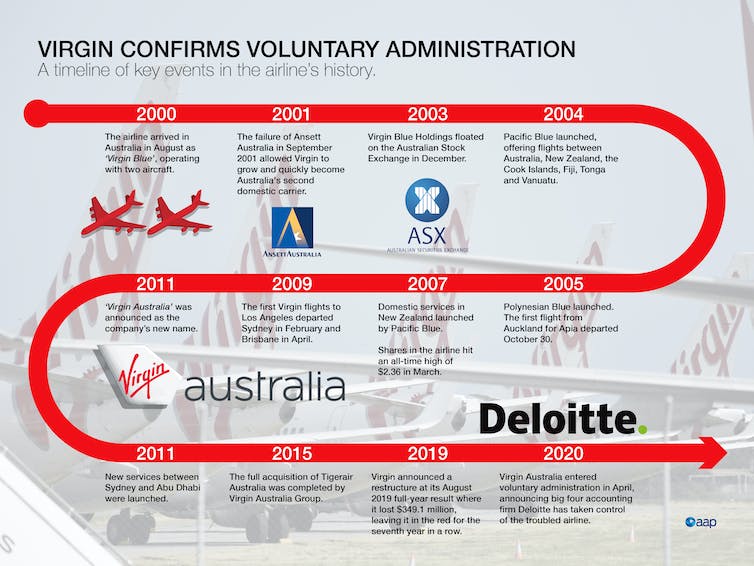 What Ansett employees did next

After its collapse, most Ansett workers had remained in the airline industry and joined the then-growing Virgin Airlines. Fewer received jobs at Qantas, citing a lack of openings.

A small percentage joined overseas airlines or retired. A decade after the collapse, many had opted for a career change outside the airline industry.

It was hard to sell Ansett assets at the time – the September 11 attacks had punctured the airline industry worldwide and few were in the mood for buying planes.

In the end, Ansett was under administration for ten years, making it Australia’s longest and still the largest collapse.

Over 16,000 direct jobs were lost, not including the wider impact on allied jobs. It took ten years for Ansett employees to recoup their entitlements and, in the end, they received 96 cents for every dollar they were owed.

Many of these workers survived this stressful period by helping and supporting each other.

There was an unwritten “hire family” policy at Ansett, with entire families on staff. Loyalty was strong; Ansett employees had on average 15 years service and many reported they loved their jobs. But entire families were left jobless when the collapse occurred.

Nevertheless, this family-oriented approach may also have helped staff survive the crisis.

Under administration, I (Helena Steel) set up an official company staff support and recruitment website but it was soon replaced by self-made employee sites offering information and advice. This shows a high level of collegiality in the workforce and how much staff wanted to help each other through the crisis.

Today, the “Ansett family” has survived, with annual and sometimes monthly get-togethers organised via groups on Facebook and elsewhere online.

Ex-staff have used these informal groups to keep updated on the next redundancy payments, superannuation entitlements, news from Ansett administration and importantly, job referrals and leads.

The current crisis is different - but some lessons still apply

The COVID-19 economic crisis Virgin Australia employees find themselves in today is clearly different to the Ansett collapse in many ways. For starters, the effects are economy-wide, with far greater costs to the public purse and governments don’t seem too keen to bail out Virgin. The ability for ex-staff to find jobs elsewhere in the airline industry is diminished.

That said, Virgin Australia employees can learn a few lessons from former Ansett staff about how to survive, or even thrive.

First, it really helps to know you’re not going through this on your own. The “Ansett family” made ex-staff feel less alone and less likely to blame themselves for their fate. Many said they got some comfort from sharing their redundancy journey with colleagues, and hearing how others made it through and faced challenges along the way.

Second, the “Ansett job loss family” helped remove the stigma many feel when you suddenly lose your job.

Third, being part of networks can help you find new opportunities, stay up to date on entitlements and keep abreast of industry news.

There are already many Facebook groups for Virgin cabin crew, union members, and people with an interest in how the Virgin Australia administration is being handled. Finding an airline “family” in such places may help Virgin employees, potentially for many years.

These social support practices should be encouraged by airline leadership and HR to help foster resilience and survive a crisis.

Business Social Affairs
Don’t blame COVID-19: Target’s decline is part of a deeper trend
Forget work-life balance – it’s all about integration in the age of COVID-19
Nationally recognised teaching program looks to an online future
Eight Swinburne academics in the top 200 computer science scholars in Australia
A lifeline in remote learning for Migrant English Students
Celeste Barber’s story shows us the power of celebrity fundraising … and the importance of reading the fine print
Business and Management