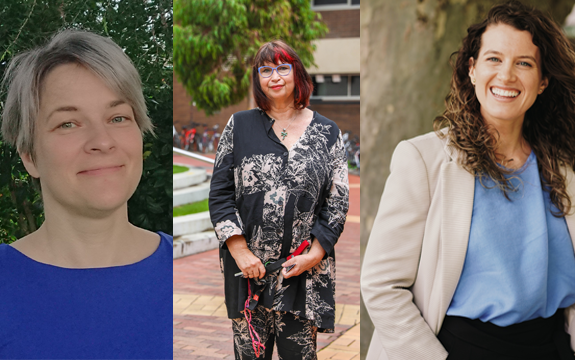 Three Swinburne researchers - including an historian, an industrial ecologist and a clinical and forensic psychologist - have been awarded 2020 Fulbright scholarships.

The prestigious Fulbright Program in Australia funds scholars to undertake further study and research at world-leading institutes and universities in the United States. This program aims to increase research collaboration, exchange of ideas and strengthen relations between both countries.

Anastassija (Stacey) Konash is Senior Manager of Factory of the Future, Swinburne’s research and innovation hub.

The Fulbright scholarship will allow her to investigate how the implementation of circular economy in manufacturing in the United States, particularly in carbon fibre composites industry is enabled by Industry 4.0 technologies.

Industry 4.0 and Circular Economy are umbrella terms that describe new status-quo in automation of manufacturing and industrial sustainability respectively. Together they hold the promise to disrupt current business models and to decouple economic growth from resource consumption.

Ms Konash believes that following in Europe and China’s footsteps of implementing circular economy will help Australians sustain our quality of life with diminishing resources.

Associate Professor of Indigenous Studies and History, Dr Karen Hughes, will be researching  the hidden history of Indigenous Australian women who married American servicemen during the Second World War.

Dr Hughes will be working closely with some of the surviving women and their families to conduct research for a book and an exhibition.

Dr Hughes says that there is an enhanced sense of social and emotional wellbeing for these women and their families in having their lives seen as important in international history.

Unravelling the cycle of violence

Postdoctoral Research Fellow at the Centre for Forensic Behavioural Science, Dr Nina Papalia, will use her scholarship to further her research on understanding and preventing child maltreatment and its adverse consequences.  She will use a comprehensive dataset that involves a large sample of maltreated and non-maltreated children followed since the late 1960s, which is housed at John Jay College of Criminal Justice in New York City.

“My Fulbright project will explore the mechanisms involved in the so-called ‘cycle of violence’, an idea that children who have suffered various forms of abuse and neglect are at an increased risk of perpetrating a range of violent acts themselves,” she explains.

“My hope is that the collaborations I develop through this experience will, over the long-term lead to real and meaningful impact in terms of better preventing and responding to child maltreatment and reducing the damage and derailment it often causes” she adds.