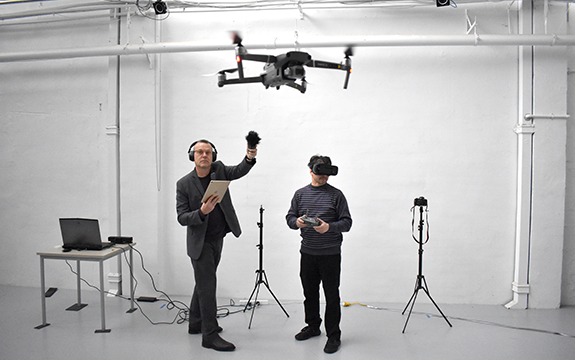 Swinburne’s Dr John McCormick is setting off for Antarctica this week as part of the 2019/20 Australian Antarctic Arts Fellowship.

Dr McCormick, a lecturer in digital media at Swinburne, is travelling to Antarctica with fellow digital artist, Dr Adam Nash of RMIT, on the research and supply vessel (RSV) Aurora Australis.

As the ship undertakes its last voyage to Antarctica, the duo will create a virtual representation of the ship and those who sail on it.

“We’re trying to document that last voyage, put it into a larger historical context, and share that history with the general public,” says Dr McCormick.

Dr McCormick and Dr Nash will use cutting-edge technologies to document the voyage. These include drones, a portable motion capture system, a three dimensional sound recording technique known as ambisonic recording and still and 360 degree video cameras.

They will also use LiDAR scanning, which uses a laser to make a three dimensional representation of an area, to create models of the Aurora Australis and some stations.

These recordings will be joined together into playable artworks for immersive experiences at galleries and festivals, and via mobile, gaming and virtual reality technology.

“We’re really excited to go along with what happens, and try and capture as much as we can to try and give people a sense of the majesty of Antarctica,” says Dr McCormick. 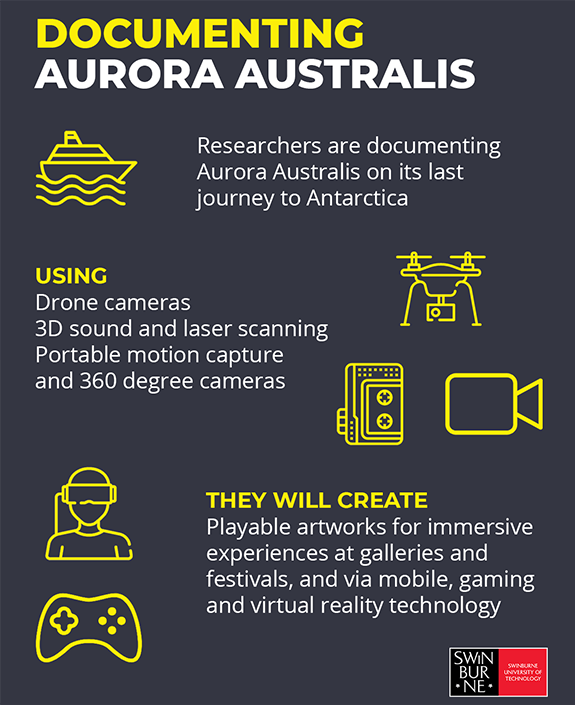 He credits the support of the community for his ability to undertake the voyage.

“We knew we would be lucky to receive the fellowship and the support from Swinburne and the community has been fantastic. Everyone is very excited for us and this amazing opportunity.”

Dr McCormick says he has been thinking about travelling to Antarctica for several decades and knew this would be his opportunity to do so, even though he acknowledges it will be a challenge.

“It’s one of the last frontiers, in a way, and the least spoiled continent on the planet. I’m keen to see it in its pristine state as we don’t know what will happen in the future in regards to climate change,” he says.

“Even though we’re quite protected compared to early explorers, I still see it as a commitment and personal challenge going to an environment like that. To see something on that scale, it’s going to be pretty remarkable.”

The two-month voyage will begin on 21 January depending on weather, and the digital work will be on public display later in 2020.

The project is supported by Swinburne’s Centre for Transformative Media Technologies and RMIT’s School of Architecture.