Being chosen as one of five successful participants from more than 150 candidates speaks to not only my own work and presentation but also the courage of the ABC to take a chance on a relatively niche field of study and practice like autobiographical comics research and practice.

The two weeks spent with RN at ABC’s Ultimo building in central Sydney was packed with information sessions and practical training across a diverse spread of topics, including vocal techniques, audio recording, interview methods and writing for online.

The activities were designed to give us an introduction to the systems of the ABC, and to demystify the practices of media production. Being a residency, there was an expectation of outputs consisting of a radio package, a short social media video, an article for ABC Online and a radio interview with ABC presenter Cassie McCullagh. There were also presentations to staff to clarify exactly who the new people hanging around were, and various iterations of ‘who are you and what do you do’ that you’d expect across the two weeks. 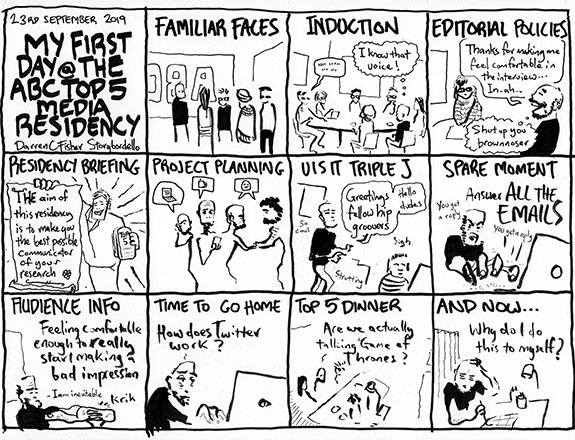 Dr Fisher worked with other Top Five participants who were experts in fields such as Islamic studies and loneliness amongst the elderly. | Image credit: Dr Darren C Fisher

The highlight of the residency was working with my fellow Top Five participants. All were seemingly socially engineered to get along, with a broad spread of aptitudes and areas of study from biblical studies and the Dead Sea Scrolls, to Arabic and Islamic studies, the elderly and loneliness, climate science and water management, to comics about identity and understanding ourselves.  We somehow fit together cohesively despite the spaces between our research fields.

Just being in the space was a thrill. RN is piped throughout the workspaces, and knowing it was being recorded within the same building, live, was an experience in and of itself.

Sitting in on the recording of RN Breakfast from the producer’s booth while news of Trump’s impeachment broke is something I’ll never forget. Interviewing Australian comics legends Pat Grant and Rachel Ang for a  radio package was an honour and a joy. Walking around the building with microphone, headphones and the line ‘I’m with the ABC and can I have a minute of your time’ gave me insight into on-the-ground journalism. There are a host of specific events, and even more experiential micro-moments too numerous to describe here, that helped me to elucidate my research and practice, and made me a better communicator.

One of the most important things I learned from this residency is what I refer to as “the importance of being annoying”. This can be broken down into asking more questions and being comfortable with taking up busy people’s time. This can be more difficult than it seems, particularly in a situation where everybody is referring to you as an expert and a ‘very special person’. Asking for help from experts was something Dr Fisher learned was important during his residency.

Unfortunately, due to the intensive obligations of my mentors and their conflicting schedules I felt a lack of guidance on how to put together the various packages. This resulted in a lack of structure to what I was doing, which ultimately required specific proficiencies outside my experience. Of course, if you don’t ask, you don’t get, and identifying areas that I am struggling with, formulating the right questions for expert input, are things I need to improve on which the residency brought into sharp relief.

Not only in the moment but also ahead of time, pre-checking plans rigorously with mentors and trusted colleagues to define the necessary steps for successful completion will be an asset going forward.

The difficult thing about this is that everyone these days is busy, and it can feel like an imposition to ask for someone’s time. There’s a pressure to be seen as completely in control, positive and excellent at all costs, not only in academia but more broadly, that conflicts with my tendency towards modesty and self-critical understatement. I hope over time to reconcile that mindset from opposition to cohesiveness, where honesty about my limitations can be perceived as an asset, and the strength of my knowledge is derived from familiarity with its boundaries.

The Top 5 Media Residency with the ABC, in partnership with UNSW and the University of Sydney, assists upcoming academics in communicating their research through public media, including radio and online.