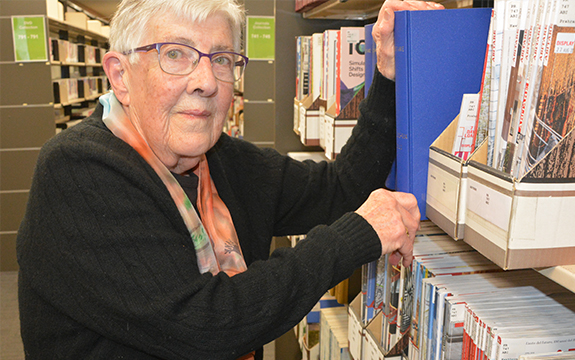 Anne Scott is one of the oldest people to undertake a PhD at Swinburne.

Born during the great depression in the early 1930s, Anne Scott grew up before modern computers and the internet were invented. In 2019, she is completing a PhD at Swinburne on the ‘Confluence of humans and smart machines: imagining a future world’ and is due to graduate in 2022.

At 85-years-old, Anne Scott is one of Swinburne’s oldest mature age students in the history of the university.

"If I did my PhD back then I would have had to use a typewriter to write a 100,000-word thesis, but I wouldn’t have even been able to do my PhD topic because computer science or artificial intelligence didn’t even exist," she says.

"Confluence means two rivers coming together to form a single river. I am researching how humans and artificial intelligence (AI) are merging and how their confluence can help solve the world’s problems."

"We think smart machines are taking over the world, and we’re all going to lose our jobs to them. I want to learn how AI has potential value in improving human life on earth, and how we can collaborate with smart machines in the workforce."

Mrs Scott’s thesis will also examine how to plan for a workforce where humans and smart machines work side-by-side with equal status as to input, autonomy and co-operation. Anne Scott will be using the computer to write her 100,000 thesis - a contrast to growing up using a typewriter.

Studying at Swinburne has sentimental value

Mrs Scott has been studying at university, mostly part-time, since 1951. She has a Bachelor of Science (1966), a Master of Education (1980) and a Graduate Diploma in Education Administration (1999) from the University of Melbourne.

After teaching at various schools in Melbourne and Sydney, Mrs Scott moved back to her childhood suburb of Hawthorn in 2017.

"Down the road from my apartment I have such a rich resource of education – a knowledge factory. I would be remiss not to utilise it," Mrs Scott says. There is also a special reason she chose to study at Swinburne.

"I have a sentimental attachment to Swinburne. I went to school just down the road in the area, and my father taught English and Social Studies in the 1930s at the foundation institution Swinburne Technological School." 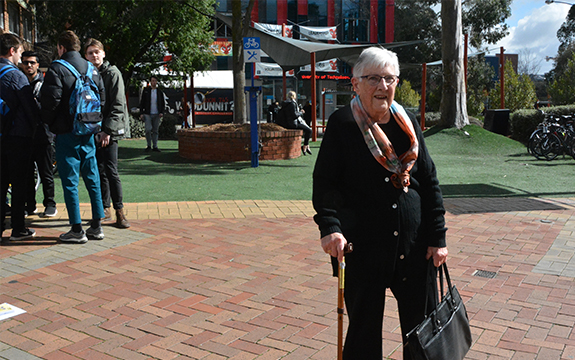 Anne Scott enjoys meeting people of all ages while she is studying.

Mrs Scott says she started studying a PhD at Swinburne to maintain an active brain, explore new fields of interest and learn from those younger than her.

"When I think of my brain, I think use it or lose it. Being old does not mean being irrelevant. People my age are in nursing homes, and here I am studying a PhD. I think of study and learning as anti-ageing therapy for me," Mrs Scott says.

"I want to set an example for senior and retired people that learning is lifelong and you’re never too old to study."

Mrs Scott has three children and four grandchildren and is following in her two sons’ footsteps, who both have postgraduate qualifications.

"When I told my friends and family I was going to start studying my PhD, I thought they would all say, 'tell her she’s dreaming,' but everyone has been encouraging and supportive and my family are looking forward to coming to my graduation ceremony!"